Why we worship Durga during Navratri

The conch in her hand symbolises the divine cosmic sound, Om.

Hinduism is probably the only religion that identifies the supreme god with a feminine form. According to Hinduism, the supreme lord called the Brahman, is a formless character. Durga, the mighty feminine goddess who is addressed as the mother in the Hindu texts gives weight to the fact that the feminine form is also as important as the masculine.

In the absence of the feminine, the masculine serves no purpose in nature and vice versa. There lies the key to its importance. So, why only the Nirguna Brahman will be represented as a male god?

That's the reason in Hinduism, the Supreme God is represented both in masculine and feminine forms. The Bhagavad Gita talks about Bhagwati, the feminine form of Bhagavan (God).

The Saguna form of the Brahman is divided into — the trinity, which comprises Brahma, the creator (not to be confused with the Nirguna Brahman), Vishnu, the preserver and Shiva, the destroyer. The Saguna form — Shakti or Adi Shakti — is also called Durga.

Shakti is the principal energy maintaining the balance of the universe. According to the Bhagavad Gita, it is the Shakti present in the nature in the form of Prakriti.

Maya, the illusion is actually the power of Adi Shakti, which resides in Prakriti (nature). There are many names of Adi Shakti like Parvati, Kali, Chamunda, Kamakya, Jagadamba, Gayatri, Savitri et al. However, Durga is the most common.

The word “Durga” found in the Rigveda, is formed from two words “dur” and “gam”. It means a fort that is difficult to pass. Devi Durga protects the world just like a fort protects the empire. According to Puranas, Adi Shakti also called Para Shakti, killed a demon named Durgamasur. Thus, the goddess got the name Durga.

The goddess Shakti either has eight or ten hands. The Devi Suktam from the Rig Veda glorifies Devi as the Supreme mother who is the Brahman and the eternal consciousness present in all living creatures manifested from herself.

The Devi Mahatmya text also called the Chandi Paath in East India (West Bengal, Tripura and Assam) and Bangladesh, narrates stories of Devi Durga. The text though exists as an independent text, however is the part of the Markandeya Purana, one of the 18 major Puranas. 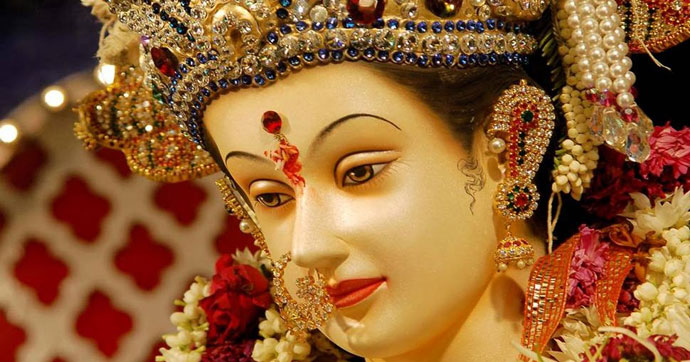 There are four navaratras — Sharada Navratri and Chaitra Navratri being the most prominent.

Durga has many forms. As Mahakali, the goddess of darkness she drinks the bloods of Rakhtbeej, to prevent the birth of new demons from each droplet of the demon’s blood. She in the form of violent Chamunda kills the demons. She as Kaushiki, the dark coloured goddess, kills the twin demons Shumbha and Nishumbha. Durga represents the knowledge in the form of Saraswati who is the wife of Lord Brahma and wealth as Lakshmi, the wife of Lord Vishnu. As Parvati, she represents the character of a perfect wife full of love and devotion for her husband.

Shiva and Parvati's jodi is regarded as the most perfect one in Hinduism. Parvati performs the cosmic dance along with Nataraja (Shiva), responsible for maintaining the balance of the Universe. Ardhanarishwar, the union of Shiva and Adi Shakti, is regarded as the main source of universal energy. She is also mentioned in Bhagavata Purana as Yogmaya. Her mount on the lion or the tiger represents bravery.

The conch in her hand symbolises the divine cosmic sound, Om.

There are four navaratras — Sharada Navratri and Chaitra Navratri being the most prominent. It is said that King Suratha got his lost kingdom back after worshipping goddess Durga during the month of Chaitra. The devotees worship the goddess for her divine blessings and guidance. The nine days are very special for the goddess, in her nine avatars, blesses devotees who worship her with a pure heart.

As Shailaputri, she is the lovely and obedient daughter of mount Himavat and as Brahmacharini, she represents salvation from all earthly bonds. Durga as Chandraghanta depicts beauty, grace and bravery. In the form of Kushmanda, she represents the cosmic egg of the universe. She is the mother of Kartikeya as Skandamata and the slayer of the demon Mahishasura as Katyayani.

In the form of Kalratri, she symbolises darkness; the slayer of the negative energies. Mahagauri — goddess Durga’s eighth manifestation — is the symbol of beauty and purity. In her ninth manifestation as Siddhidatri, she represents peace, knowledge and supernatural power.

The nine days of Navratri offer devotees the chance to seek blessings from goddess Durga through offerings of fruits and flowers. The rituals and observances carried out during the period teach humans the importance of temperance, which is very helpful in day to day life. The period brings peace to the minds of devotees when they perform pujas and yagnas for the goddess.

Ultimately, it can be said that the devotees worship Durga to gain positive energy, to cleanse their mind so as to attain purity and salvation. A pure mind helps devotees concentrate on their routine. That’s why Hindus celebrate the nine-day festival Navratri, taking time out from their busy schedules to revere the nine incarnations of goddess Durga.

Post your comment
#Durga, #Mythology, #Goddess Durga, #Navratri
The views and opinions expressed in this article are those of the authors and do not necessarily reflect the official policy or position of DailyO.in or the India Today Group. The writers are solely responsible for any claims arising out of the contents of this article.

The writer is a freelance contributor who writes on politics, foreign affairs and Indian mythology.