Why Hanuman Chalisa is the most powerful expression of personal Hinduism

One of the things that catch your eye in the middle of a horrifyingly crowded Mumbai local train is the sight of people sitting or standing in a corner, reading from a tiny chapbook sold in roadside shops near temples. Most popular of these chapbooks is the Hanuman Chalisa.

In the midst of the crushing inhumanity that is urban life, you see a glow on the reader’s face. It is the most powerful expression of personal Hinduism that one can encounter on India’s streets.

I have always wondered what the Hanuman Chalisa is and what is in it that makes it so popular. Its language — Awadhi — is an old dialect of Hindi, one of the many languages of India. Do people reading it understand what they are reading? Or does the gentle poetic rhythm calm the nervous heart, as it prepares to face the day? Or is it simply a ritual exercise, where the point is to do, not think or feel?

So I decided to explore this popular religious work through which a Hindu god is made accessible to the masses. I realised that reading this chapbook is completely voluntary, as in all things Hindu. It is neither a commandment of a guru, nor a prescription of a priest. Its popularity is organic. Its ordinariness makes it sublime.

As I explored this work, I realised each line allows us to leap into the vast body of Hindu thought, a heritage of over 4,000 years ago, much as Hanuman leapt from his cradle to the sun, or across the sea towards Lanka, or over land towards the mountain bearing the Sanjivani herb, always returning to find Ram. From the particular, we traverse the universal, and finally return to the personal.

As you go through the 43 verses in this book, you will notice how sensitively the poet has structured his work, how it creates a temple in the mind, and enshrines a deity in that temple, and how the verses take us from ideas of birth, through ideas of adventure, duty and glory, to the ideas of death and rebirth. In my work, I have always avoided the academic approach, as scholars are too busy seeking "the" truth while I am interested in expanding "my" truth and the truth of my readers. If you seek 100 per cent perfection, you often lose 99 per cent of readers in cantankerous and often self-serving debates; but if you seek 90 per cent perfection, you are able to reach out to over 90 per cent of readers through thought-provoking elaborations that seek not to convince but to enrich. And that is good enough for me.

Hence I present to you my Hanuman Chalisa, firmly anchored in the belief that:

Why Monkey as God

In this verse, Hanuman is addressed for the first time by his most popular name, Hanuman, and identified as a monkey (kapi). Classically, Hanuman means one with a wide or prominent or disfigured jaw, indicating a monkey. Colloquially, in the Hindi belt of India, the name means one without ego, pride and inflated self-image (maan), a meaning that makes sense when we appreciate the structure of the epic Ramayana, where Hanuman appears for the first time.

Some scholars have proposed that the word Hanuman comes from a proto-Dravidian word — an-mandi, which probably means male monkey — later Sanskritised to Hanuman. They also point to Hanuman being called Anuman in Thailand and Andoman in Malaysia, lands where Dravidian culture spread a long time ago.

It has even been proposed that the Andaman Islands in the Bay of Bengal got its name from sailors who told stories of the great monkey who had the power to leap across the sea and reach distant islands. Those familiar with early Tamil Sangam literature dispute this theory.

The Ramayana reached its final form roughly 2,000 years ago, and is one of the first epics to be composed in India with the intention of communicating Vedic ideas to the masses. It marks the birth of a new phase of Hinduism known as Puranic Hinduism, which is also marked by the rise of temple culture.

Before the Ramayana, for over a 1,000 years, maybe more, Vedic ideas were communicated using chants, melodies, rituals and conversations, not stories. This had a limited audience, the intellectual elite, such as priests, philosophers and aristocrats, with ample time on their hands. To reach out to a larger audience, Vyasa—the man who is credited with organizing Vedic hymns — composed the stories and epics compiled in the Puranas, including the story of Ram. 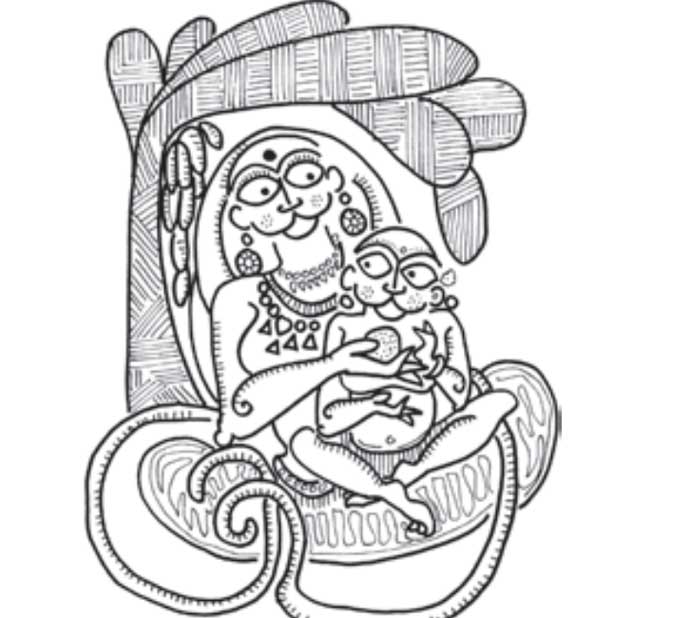 Some say Vyasa composed the stories himself, some say he compiled stories he heard from other sages, like Markandeya, and still others say he heard it from Shiva, or from the birds and fish who in turn had overheard the conversation between Shiva and Shakti. Amongst the birds was a crow called Kakabhusandi who told the story of Ram to the sage Narad who passed it on to the sage Valmiki, who transformed the story into the world’s first poetry, which is why the Ramayana, the maha-kavya, is also called adi-kavya.

In the Ramayana, we find three sets of characters. In the north are the humans (nara) in Ayodhya, led by sages (rishis) who seek to enable humans to expand their mind, discover their divine potential (brahmana), which is the essence of Vedic wisdom. In the south, beyond the sea, on the island of Lanka are the demons (rakshasas) led by Ravana, son of a rishi (Vaishrava, son of Pulastya), who uses Vedic knowledge for power, and fails to internalize Vedic wisdom. In between, live the monkeys (vanaras).

Words like "north" and "south" in the Ramayana need to be read metaphorically, not literally, because Vedic thought is all about the mind, and seeks to inform how we ‘see’ the world. Ram is a metaphor. So is Ravana. So is Hanuman. The Ramayana takes place in the landscape that is our mind.

In nature, animals, including monkeys, compete for food, and so dominate and mark territories to secure their food. All behaviour is aimed at ensuring the body survives. This is the jungle way (matsya nyaya). To outgrow these animal instincts is the hallmark of humanity; it is our divine potential.

To walk this path is dharma. But when we indulge in competition, domination and territoriality, we become worse than animals; we become demons, who subscribe to adharma. Ram embodies dharma. Ravana embodies adharma. Hanuman, from amongst all the monkeys, makes the journey towards Ram.

The world is composed of the self (sva-jiva) who lives in the ecosystem of others (para-jiva). For animals, monkeys included, the other is predator or prey, rival or mate. But humans have the ability to outgrow these hardwired animal instincts. The "north" in the Ramayana is the highest potential that we can realise — where the self is not consumed by its own hunger for, and fear of, the other, but by empathy for other people’s hungers and fears. This caring world is the world of Ram.

The "south" in the Ramayana is where there is so much hunger and fear that the other is seen only as food and enemy, and the self (jiva-atma) twists itself and transforms into the ego (aham), unable to appreciate the divinity in the other (para-atma), hence the continuum of divinity that permeates the whole infinite universe (param-atma). This self-indulgent world is the world of Ravana. The rishis, who Ram defends, are sages who go from the north to the south to enable, empower and enlighten the hungry and the weak. They know that the other will see the sages from the north either as invaders or as patronizing benefactors, who seek to destroy their way of life. The rishis also know that should their wisdom slip, they will themselves be enchanted by the knowledge and power they are revealing.

Ravana, a son of one such rishi, embodies what can go wrong. Ravana uses his great strength, knowledge and intelligence to exploit those around him, be their lord and master, make them followers, rather than liberating them to find their own path. The liminal or in-between space between the north and the south is the land of the monkeys, our animal core, that can move either way, towards Ram or towards Ravana, towards empathy or towards exploitation, towards dharma or adharma.

The hungry and the frightened seek combat and conquest, hence vijay — victory where someone is defeated. The wise seek a different kind of victory, jai — where no one is defeated, where the self is able to conquer its own hunger and fear to acknowledge, appreciate, even accommodate the other. Both jai and vijay seem to mean the same thing, "hail" or "victory", but there is a nuance in the meaning, the preference for internal victory in the case of jai over external victory in the case of vijay. This jai is what we want for Hanuman, and from Hanuman, as we read the Hanuman Chalisa.

Many people are uncomfortable with such symbolic, structural, or psychological, readings of the Ramayana and want it to be historical. So vanara becomes forest (vana) people (nara), or primitive (va) humans (nara). They see north as the Aryan homeland in the Gangetic plains and the south as the Dravidian homeland south of the Vindhyas.

Such rationalisations are often seen in people who are unable to differentiate the physical from the psychological, the measurable (saguna) from the non-measurable (nirguna), the form (sakar) from the formless (nirakar).

Since the world is diverse, diverse readings of the Ramayana must be appreciated with empathy so that we appreciate the diverse needs of the human mind.