Why are Hindus so ritualistic?

Hinduism is full of rituals. There is the Vedic yagna, where formless celestial deities are invoked. There is Agamic puja, where divinity is seen in an icon that is treated as a guest – invited, bathed, clothed, fed and adored. There is the samskara - the rites of passage like marriage, birthdays and death. There is the utsava - the festivals celebrated annually. There is vrata or disciplines observed on particular days. Some are obligatory, some voluntary. Some rituals are fixed by the movements of the sun and the moon, and others are unplanned. Rituals are full of colour and fragrance, gestures and songs, stories and performances, and food, music and clothes. They make Hinduism visible. Without them, there is no Hinduism to see, hear, smell, touch or taste. 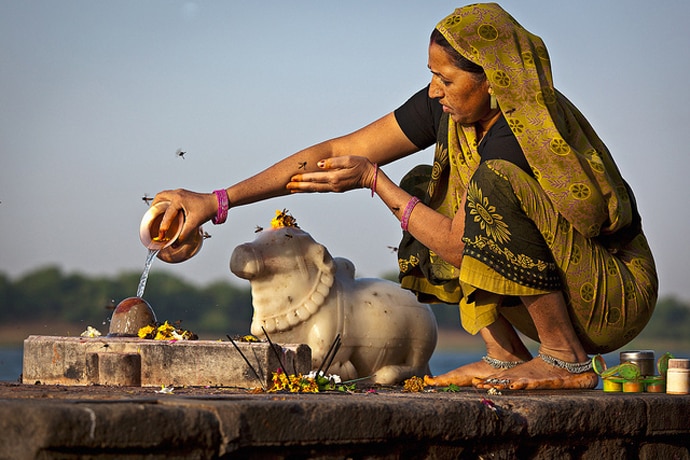 But rituals are not unique to Hinduism. All humans are ritualistic. A ritual is essentially a language, a way of communicating through formal, choreographed gestures. For example, a salute in the army is a ritual to acknowledge rank seniority. A ritual is one of the ways in which a culture transmits ideas over generations. The transmission of a ritual is often separated from its understanding. Whether it makes sense to you or not, you are obliged to perform the ritual for the benefit of future generations who may see the sense of it.

At a sheer mechanical level, even without any understanding, a ritual binds us to a community. For example, the ritual of namaaz binds the entire Muslim community. Whether the ritual makes sense or not, whether the arguments provided by people about its origin and meaning appeal to the rational mind or not, the simple act of performing it identifies the individual as part of a community.

Rituals can be religious or secular. For example, a puja is a religious ritual. A birthday party is a secular ritual. Both have a set of rules that have to be followed. Sometimes the rules are rigid: for example, the way a Catholic priest conducts his Sunday Mass is determined by the Roman papacy, and the way birthdays of employees are celebrated is determined by a corporate HR department.

In the 19th century, in an attempt to make Hindus defensive, European Orientalists came up with the idea that religious folk are primitive - and hence ritualistic - while educated folk shun rituals. A ritual was attributed to ideas like God. This word was not used for various rituals designed to evoke faith in secular ideas like the state. Think of an Independence Day parade: it is no different from a jayanti celebration. Both contribute to the creation of communities - secular or religious. The former evokes patriotism and the latter evokes devotion.

In Vedic times, performing yagna was considered karma and dharma. Later, the words karma and dharma applied to social activities. Thus, marriage was made ritualistic and obligatory, binding the man to a larger community, which included his ancestors and even the gods.

Rituals can be seen like art. Like art, a ritual communicates viscerally, through the body, and not through the spoken word. You sense it. You feel it. Wisdom rushes into the body via sensory organs and through the evoking of emotion. You can witness it – like witnessing a puja. Or you can participate in it. But if you see it as a tourist, with detachment, it will not evoke the response it evokes in someone who lets the art overtake him. The same happens in a museum: some people respond to the art, because they open themselves to the art, while others don’t see the point.

Rituals also perform the important function of filling one's time, so that the mind is distracted with activity and not bored. Thus, every Sunday, Christians go to church. The obligation structures the time of the family and the community. It creates a repetitive rhythm. For Hindus, the annual procession of festivals binds the community together and marks the march of time, and enables them to look forward to something. If the time before the rains is marked with Shivratri and Holi, the time after the rains is marked with Diwali and Dussehra.

Rituals can be suffocating and stifling as they are based on obligation, not free will. One is often forced by family to perform a particular ritual. For people who are independent, this can be torturous. But for those who need to be part of an ecosystem, this plays a key role in making them members of a social group – family, caste, tribe, or company. Sometimes, we immerse ourselves in a ritual, and then we feel nourished by it, and don't feel bad as we are part of the performance art. So there are good and bad aspects of this language called ritual. As long as we are human, as long as we want to bind humans to a community, as long as we want to feel that life has a pattern and predictability, we need rituals.

#Vedic India, #Hinduism
The views and opinions expressed in this article are those of the authors and do not necessarily reflect the official policy or position of DailyO.in or the India Today Group. The writers are solely responsible for any claims arising out of the contents of this article.