Is Buddha an avatar of Vishnu?

For Buddhists, Buddha is not an avatar of Vishnu. For Hindus, he may be.

Buddhism rose in India 2,500 years ago. It played a key role in spreading monastic ideas across the subcontinent. Before Buddhism, the focus on religious life was the yagna ritual in which gods were invoked for material gains. Great value was placed on social obligations such as marriage and children. Introspective ideas were restricted to the intellectual communities. Buddha changed the rules of the game, and discussed ideas of desire and suffering with the common folk, inviting them to join the community (sangha) of monks and live in monasteries (viharas) where one could get wisdom (bodhi) that would grant peace and freedom. This became highly popular. The old ways were being abandoned.

In response, Vedic Hinduism reframed itself to become Puranic Hinduism, which brought hermit wisdom into the householder's life. While Buddhist scholars focussed on negation of life, hence zero (shunya), Hindu storytellers spoke of affirmation of life, hence infinity (ananta). Life was full of joy and pleasure. The wise were not those who renounced the world; the wise were those who participated in the world, without getting attached to it. Stories of such wise men were retold in epics like Ramayana and Mahabharata. In temples, rituals celebrated the marriage of gods and goddesses. Beauty and pleasure found displays on temple walls. People spoke of the wise god, Vishnu, who preserves the social order, and does not destroy it as monks do. 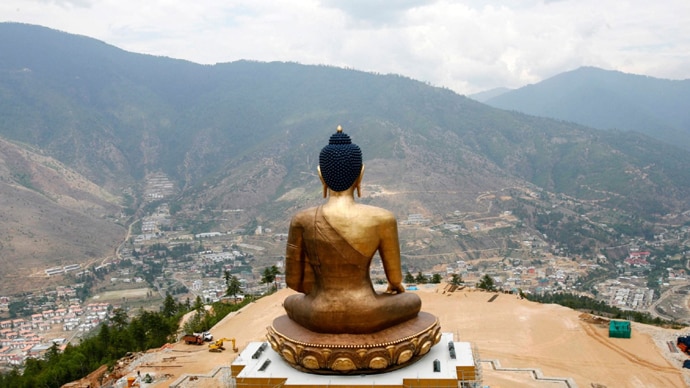 The wise were those who participated in the world, without getting attached to it. Photo: Singye Wangchuk/Reuters

In Puranic lore, composed around 1,500 years ago, while Brahma creates social order, he and his children (for example, Indra) are not at peace with the world. Shiva renounces the social order, becomes a hermit, and is at peace. Shakti marries Shiva and gets him to participate in social life, but he remains a reluctant participant, unable to appreciate social norms. Vishnu is a fruitful member of the society, taking various mortal forms (avatar) - at times priest (Vaman), at times king (Ram), at times cowherd (Krishna) - living life fully, wisely, as he is enlightened in the ways of the Veda.

Clearly, for more than a thousand years, Buddhism and Hinduism were rivals. But they influenced each others' philosophies and mythologies. Adi Shankaracharya was accused of being Prachanna Bauddha, masking Buddhist ideas in Vedic lore, for example; and Buddhist concept of heaven and hell reveal a strong Puranic influence. The value placed on the household by Hindus, led to the old Theravada Buddhism transforming into Mahayana Buddhism, where greater value was placed on Bodhisattva, who is more compassionate and understanding of human material desires than the enlightened Buddha. The importance given to hermits by Buddhists led to Vedic Hinduism - which valued pitr-rin (debt to ancestors that was repaid with marriage, children and family life) - to give greater importance to gurus who embraced celibacy and renunciation, such as Shankara and Ramanuja, and created monasteries (mathas) much like Buddhist viharas. Buddhists told stories of how the Adi Buddha manifests himself as Buddhas and Bodhisattvas for the benefit of humanity, an idea that mirrored the popular concept of avatar found amongst Puranic Hindus. Thus, for a long time, Hinduism and Buddhist mingled and merged.

It must be kept in mind that this differentiation between Hinduism and Buddhism did not matter to the common folk who worshipped both simultaneously, and did not distinguish between the two. In Thailand, we find temples that celebrate Buddha and Ram simultaneously as parts of the same discourse. The divide mattered to the Brahmin community, and to the monastic orders, who were rivals seeking royal patronage for their rituals and temples, and for the monasteries. Also, words like Hinduism and Buddhism that we use today emerged in colonial times, in 19th century. Before that, the words used were more caste-centric. The argument was whether one followed the ways of Buddha or the ways of Brahma (that is, the Vedas) or Shiva and Vishnu (that is, the Puranas).

Initially, followers of the Vedas (Nigama traditions) were opposed to followers of the Puranas (Agama traditions) as they valued yagna rituals over the puja rituals of the temple. But gradually, the Nigama and Agama schools merged, and the brahmachari-sanyasi acharyas became heads of monastic orders as well as temples. This happened about a thousand years ago. Around this time, Buddha came to be seen as an avatar of Vishnu. However, this Buddha was not Gautama Buddha of the Buddhists.

In some texts, such as Bhagvata Purana, Vishnu takes the form of a hermit to trick asuras away from Vedic rituals, enabling devas to defeat them. Here, the hermit is associated with Buddha as well as Jina (from the monastic Jainism, another rival religion). In other texts, such as Gita Govinda, Vishnu takes the form of a hermit to save animals from animal sacrifices, referring to the idea that at least some Vedic sacrifices involved offering of animals (an idea that many orthodox Hindus reject and see as wrong interpretation). Over time, Vishnu’s ninth avatar was seen as the hermit, perceived by some as Buddha and by some as Jina. This was, perhaps, a strategic move to get many Buddhists and Jains to become a part of Vaishnavism, and later Hinduism. Or maybe it was a sincere move to show how, sometimes, to save the world, Vishnu has to renounce the world and become a hermit-teacher.

For the Buddhists, Sakyamuni Buddha is a historical figure who lived 2,500 years ago, and a metaphysical figure (Adi Buddha) who manifests as the compassionate Bodhisattva for the benefit of humanity. There is no Vishnu, or Shiva, in their worldview. Different truths exists in different periods of history and different geographies of the world. We need to respect the faith of the faithful, rather than imposing our views about who Buddha really was or was not. And, it is important to recognise the politics underlying such assertions.

Also read: What Alexander the Great learnt from a Hindu ascetic

#Hinduism, #Devdutt Pattanaik, #Buddhism
The views and opinions expressed in this article are those of the authors and do not necessarily reflect the official policy or position of DailyO.in or the India Today Group. The writers are solely responsible for any claims arising out of the contents of this article.