Beyond 36 Chowringee Lane: How once-diverse Calcutta shrunk to Kolkata where secularism now means putting on a veil

The Calcutta I grew up in was truly diverse, home to Parsis, Jews, Armenians, Anglo-Indians and many other communities. Somehow, 'minority' came to be thought of as only one community. Why?

By 'minorities', we only tend to think about Muslims — that is a mistake. There are Christians, Parsis, Sikhs, Jains, Buddhists, agnostics, atheists who are all citizens of this country. Members of the LGBT community, too, are a minority with voting rights.

So, when we talk of 'appeasing' only the Muslims, it is a distorted view.

However, that is what our leaders tend to do.

Mamata Banerjee is accused of appeasing the Muslims to increase her vote bank. That is true to some extent. But the BJP are equally guilty of appeasing the Hindus. All our leaders are equally guilty of not keeping religion and politics apart. Even Indira Gandhi used to visit various places of worship. There's nothing wrong in that per se. Leaders are also human beings who have a right to their faith, whatever it may be. But when a known face visits a dargah and a temple and a church and a Sikh gurdwara, one begins to wonder whether it is really faith or vote bank politics.

What is the need for all this?

Does secularism mean tolerance of all faiths? Certainly! But it does not mean a 'show' of adherence to all. To my mind, religion, like sex, is the personal business of any individual where the state does not and should not have any say whatsoever!

The Kolkata we grew up in — then known as Calcutta — was a very diverse, secular, pluralistic and tolerant place. 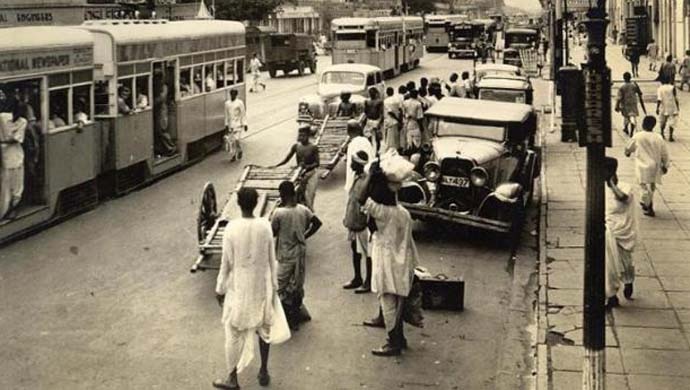 Once Upon A Time: Calcutta of yore was a bustling, diverse and truly secular mahanagar. (Photo: India Today)

Not only were there Hindus and Muslims living in harmony, there were Christians, Jews, Armenians, Anglo-Indians, Parsis and a host of other diverse peoples as well.

I remember an Armenian couple who owned the Fairlawn Hotel where Shashi Kapoor, Jennifer Kendal and Ashok Mehta had put up during the shooting of 36 Chowringhee Lane in the December of 1980. We used to call them Ted and Vi (short for Violet, I think). Fairlawn had become our second home where we used to even hold our production meetings for the film.

They used to serve the best and thinnest Melba toast I've ever tasted, and we invariably stayed back for dinner! There was a Jewish gentleman called Vahan Sukias (apologies in advance if I've got the spelling wrong) who used to have a lovely furniture store on Park Street called Little Shoppe. It stored the most beautifully crafted and highly polished colonial furniture imaginable at the most exorbitant prices! There was (and still is, unless they've changed the name) a street called Sukia Street. There still is a confectionery store in New Market called Nahoum's. It belonged to the Nahoum brothers with whom we became quite friendly.

All our birthday cakes used to come from there since my childhood.

Later, while making a short docu-feature series on Kolkata, I visited the Jewish Synagogue — which is breathtaking in its beauty with blue Castillian tiles and splendid chandeliers. David Nahoum, who has now passed on, informed me ruefully that they could no longer find a quorum of nine Jewish males to hold their services.

There was in my Calcutta of that time the tradition of gathering for midnight mass on Christmas Eve at St. Paul's Cathedral — I wonder if anyone does that anymore!

That Calcutta is vanishing, perhaps has vanished forever, not only because of appeasement politics, but because of the digital age that ushered in so many other forms of entertainment that appealed far more to the youth of the city than those innocent pleasures!

Mamata Banerjee had meanwhile come into power with a huge popular mandate. There was no need for her to don a veil to show solidarity with Muslims. Good governance would have been enough. Why were Muslim youths not penalised when they broke traffic rules? That has angered many Hindus. But, it is also true that she managed traffic control during the Durga Pujas in a way that no CM had ever done before her. So there are many angles to this entire business.

It is not a black and white situation.

What I rue more than ever is the loss of that diverse, crazy, tolerant, argumentative, secular, fun place that was once my city.

Both the TMC and the BJP are responsible, perhaps in equal measure, for that. Why must we deny history? Are the Moghuls and the British not a part of our past? Did they not leave their culture, their art, their architecture and their traditions, which have mingled with ours and enriched it?

Are we now going to become a riot-torn place where the Hindus and Muslims will be at each other's throats the whole time, or are we moving towards becoming a homogenised citizenry who will speak only in Hindi with "Jai Shri Ram" on our lips? A place where there is no room for the agnostic, the atheist, the Christian, the Zoroastrian and the Muslim?

Also read: Didi vs Perfect Storm: Why West Bengal's Trinamool Congress may soon reach a point of no return

#West Bengal, #Muslims, #Mamata Banerjee, #Aparna Sen
The views and opinions expressed in this article are those of the authors and do not necessarily reflect the official policy or position of DailyO.in or the India Today Group. The writers are solely responsible for any claims arising out of the contents of this article.

The writer is an acclaimed actress, director and screenwriter.