Not kheer, Rampuri gulathhi is fereni but with a twist

The rich milk and rice sweet dish, gulathhi, finds no mention in ancient recipe books but here, it plays an important celebratory cuisine in a love story.

The disappearance of gulathhi from the ancient, wheezy refrigerator and Mehrun’s elopement were two mysteriously entwined concomitants.

Did the creamy, rich gulathhi inspire the lovers and did they run off with the bowl of the sweet? I imagined them sitting in a verdant garden, where all runaways went, their hands dipping into the creamy delight, laughing.

The angry outrage at the elopement was fuelled by the loss of the precious sweetmeat sent by our neighbour, a leftover from their daughter’s wedding feast. The children had been warned away from the large earthen bowl of gold-white gulathhi sprinkled with green pistachios, dark raisins and shimmery silver warq. We had planned a whole dinner around it – a treat postponed and ultimately denied. It all began when one of my kind-hearted aunts decided to take along Mehrun to watch Umrao Jaan with us. Perhaps she had earned the treat by making really good tea, boiling it thrice over, or had just caught Khala in an indulgent mood and tagged along. Mehrun, all of fourteen, was enthralled. She wanted to become Umrao Jaan, obsessively listened to the songs, entertaining us with her clumsy imitation of the diva’s dance moves, her glass nose pin glinting on her dusky face. Her favourite line was, ‘Mushkil nahi hai kuchh bhi agar thaan lijiye. (Nothing is difficult if you are determined).’

My God-fearing Khala was appalled and tried to make Mehrun understand that Umrao Jan was a bad woman and such women would burn in hell. But how could such glamour, as against her slovenly life, be bad in any way.

Around that time, things started disappearing from the fridge. Apples and tomatoes were ignored in a family of seven ever hungry children and long hot summer afternoons. But the disappearance of the gulathhi bowl, stuffed with great effort into the cavernous fridge, was cataclysmic. It all added up – stolen moments and purloined gulathhi – sweet and dreamy as first love. 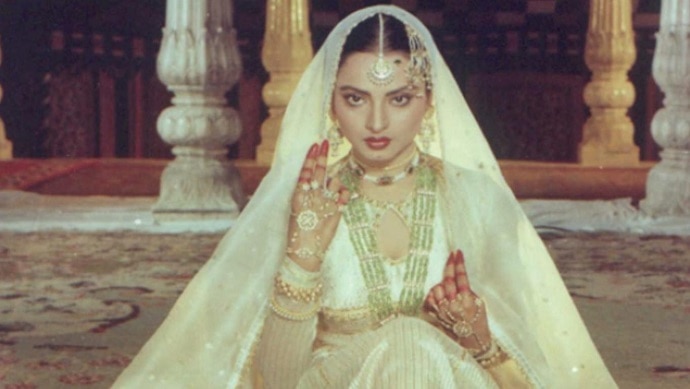 Umrao Jaan was a catalyst in this love story fuelled by the sweet gulathhi. (Photo: Movie Still/Umrao Jaan)

People generally confuse gulathhi with fereni or even kheer. After all, it is basically a rice and milk sweet dish, and how far can one go with the ancient marriage of the simple ingredients. Risking gastronomic snobbishness, I would say that the Rampuri gulathhi differentiates itself as an ostentatious fereni with a peerless twist. The traditional cooks attribute the name gulathhi to the ‘gul’ or florets, fashioned out of the caramelized scrapings left at the base of the pan, and used to garnish the dish. I like to imagine a careless cook in the Nawab’s kitchens who didn’t stir the fereni pot while it was cooking, leading to the custard getting burnt at the bottom of the degh. Maybe he tried damage control by using the scrapings as garnish and passing off the smoky flavour as an innovation. Today, famous gulathhi cooks, like Munna Bhai, create the khurchan scrapings in a separate pan. They add some gulathhi to heated ghee and let it sizzle to a red-brown garnish.

Besides the ‘gul’ trimmings, the method of preparing gulathhi is very different from fereni or indeed, the kheer. The rice is first boiled in water till tender and mashed before adding to the milk. Some recipes add a little salt or alum powder to the boiling rice to ensure that it becomes a grainy paste. For celebratory occasions, almond and cashew powder is used to give a rich, nutty flavour and round off the dominant rice taste. Khoya and cream is also added to the thickening custard.  When the gulathhi has acquired the right consistency, sugar is sprinkled as per taste. The old texts advocate preparation of qimam or sugar syrup from unrefined sugar and honey. Here is where fereni ends and gulathhi continues with its surprising, delicious twist.

A tempering of a sizable amount of ghee and cardamom is prepared in a separate pan and the custard is poured into it, simmered over a low flame, stirring constantly, till it acquires a pinkish golden blush and one can feel it congealing at the bottom of the pan with the spoon. The scrapings should not be overdone or the gulathhi will end up with a charred, burnt flavour. The use of tempering is unique to gulathhi and is never used in its precursor Persian dish, sheer biranj or fereni. 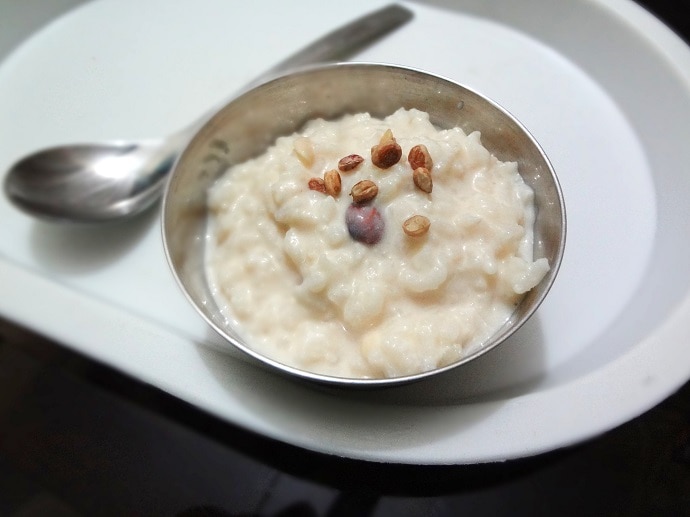 Gulathhi is often confused with kheer- a grainy cuisine made with rice, sugar and milk. (Photo: Wikimedia Commons)

Gulathhi is finally set in earthenware bowls and garnished with finely diced and fried cashews, almonds, pistachios, raisins and the inimitable gul from the khurchan. The freshly made, large, flat bottomed clay bowls have to be soaked in water for a few hours so that they don’t pull out the moisture from the gulathhi. While the fereni dribbles thickly from the spoon when served, gulathhi will be in the form of thick globules. The consistency at the end is completely different as is the colour. One can only elaborate the intended texture of the dish by the word ‘lathh’ which would roughly translate to a thick paste capable of smearing –lath-path.

Since it is crucial that the sweetmeat should set well in its bowl, the inexperienced cook tries to achieve consistency by adding too much rice. This is a cardinal mistake and leads to the regrettable dominance of rice. In fact, dry fruits, kewra and cardamoms are used to balance the rice aftertaste. The scrapings of khurchan give it that unique smoky aroma which blends into the light earthy scent of the bowl. The dish has a rich, creamy sophistication which the fereni doesn’t aspire to.

The Indian kheer, a food fit for the gods and the baby’s first solid meal, mentioned in the Ayurveda has been cooked in the subcontinent for centuries. Rice and milk sweetmeat variations are still popular. The traditional Indian kheer has whole rice grains in milk and a grainy texture. The fereni, tends towards the more homogenous, thick, though still grainy side due to the use of soaked and ground rice. Both gulathhi and fereni have their probable antecedents in the Persian sheer biranj consisting of the twin elements of sheer (milk) and biranj (rice). Sheer biranj is said to have revolutionized the basic rice and milk dish by turning it into a cold sweet and adding rosewater, cardamom and dry fruits. However, the Persian sheer biranj doesn’t have any sugar and is served with honey or sweet preserves. The Afghani version of sheer biranj uses sugar and is closer to gulathhi. Sheer biranj, as gulathhi, follows the methodology of boiling rice in water first, which gives credence to their gastronomic liaison. Gulathhi is served in earthenware especially prepared to not drain the moisture from the cuisine. (Photo: Wikimedia Commons)

Gulathhi finds no mention in the ancient recipe books on Rampur cuisine dating late nineteenth century, though there are recipes of the simpler fereni.  An interesting recipe of ‘Sheerin Pulao Gulathhi’ is found in a recipe book, ‘Haft Khwan Shaukat’ dating 1903. This is the first mention of the word ‘gulathhi’. The procedure is somewhat like that of Rampuri gulathhi. Since gulathhi requires elaborate ingredients it is more of a celebratory dish cooked at weddings and receptions. The leftovers are presented to close relatives like party favours as it is highly perishable.

The disappearance of Mehrun (and the gulathhi) broke up the tight, well-greased domestic machinery of our home. She had eloped with the cook, Zareena Bua’s no-good son. Angry, hysterical scenes and pitched battles in the servant quarters played out over the next few days, stories were whispered and half-hearted attempts were made to find Mehrun – a runaway girl was worthless, spoilt forever.

Sabira Bua, Mehrun’s prolific, perpetually pregnant mother, cut her losses and married off her younger daughter to Mehrun’s fiancé. Zareena Bua, heartbroken and isolated soon left for Pakistan. Mehrun never returned. It was rumoured that her lover left her, that she had a son and then someone claimed to have seen her at a local kotha.

Also read: Iftar and the iconic Qeema Samosa: Celebrating Ramzan in Rampur with the delicacy is one of my fondest childhood memories

#Sweet tooth, #Mughal cuisine, #Rampur, #Phirni
The views and opinions expressed in this article are those of the authors and do not necessarily reflect the official policy or position of DailyO.in or the India Today Group. The writers are solely responsible for any claims arising out of the contents of this article.