Iftar and the iconic Qeema Samosa: Celebrating Ramzan in Rampur with the delicacy is one of my fondest childhood memories

There is no other feeling in the world that can match up to the pleasure of breaking your roza with a bite of meaty, sumptuous and delectable Qeema Samosa.

Come Ramadan, and the mikes start blaring sehri wake-up calls and songs from 2:30 AM in the Muslim-dominated old city area of Rampur. Two hours to the before-sunrise meal, ladies, in the large and small, leaning on each other, houses opening into brick-laid gullies, obediently shuffle towards their kitchens to start cooking the khichdi.

Soon, the madrasa boys start clanging the door knockers, ensuring that all Muslims are up and about. 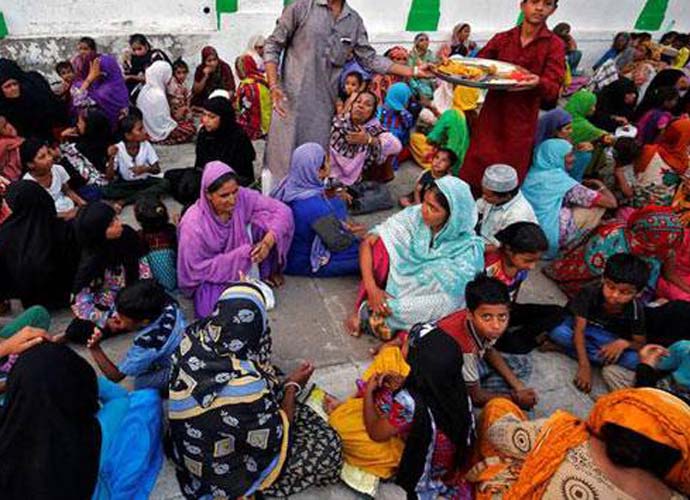 Anticipation in the air: Women breaking their roza during Iftar. (Source: India Today)

In Rampur, sehri is a complete meal with freshly cooked urad khichdi, accompanied by condiments and leftover curries. The stale roti acquires a yeasty sweet taste and the spices settle into the curries. Everything tastes surreal at that hour. Another favorite is sweet sewain soaked in full-cream milk. My cereal and toast sehri would shock everyone!

I remember the excitement of being woken up for sehri as a young person. It was after persistent cajoling that Mamma agreed to let me fast — suddenly, I was a part of the secret society of sehri-eaters, dining at an unearthly hour, whisper-talking, stifling giggles, me, trying not to wake the others with the kitchen clatter. Mamma, a great believer in the power of eggs, would bully me into eating the detested omelet. The day felt so different. I had the exalted status of a ‘rozeydaar’, the irritating young cousins were reprimanded for troubling me. I was made to rest and spared from the little housework I helped out with. But before I could float into the hallowed circle, my nani, out of her intense love, would try her best to make me break the fast. She would tempt me with ice-cold sherbet in her special silver katora, assuring me that Allah would understand, that it was too hot and I was too weak. I dodged her attempts, though a drink from the katora was a rare honour, and rushed off to school. 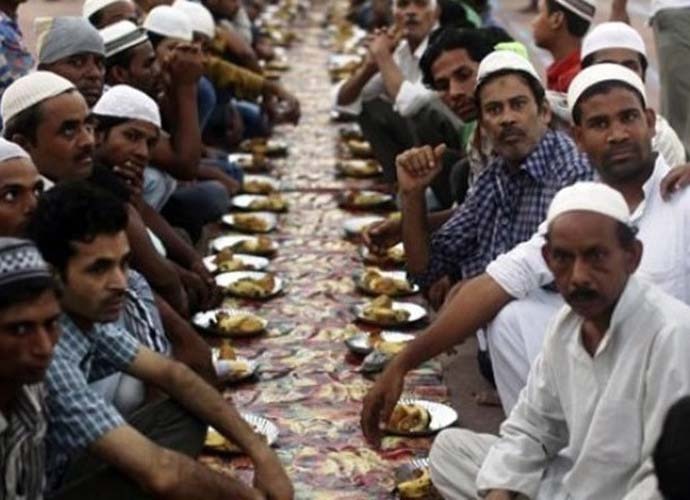 The best part was the iftar when we gathered to break the fast at sundown.

In a household of fourteen members of all ages, we had a six-chair dining table, with extra chairs added on the sides when required. Food was generally served in two shifts, except iftar. On the day I kept roza, I would be seated on the ‘main’ chairs with everyone fussing over me. The younger siblings and cousins would wait around with their plates, trying to grab some hot pakodis and edge in a side seat.

‘Oh I didn’t feel the roza at all; only a bit thirsty,’ I would beam, hoping for another chance.

Faith and feasts converged to deliver the most perfect meals throughout the month of Ramadan. Right from iftar to the late dinner, the tongue celebrates the return to pleasure of well-planned, perfectly synchronized meals. Rampur’s cuisine is traditionally served in combinations which might not seem logical. Karhi and rice is somewhat strangely combined with meatballs in spicy gravy; pulao dictates a kabab, qorma and dahi bara indulgence; mincemeat with besan roti is another favorite; whole urad cooked with meat is paired with fried rice.

The conventional groupings with their complimentary tastes, learned through food narratives, are all laid out, ensuring deep satisfaction of a day spent in piety, ending with a well deserved meal.

Ramadan is also a season of delectable iftar-dinners with relatives and friends; from cozy home dinners to grand feasts held in marriage halls, it’s a busy social calendar. The serious feasting commences in the second half of the month. During the first half, the men are busy listening to Quran recitations in the hour-long nightly ‘tarawih’ prayers at the mosques before they can sit down to a late dinner. Few women go for the tarawih prayers, though there is a ladies’ section at the Jama Masjid. The gender split of responsibilities becomes sharper with the women thronging the bazars to get Eid clothes and the male (meat) provider engages in a frenzied quest for the choicest pieces at the butchers. The latter have their motorcycles close at hand and make a run for it if things get too chaotic!

A hush descends as the iftar siren sounds and the faithful break their fast with dates. Though in the scripture, the fasting could barely afford much more than dates and milk on a good day, we gulp down lemonade and crunch on hot pakodis, black gram chaat, dahi badas and the syrupy sweet ‘kachalu’ fruit chaat. The ‘Rooh Afza’ drink, which used to be as mandatory on the iftar table as the dates, has become too expensive for a daily appearance. The younger taste buds have also veered towards packaged drinks. However, to cool the overheated stomach, people still soak the traditional ‘tukhme rayan’ — chia seeds to drink as sherbet. Long before the chia seeds became a health fad, we were made to gulp down the slimy cool drink to beat the heat, especially during Ramadan.

As the time for iftar draws near, everyone is seized with cravings and the boys are persuaded or commanded to get chaat, kababs and the inimitable qeema samosa from the street vendors.

Iftar in Rampur has a special snack — qeema samosa, the iconic crisp triangle filled with spicy mincemeat and urgently fried at only a few shops right before the sunset. The supply is limited and the males, pious and ravenous, line up at ‘Amanat Bhai’, ‘Famous’ or ‘Mashooq Bhai’ outlets. It comes piping hot to the iftar table in newspaper packets to gladden the hearts of starving members. The older generation remark that the qeema samosas were better earlier and now, they don’t use the proper meat. For me, the greasy crisp samosa, with the spicy, green chili-laden meaty center, is beyond perfection. It is said that samosa, originating from the Central Asian traveler’s snack, ‘samsa’, was filled with mincemeat and roasted over campfire. A ninth century poem by the Persian poet, Ishaq al-Mawsili, describes the filling and frying of the ‘sambusag’, the ancestor of samosa. The Uzbek ‘samsa’ or the Persian ‘sambosag’, very similar to our samosa, are either baked or fried, the pastry often thicker and sprinkled with sesame seeds. Travelling to India with the traders, samosa became a favoured item in 14th century and Mohammad Bin Tughlaq ate a mincemeat and dry fruit filled samosa before the pulao.

The love affair continued during the Mughal period described in ‘Ain-e-Akbari’ and the Portuguese filled it with potato centers — which might have made it popular with the vegetarian populace.

Interestingly, the snack so enamored the Rampur Nawabs that a dish called ‘samosa pulao’ was prepared for the Nawab’s table — the dish was probably learnt or cooked by chefs from Delhi as similar recipes are found in old Delhi cookbooks dating late 19th century.

The samosa pulao was the yakhni pulao garnished with crisp qeema filled samosas. We can only imagine the crunchy samosas complimenting the sublime yakhni pulao. Samosa pulao, along with other varieties of the inimical yakhni pulao, now only exists in food archives. 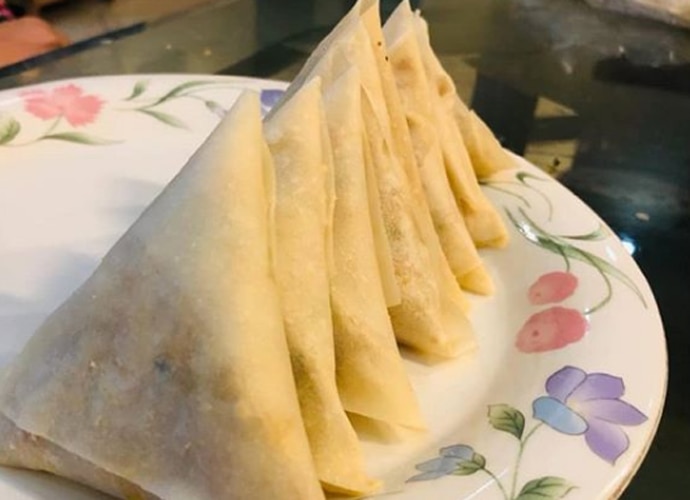 Keema Samosa: Famed for its delicacy and its crunch! (Source: Instagram/ @letscookwith_atika)

In the earlier recipes, the qeema samosas were first steamed like momos and then fried. The pastry of the samosa was prepared by kneading maida, chick pea flour and egg white. For the filling, the mincemeat, mixed with spices, was half-cooked, ground and filled into the triangles made from the pastry batter.

The samosas were then wrapped into paan leaves and steamed over a degh to harden the crust.

Finally, the paan leaves were cut away and the samosas were shallow fried.

The recipe is more complex than our simpler, everyday samosa.

Last year, my nephew tried vainly to get the iftar snack during Ramadan, but Amanat Bhai disappointed us due to, he said, unavailability of proper meat. I attempted to make the samosas from left over mincemeat, even brought the ready to fry qeema samosas — but they lacked the zest and bite of Amanat Bhai’s creations. Let’s hope this year the gentleman obliges and we can satisfy our fetish. The apprehensive aspect of another samosa-less Ramadan reminds me of Amir Khusrau’s famous riddle: