A restaurant in Delhi where every ingredient tells a story

AnnaMaya, at the Hyatt Andaz, is a destination for discerning diners who also like to celebrate Indian produce

When I first met Alex Moser last year at a food awards event, he had been in India for barely a week and was already a worried man. “I have been asked to source 401 traditional ingredients for my hotel’s upcoming all-day restaurant, and I have been able to identify just five so far,” the ever-smiling executive chef of the city’s newest five-star hotel, Hyatt Andaz, said to me. He also explained that 401 was the number of rooms in the new Rajeev Sethi-designed hotel.

A year later, Moser is a walking-talking encyclopedia of traditional products, which most of us, children of the Green Revolution, have lost touch with. And his creation, AnnaMaya, the all-day restaurant at the Andaz, is fast becoming a destination for discerning diners who also like to celebrate Indian produce — many of which, such as bajra (pearl millets) and ragi (finger millets), had become poor people’s food at a time when we were busy adapting to a lifestyle powered by polished cereals, refined sugar and saturated fats.

When you go to AnnaMaya, you don’t go for just another meal, but also to feel good about what you are eating. Moser, for instance, grows micro greens on coconut coir in glass enclosures in a corner of the restaurant.

And to disabuse people of the notion that these are mere decorative items, he has put up a chart to inform his guests about the health benefits of adding these dainties to their diet — to reinforce their nutritive value, Moser’s team cuts the micro greens according to individual orders as and when they are placed.

The tall and bearded German chef also has aloe vera growing everywhere, so when he says his aloe vera sandwich with multigrain bread is a zero-mile food option, he means it — the bread is baked in the restaurant, just as his aloe vera thrives in the colourful earthen pots that line up the shelves of the bread counter. 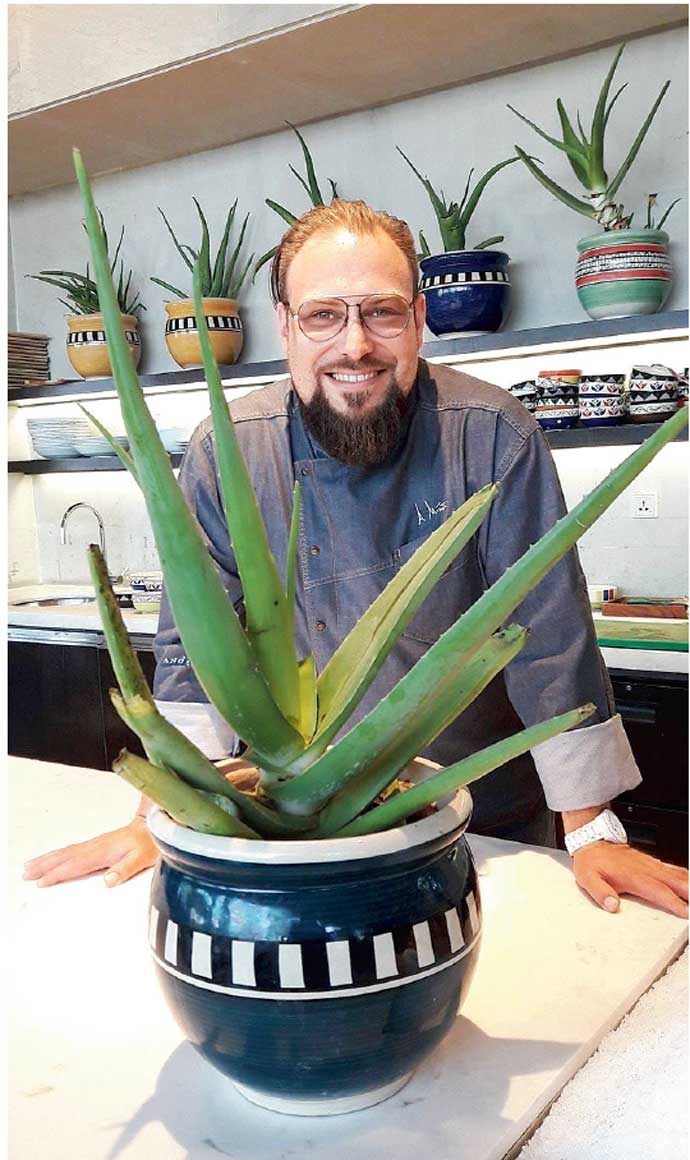 With a new restaurant opening almost every other day, and the clutter becoming disturbing, even original concepts look jaded with the passage of even a couple of months, which is why using ingredients to narrate stories is catching on as a novel way of engaging with guests.

At AnnaMaya, one of Moser’s stars on the menu is goat’s milk paneer tikka. When you dig into its melt-in-the-mouth texture, you’ll fall instantly in love with goat’s milk, in the footsteps of its most important advocate, Mahatma Gandhi. Moser sources goat’s milk from a German who has a farm in Vasant Kunj. To ensure the milk has the maximum protein content, the German farmer wakes up at four every morning to milk his goats.

Enthused by the response to the goat’s milk paneer tikka, Moser is now experimenting with camel’s milk sourced from Kumbhalgarh in Rajasthan — and he can’t wait to share the camel’s milk cheesecake he has learnt to make. All this may seem exotic, but the menu at AnnaMaya also has the most scrumptious burrata cheese (sourced from Father KL Michael in Bangalore) and diced Alphonso mango salad, bajra khichdi with a generous dollop of ghee and rotis with ragi flakes for texture, amaranth (ram dana) paranthas, and desserts made with chocolate hand-crafted from cacao beans grown in Mysore for Earth Loaf Artisan and Raw Soul Food.

The restaurant’s breakfast displays have cheeses from across the country — Gouda from the Himalayan Natural Artisan Cheese, which is owned by a Dutchman operating out of Kashmir; Camembert from Chennai; and Brie from Mumbai.

“Who am I as a chef if I cannot work with the best products?” Moser asks, and then goes on to explain how his travels across the country have exposed him to ingredients that he had assumed could only have been imported. Lime, for instance. He stumbled across the Real McCoy in a village in Uttaranchal.

Moser’s next big idea is to rid people of the bias they have against the looks of vegetables and fruit grown without any chemical intervention.

“Traditionally grown products look just the way nature had intended them to be,” says Moser. “They are neither waxed, nor chemically or genetically modified, so they don't look perfect.” The next time you're at AnnaMaya, watch for the "ugly food festival"— because "ugly" vegetables and fruit taste best.

Also read: How Delhi restaurants are serving India's biodiversity on a plate

Post your comment
#Restaurants, #Food
The views and opinions expressed in this article are those of the authors and do not necessarily reflect the official policy or position of DailyO.in or the India Today Group. The writers are solely responsible for any claims arising out of the contents of this article.