What's driving the growth in restaurant sector in India?

The industry has signalled that it would rather roll out new concepts than keep replicating established restaurants.

For some years, we have been seeing the restaurant sector in the thrall of VC/PE funds with a prodigious appetite for profits. The problem with bean counters is that they are obsessive about numbers — they equate the success of a restaurant with the rapidity with which it replicates itself across the country. The expression "scaling up" is their lord’s prayer.

It may be an exciting idea when you’re producing soap or lingerie, but a restaurant, if it’s serious about food, is the reflection of the soul of its creator, and it cannot be replicated. In India, moreover, such are market specificities, that you cannot have one-menu-suits-all concepts, such as McDonald’s or Starbucks.

The big boys learnt this lesson fast, which is why India became the birthplace of the McAloo Tikki Burger and Mutton Do Pyaaza Pizza. Even in that geographical entity, we dismiss as "the South", the chilli levels acceptable in Hyderabad are way higher than what would sell in Bengaluru and Chennai. And a cosmopolitan market such as Mumbai is divided, taste-wise, into Gujarati, Marathi, Tamil, Punjabi, Purbia, Konkani, Bohri, east Indian and Roman Catholic enclaves.

For a growing number of restaurateurs, it is a signal to invent a new growth model — that of a chain of restaurants with individual personalities, so you scale up but let each restaurant challenge your creative instincts. This is exactly what Ferran "elBulli" Adria’s brother, the famous patissier Albert, has been doing for the past five years in a once-rough neighbourhood in Barcelona with the Iglesias Brothers.

Almost every year, Albert Adria has been rolling out one new dining concept after another: Tickets, a contemporary tapas bar; Bodega 1900, a vermouth bar serving "re-imagined" snack foods; Hoja Santa, home to "elevated" Mexican cuisine; Niño Viejo, a taco bar; Pakta, a Peruvian-Japanese fusion restaurant; and Enigma, a cocktail bar. Unsurprisingly, the neighbourhood, described by someone as a “culinary theme park”, today is famous all over the world as elBarri Adria. 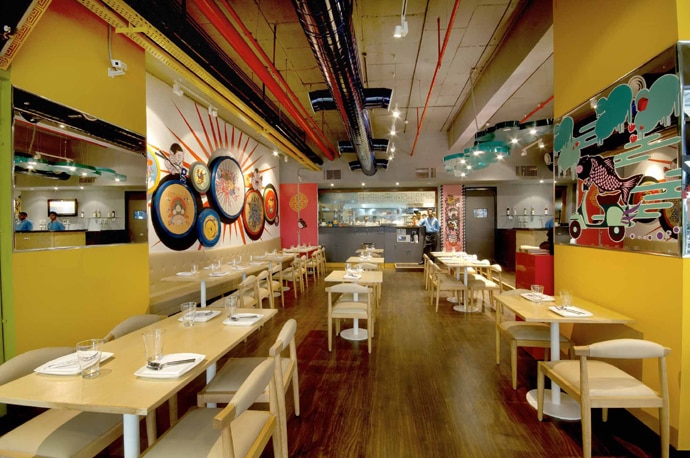 All these thoughts were swirling in my head when I met the young and successful restaurateurs Kabir Suri and Rahul Khanna at their new venture, Mr Mamagoto, at the Cyber Hub in Gurugram. Both come from families with deep roots in the industry. Suri’s uncle, Arjun Waney, is the man behind a slew of internationally well-known gourmet restaurants such as Zuma and Le Petite Maison, and he says he got his eye for detail from the founding executive chef of Zuma, Rainer Becker, who is from the family that ran The Claridges.

Instead of basking in the reflected glory of their lineage, Suri and Khanna branched off on their own, roped in Janti Dugal, for long the go-to person for "authentic" Thai food in the city, and together they opened the first stand-alone Pan Asian restaurant in the country, in Khan Market in 2010. Famous for its signature yellow entrance door, manga-inspired wall art and the much-copied rock shrimp tempura, Mamagoto’s holding company, Azure Hospitality, secured Rs 650 crore in funding from Goldman Sachs in 2015, which enabled it to acquire the Dhaba by Claridges brand and also flag off the QSR brands powered by online ordering, Speedy Chow and Rollmaal.

Today, with 16 Mamagoto outlets, eight each of Speedy Chow and Rollmaal, and six of Dhaba by Claridges, and 10 more of all four brands to open by the financial year-end, Suri and Khanna could have ploughed a predictable furrow and stuck to the expansion route, but as they said to me at Mr Mamagoto, they were itching to get out of their comfort zone.

In Bengaluru, they have launched the brand Sly Granny, which is all about a kooky decor and world cuisine. Mr Mamagoto is a bit of Nikkei cuisine and a lot of dishes they have never been known for — from the unputdownable Pokchoy Wrapped Chicken and Chickpea Edamame Bao to the Prawn Sushi Stack and Salmon Onigiri. Dugal, the "Mama" of Mamagoto, seems to be having fun with her food. Next in the pipeline are Foxtrot, which Khanna describes as “a sub-culture bar”, and an asyet-unnamed restaurant where the food will be “north Africa meets southern Spain”. There's no stopping the creative impulse.

#Starbucks, #McDonald’s, #Mamagoto, #Restaurant
The views and opinions expressed in this article are those of the authors and do not necessarily reflect the official policy or position of DailyO.in or the India Today Group. The writers are solely responsible for any claims arising out of the contents of this article.