Midnight's Most Confused Child: What Salman Rushdie's tweet on Kashmir tells us about him

Salman Rushdie feels India is committing an atrocity in Kashmir. Ironically, Rushdie would be killed on sight in Kashmir, which India is trying to protect from the onslaught of global jihadism.

“Even from seven thousand miles away it’s clear that what’s happening in Kashmir is an atrocity. Not much to celebrate this August 15th.” tweeted Salman Rushdie on India’s Independence Day.

I could scarcely believe it.

For the first time, I was forced to consider that Salman Rushdie may only be a great artiste exercising the artiste’s conceit, only for his own gratification.

Even from seven thousand miles away it’s clear that what’s happening in Kashmir is an atrocity. Not much to celebrate this August 15th.

I have been fighting for free speech because of Salman Rushdie for 31 years.

When I was 14, knew little and understood even less, I was intellectually a blank slate. My parents had the notion that children should not be indoctrinated in anything other than decency towards all people at all times, and the curiosity to discover the world for themselves. I didn't even think about dissent, social attitudes, religious attitudes or political ideologies. I thought all human beings were the same as each other.

This was until a boy my age from a village in Kashmir, related to someone in my father’s official staff, was on his way somewhere and needed a place to stay in Delhi for one night. My dad told him to go to our home. This was in 1988, before Jihad erupted in Kashmir — when Kashmir was the paradise of the legend that few now remember. This boy was as innocent, quiet, timid and polite as you might imagine a rural Kashmiri child would be, first time out of his village, far away from his family in a faraway place.

Once, we were watching television together and news about Rushdie and the Satanic Verses kerfuffle comes on.

This boy, until then, the epitome of calmness, began to get agitated.

I was surprised and expressed it. But he got angrier and angrier, and within a minute, he had turned red, his veins throbbing, eyes bulging, breathing like he was about to explode.

It was just a book, I said — and you haven't even read it. He said, "Hamare Imaan ki tauheen ki hai. Isko jeene nahi denge." 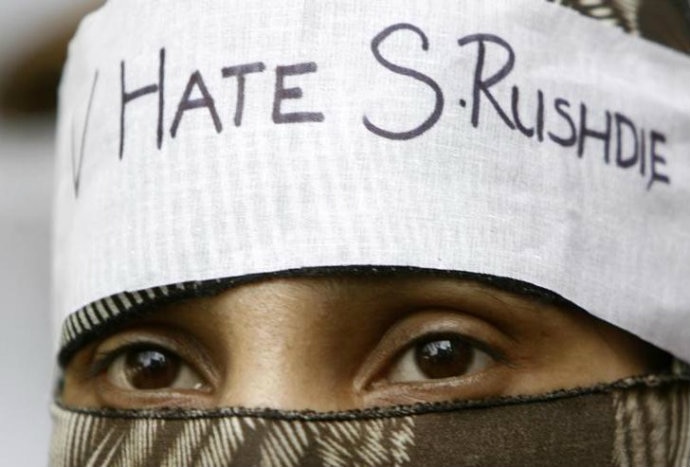 Hate, beyond reason: Rushdie was threatened with murder, all for exercising his artistic and intellectual freedom. (Photo: Reuters)

This was before the liberalisation of India’s economy. At the time, only the rarest industrialists had the money to go to England. There was only one television channel and the signal was broadcast only from 5 PM to 11 PM. There was no internet. Phone lines were so hard to get that we didn’t even have a phone. Nobody knew anything of any substance unless they obsessively devoted their lives to finding and reading material printed abroad.

But what I saw that evening, for the first time in my life, was pure unalloyed hate.

Hate that could not be reasoned with.

Hate that the passage of time could not alter. Pure existential hate.

This was not normal.

I have never seen hate so savage — hate that reached the human core across space and time, without the object of the hate having anything to do with the personal experience of the one who hated.

It was one of the most formative moments of my life.

I went to America some years later to study and work. The Rushdie story didn't go away. It gripped the existential core of the West as it came face to face with a democratic government spending millions to hide a citizen from the sight of the Ayatollahs and the ummah, just because he had exercised his artistic and intellectual freedom by writing that book, exercising the prime core value of the West. The West watched its values — democracy, wealth, ideals, freedoms, academia, an entire intellectual galaxy — all rendered irrelevant by the unity of the Muslim mind, and the power of hate to defeat reason. It started with the Satanic Verses.

First, it was the drama of the British police guarding, hiding and moving Rushdie about as people associated with the book, employees or translators for the publisher started getting killed in free, democratic countries. Then Bangladeshi writer Taslima Nasreen was forced to go on the run in 1994 after a series of attacks on her — raging mobs of thousands demanding that she be hanged for a critical commentary on Islam.

Then, the Taliban blew up the 1,500-year-old Buddhas of Bamiyan for offending against Islam, banned music, radio and books and started whipping women in public.

Then, it was the cartoons published in the Danish paper Jyllands-Posten.

Now, academic and intellectual freedom in the West had been shut down.

A Somali Muslim, Ayan Hirsi Ali, was forced into hiding after Theo van Gogh was murdered by a Dutch-Moroccan Muslim for having produced her film Submission, about the treatment of women in Islam.

And then, there was the slaughter at Charlie Hebdo when 12 people were killed apparently for having caused offence against Islam.

From that evening with that Kashmiri boy and Salman Rushdie, 31 years ago, I have watched an Islamist assault on the values and freedoms of the West march on unstoppably.

And I become more and more certain that free speech is the greatest zenith of human civilisation — it has existed only now, it must be defended above all else because it is the only instrument human beings have against the authority and tyranny of orthodoxy, the clergy, the government. I have become clearer and clearer about where the threats were, and what the consequences would be of compromising and surrendering to these.

It's shaped my life, my values, my being. 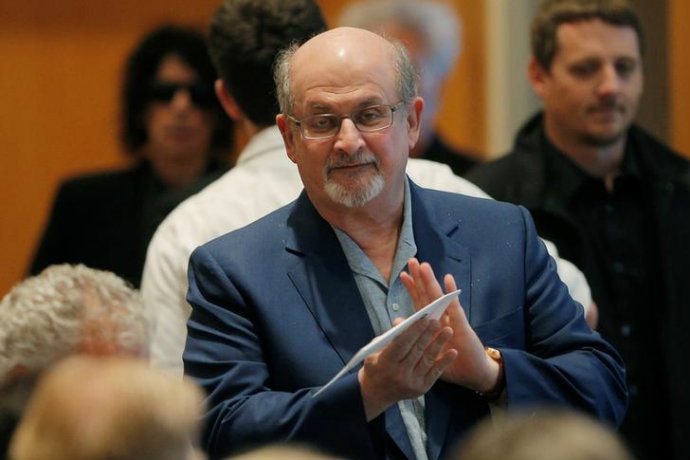 Who're you applauding, Mr Rushdie? We're going into a war over free speech. Which side are you on? (Photo: Reuters)

But now Salman Rushdie — who would be killed on sight in Kashmir — seems to think Indians are committing an atrocity if they expand the ambit of the democratic Constitution of India over a land where the takeover of the global jihad was almost complete. Because apparently, asking innocent civilians to put up with some inconvenience so that jihad cannot set fire to Kashmir is too much to ask.

Salman Rushdie, however, having started all this for us, has apparently decided that his conscience tells him Indians, or Hindus, wanting to address jihad are atrocious.

But now, Mr Rushdie at least can get closure and sit out the latest round of the clash of civilizations that started with him.

Post your comment
#Taslima Nasreen, #Satanic verses, #Free Speech, #Salman Rushdie
The views and opinions expressed in this article are those of the authors and do not necessarily reflect the official policy or position of DailyO.in or the India Today Group. The writers are solely responsible for any claims arising out of the contents of this article.