Truly International Yoga Day: Why, at 100 years, the world’s oldest yoga teacher carries on asanas in the USA

Tao Porchon-Lynch, who grew up in Puducherry and walked alongside Mahatma Gandhi as a child, is now the oldest yoga teacher in the world. She firmly believes yoga is the key to a happy long life.

Today, she lives in Hartsdale — a hamlet located in the town of Greenburgh, Westchester County, New York, United States. But Tao fell in love with yoga at age seven — in India.

In 1926, on a bright sunny day in Puducherry, she was going for a walk along the beach when she stopped, amazed at the sight of a group of local boys doing yoga.

Her aunt tried to move her along, saying, ‘These movements are not meant for girls’. But, to her aunt’s surprise, she responded, ‘Why? If boys can do it, so can I!’

A young Tao then and there decided to do what the boys on the beach were doing. "I followed their Yoga movements and I thought I was learning a new game. That evening, I told my aunt I really loved it and she repeated again that it was only for boys. I told her that girls can certainly do what boys can and by the time I was eight years old, I was on the beach daily, joining the boys practicing yoga during playtime,” she said.

Growing up at the Aurobindo Ashram in Puducherry, Tao, whose father was French and mother was from Manipur, was exposed to lessons from great yoga gurus and kept learning new skills, utterly immersed in the rhythmic calm and the strength yoga was imbuing in her. As a teenager, increasingly accomplished, she even taught yoga to people from around the world. Travelling to the West, she learnt from masters like BKS Iyengar and Maharishi Mahesh Yogi. She took to yoga full-time during the late 1960s and founded the Yoga Teachers Alliance which trained scores of yoga instructors abroad, helping to spread the great Indian art — an iconic symbol of our 'soft power' — abroad even in very early years.

Later, in the 1980s, she set up the Westchester Institute of Yoga in New York, where she continues to live and work even today.

“Yoga can be the joy of life and it's not just about putting our bodies into specific postures. It's about expressing what comes from inside of you and shows up when you meet other people to create a oneness,” she said.

In 2012, Tao Porchon-Lynch was recognised by the Guinness World Records as the 'world’s oldest yoga teacher'. She has also received the Padma Shri, India’s fourth highest civilian award, from the Consul General of India in New York, Sandeep Chakravorty, in January 2019, in recognition of her tremendous contribution to yoga.

At 100 Tao Porchon Lynch is a bundle of serenity, energy & joy. It was an honour to meet her & hand over the Padma Shri medal & citation to her. She started practicing Yoga in1926 & has twice marched with Gandhiji. She agreed to attend the International Day of Yoga celebrations. pic.twitter.com/fsHg3WVW8N

As Tao turned 100, she was unable to travel from America to India for the prize. But, as the consulate tweeted, the nation was honoured to conduct her award ceremony in the US itself.

For a person who is 100, Tao still practices yoga every single day — she says it is the best way to stay happy and to lose weight.

“The key to a long life is positive thinking. I don’t feel any different now that I’ve turned 100. I’m not even scared. And I’ll never stop practicing yoga. It's the dance of life. The breath is the breath eternal which makes all things possible,” she says. 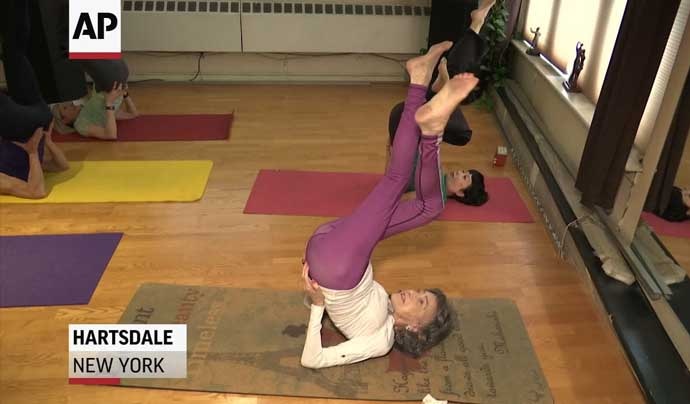 The art of yoga has helped her to shun all negativity from her life, keeping, as she says, her heart in true good health.

As she breathes calmly now and practices yet another asana, you can't help but wonder at that chance walk down a beach that led the world's oldest yoga teacher to this state of energised nirvana. As a child, she knew instinctively what her mind, body and soul needed.

Sticking with that child's wisdom has helped her achieve 100 years of an empowered, energised and wise life where this extraordinary Indian art and ancient life-lesson has helped her overcome challenges and spread the light of greater knowledge.

On International Yoga Day, we wish the amazing Tao Porchon-Lynch many more years of great yoga and enlightened asanas!

Also read: Do we have to now learn how to breathe?

Post your comment
#Guinness world records, #Padma shri recipient 2019, #Oldest yoga teacher, #Tao porchon-lynch
The views and opinions expressed in this article are those of the authors and do not necessarily reflect the official policy or position of DailyO.in or the India Today Group. The writers are solely responsible for any claims arising out of the contents of this article.