A taste of Tbilisi, where kindness is a way of life

After having a baby in India and moving back to Kuwait to finally commence life as a family of three, we decided that the three of us had earned a vacation and began to plan a five-day trip to Tbilisi — Georgia's capital city.

When the family learnt of this plan, we were bombarded with questions like, "Why Georgia of all places?" and "Why not go someplace more interesting?"

Despite admittedly not knowing much about Georgia — except some good reviews from friends who had recently visited — we decided to take the plunge and made bookings. Its proximity to Kuwait by air had also clinched the decision. Travelling too far with a baby was a no-go.

Between packing of diapers and other essential travel impedimenta, and being a victim to that immersive motherhood that comes with parenting a new baby without help, I had not had the time to wash my hair, let alone spend time on the internet researching Tbilisi. Relying on my limited knowledge of the country's Soviet past, I assured myself that half the charm would be in the discovery of the unknown.

Little did I know how understated would that thought prove to be.

We landed in Tbilisi to sublime, pleasant weather and clean, crisp air. Kuwait had been as hot as a sauna room in comparison. As our Uber approached and we braced ourselves — luggage, baby, stroller and all — but the cabbie emerged from his seat and tucked us all in before we knew it. We welcomed the refreshments that awaited us inside with open arms. 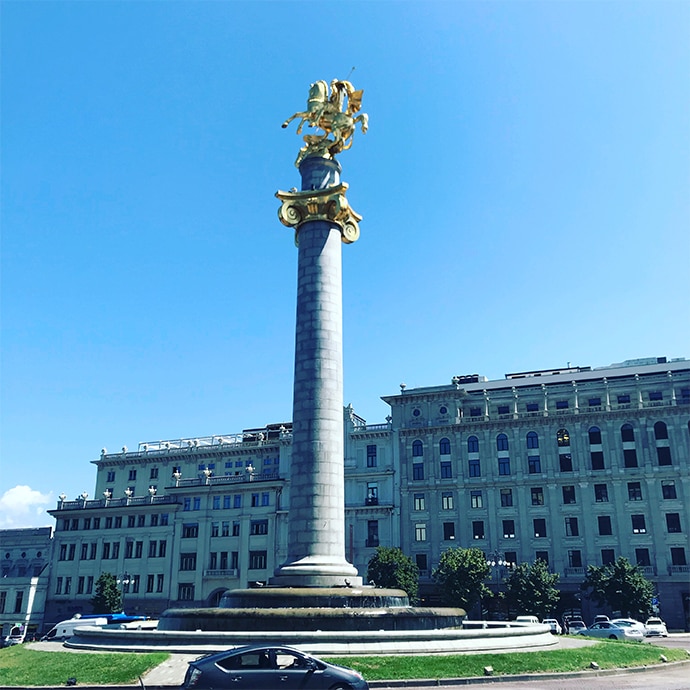 "Please," he offered with a glance in the rear-view mirror and a warm smile. "Welcome to Tbilisi." We returned his warm smile with thanks and exchanged happy ones with each other.

The car ride to our hotel in central Tbilisi revealed greenery ensconced in manicured parks and trees lining pavements of those familiar cobbled streets that were an old favourite of mine and dotted the banks of the Kura River along which the city was built.

The architecture was a rich and intriguing mixture of medieval, neo-classical, Stalinist and modern-era structures — a telling depiction of its diverse history. One is overcome with a strong sense of déjà vu of many other cities in the world, while walking through the streets of Tbilisi. There was Moscow with its widening roads as you approached its main thoroughfare flanked with Soviet-styled parks and shops lining the streets. There was St Petersburg, its other estranged cousin after the breakup of the Soviet Union, in its greenery and European style buildings. Then there was a bit of Zürich as we crossed the Bridge of Peace that overlooked the Kura River and as we took the right turn towards the elevated city centre with its cobbled streets leading through graduated galis lined with pubs, bars and cafés a strong whiff of quaint towns in France like Nice came to mind.

As we sat in a café overlooking the river and the sunset overhead, we reflected on a bit of history.

This was the Old Town of Tbilisi, which was reconstructed during the 1970s and 1980s. This was also home to the famous towering Freedom Square, where numerous anti-Russian demonstrations occurred and it acquired its name on the occasion of its liberation from the Russian empire in 1991 after the collapse of the Soviet Union. Owing to the tug of war for Georgia that ensued over centuries before that between the Persians, Turks and Russians, a significant influence of these countries — and more recently Arabic influences — can be seen in their food, culture, language and even goods being sold in the local shops.

Interestingly, Freedom Square is also where, in 2005, a grenade was thrown at President George W Bush who was addressing a crowd of 1,00,000 people at the 60th anniversary of the end of the Second World War, in an unsuccessful attempt to assassinate him.

The diversity of culture in Tbilisi shines through like a brooch of pride as if to say, "Wherever you are from, you are welcome here." This vibe was mirrored in the disposition of the locals as well.

With a baby and a stroller in tow in a city that has staircases and ramps every few hundred yards, we had some physical labour cut out for us. But it was another testament to the kindness and hospitality of the people of Georgia that each time I bent down to help my husband with the stroller, a bunch of four or five gentleman would rush and do the needful. No questions asked. Only our surprised and profuse “thank yous” that were met with warm smiles and "enjoy your day" greetings. This continued throughout the trip. Once it was a pair of local policemen who each grabbed one leg of the stroller and ran up the stairs with smiles for the baby. View of Kura River and the graduated city around from a café. (Photo: Shaira Mohan)

It was clear by now that being unable to speak the same language was hardly an impediment to kindness because after all, actions spoke louder than words. The Georgians were a relaxed and unconditionally friendly bunch who had won our hearts and we knew we would be returning for seconds.

As we climbed into a taxi once again to commence the trek back to the airport, we rode in silent contentment of the last few days. Our taxi driver asked us if we wanted to hear some Bollywood music. We said no, thank you. What transpired next, undeniably, was the icing on our Georgian adventure. "Jan Gan Man" began to play in the music system of the car!

As our eyes shot upwards in disbelief and met his own in the rear-view mirror, he smiled and said, "Do come again soon."

Also: Indian woman's angry FB post on how she was harassed at Georgia airport