Tibetan Uprising: Where is the Buddha?

"With the end of the debate on Tibet in the United Nations, Tibetans lost all hopes of their survival, stare at the sky with the blank eyes and ask: where is God, where is the Buddha?”

In March 1959, as the Roof of the World had just entered the Earth/Boar Year, Lhasa saw the suppression of the Tibetan Uprising, perhaps the most tragic event of the 1950s. A full cycle in the Tibetan calendar later, it is worth remembering the momentous popular revolt witnessed by few outsiders.One of those who saw the historic event at close quarters was RS Kapur, the Indian Trade Agent in Gyantse, South of Lhasa. In his annual report to the Ministry of External Affairs, the official wrote, “1959 will go down as the most important year in the history of Tibet. It marked an end to the way of life of the Tibetan people. The Dalai Lama, who felt that he could no longer function effectively, left his country with his Cabinet in March and took asylum in India.”

Kapur continued his description of the events in Tibet during the Boar Year. “With opposition out of the country, Chinese got a free hand and they went all out to subjugate the country. People have been deprived of their movable and immovable property; stock of grains in possession of the ‘landlords’, middle-class people and the monasteries have been taken over. The end of the year left the Tibetans entirely at the mercy of the Chinese.” Kapur’s conclusions were, “While the heart of Tibet was bleeding, the free world only made speeches. With the end of the debate on Tibet in the United Nations, Tibetans lost all hopes of their survival, stare at the sky with the blank eyes and ask: where is God, where is the Buddha?” Apart from Kapur’s narrative, an even-closer observer’s report was written by the Indian Consul General in Lhasa, Major SL Chhibber, for his bosses in Delhi. The Dalai Lama in his memoirs and Jianglin Li in her Tibet in Agony have given other accounts, the latter from Chinese sources.

60 years later, reading all these descriptions, one is struck by the fact that the March 10 ‘Uprising’ (as is known by the Tibetans), was primarily a popular movement like Bastille Day in 1789 in France; it was a spontaneous movement originating in the resentment of the ‘masses’ against Chinese occupation. 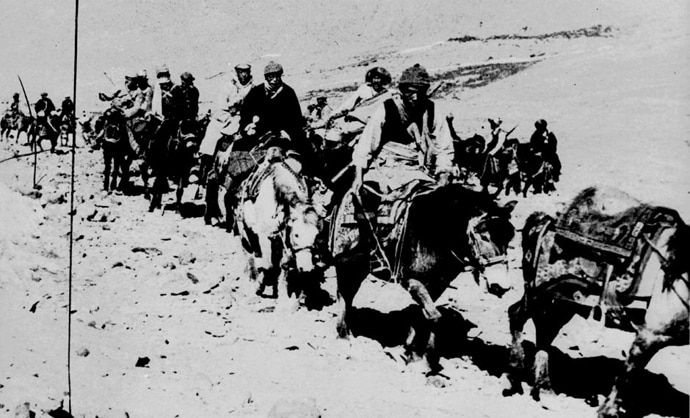 The 23-year-old Dalai Lama and his escape party is shown on the fourth day of their flight to freedom as they cross the Zsagola pass, in Southern Tibet, while being pursued by Chinese military forces, on March 21, 1959, after fleeing Lhasa. (Photo: Associated Press)

In his report, Major Chhibber observed, “The month of March 1959, will be most historic, as during this month Tibetans high and low, and in Lhasa openly challenged the Chinese rule in Tibet. They set up an organisation called Pho Mimang Ranchen Chi Chog, meaning, ‘Tibetan Peoples Independent Organisation’ — [they] renounced the Sino-Tibetan Agreement of 1951, staged demonstrations to give vent to their anti-Chinese feelings and demanded the withdrawal of the Chinese from Tibet.”

It ended in a bloodbath: “An all-out offensive against the ill-organised, ill-equipped, untrained-Tibetans with artillery, mortars, machine guns and all types of automatic weapons, was short-lived,” reported the Consul, who experienced ‘lost’ bullets flying close to him in the Indian Consulate located near the Summer Palace. The Dalai Lama had no choice but to flee Lhasa and finally take refuge in India — he crossed the Indian border, North of Tawang on March 31 where he was received by Indian officials who gave him a letter from Prime Minister Nehru, welcoming him to India. India’s generous gesture would eventually trigger the first Chinese attacks on Indian Territory in the NEFA in August 1959 (in Longju, today’s Upper Subansiri district) and Kongkala in Ladakh in October. An Indian official greets the Dalai Lama on the latter’s arrival at a military camp on the frontier of Assam April 18, 1959, in India. (Photo: Associated Press)

Jianglin Li, in her paper ‘Suppressing Rebellion in Tibet and the China-India Border War’, brings another perspective and a plausible theory — in ‘suppressing’ the Tibetan resistance, the People’s Liberation Army (PLA) practised for a more important battle… against India.

Li writes, “From March 25 to April 5, the CCP Central Committee held an enlarged Politburo meeting and the seventh plenary session of the Eighth Central Committee in Shanghai. ‘Pacification’ of rebellion in Tibet and relations with India were two of the issues discussed.” Mao, probably upset by the grand reception given to the Dalai Lama in India, would have stated, “Let the Indian government commit all the wrongs for now. When the time comes, we will settle accounts with them.” 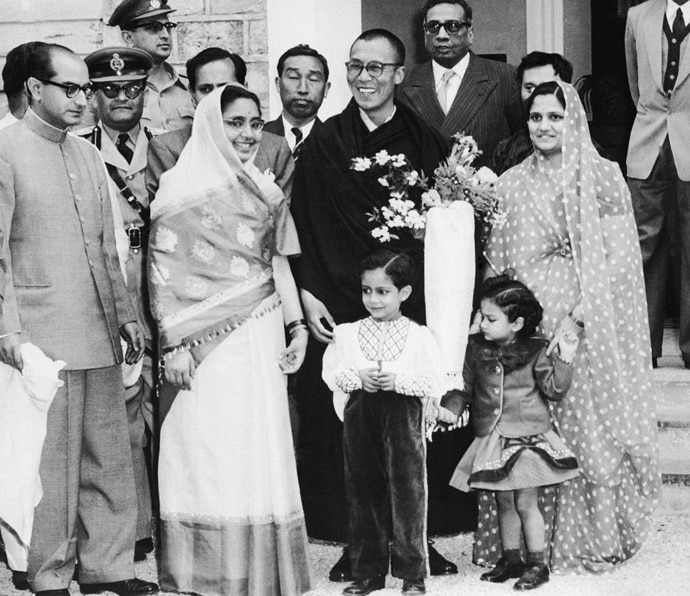 The Dalai Lama of Tibet poses with his hosts, the wealthy Indian Birla brothers and their families April 28, 1959, at Birla house, Mussoorie, India. (Photo: Associated Press)

After studying “Various statistics, including participating PLA military commands, branches involved, numbers of combat forces and logistical support units, amount of supplies,” Li discovered that the PLA’s action against the Tibetan rebellion was only a ‘training’ to take on India at a later stage.

According to Li, Mao Zedong gave written instructions for Tibet four times. Mao pointed out the ‘rebellion is a good thing’ as it could be used to ‘train the troops and masses’ and to ‘harden our troops to combat readiness’: “All these instructions show that even before the March 10 uprising, Mao had the idea of using ‘suppressing rebellion’ to train PLA troops,” comments Li.

She found proof that by mid-February 1959, “Everyone from the defence minister all the way down to the regimental commanders of combat troops understood Mao’s intention to use the opportunity of suppressing Tibetan resistance as a training exercise.” Li discovered, “The 12 large scale battles fought in central Tibet from March 1959 to early 1962 were in fact conducted as a thoroughly organised military training, beyond the requirements of a counter-insurgency operation.”

Adaptation to high-altitude warfare, logistics, intelligence, transportation safety on Qinghai-Tibet Highway, were all ‘tested’, in case. Against an unprepared, Indian Army, the ‘training’ paid off in October-November 1962.

Incidentally, last month, Xinhua reported that some two million personnel were involved in more than 18,000, small-scale exercises in 2018 in China. Impressive figures!

#Chinese red army, #China-tibet conflict, #Dalai Lama, #Tibetan Uprising Day
The views and opinions expressed in this article are those of the authors and do not necessarily reflect the official policy or position of DailyO.in or the India Today Group. The writers are solely responsible for any claims arising out of the contents of this article.