How a visit to Goa left me enthralled

Hindu temples sat cheek-by-jowl with churches, both lit up in psychedelic displays of light.

"Dekho (look)!" my boatman was saying in Hindi. Turning my head to the left, there peeked amongst the verdant green of the mangrove, the distinctively white-washed steeple of a church. Approaching the church on a canoe.

Priyamanan whose name means "forever love" in Hindi, said something else to me in Hindi, the import of which, I gathered, was that we should go and have a closer look. "Yes!" I said, exultant. I was in Goa.

Approaching the church on a kayak, we steered past a clump of thick mangrove trees, aerial roots exposed in the dark brown swirl of the river. I could hear a clergyman in clipped tones, his voice rising and falling as he imparted liturgy to his flock, a hushed silence falling over the jungle.

As we drew closer, I could discern that he was holding forth in English. We lingered there while I clicked a few pictures: Priyamanan holding the oars in abeyance, in reverence almost, until the photos were taken. It was as if he understood the tao of photography: the stillness and unobstrusiveness that is sometimes required.

That despite the very nature of photography - the inclusion and/or exclusion of objects in a picture frame being dictated by the photographer himself. A certain level of discipline must, nevertheless, be cultivated: moments of quiet contemplation necessary to be able to convey the subject matter in the manner most befitting.

We steered away, the oars dipping soothingly, rhythmically, into the water as the boat sliced into the river. I surveyed the trees around me. Above, white-headed Brahminy kites swooped, their churlish calls of "Ee-nyek, ee-nyek!" echoing in the air. A lone kingfisher, startling blue plumes, sat aloof on a tree branch. My eyes fell on a discarded fruit of the pong pong tree, its floating husk of a carcass barely recognisable in the brackish water. 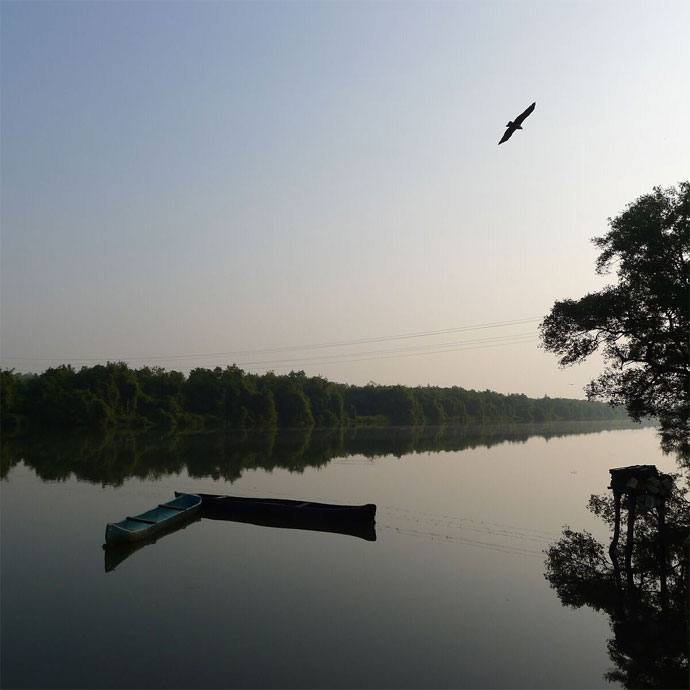 A Brahminy kite above the river.

Later that morning, my Dutch girlfriend, Tara, and I found ourselves in Anita's home. A native Goan, teaching gender studies at St Xavier's College, named after the Catholic saint who was buried in Goa in 1553, she was bubbly and effusive.

Tara and I were taking a walk through the village, Moira, where Tara resided. She wanted to show me the windows typical of traditional Goan architecture - Annie's was the perfect example. She happened to be gardening and invited us in with alacrity.

As Tara and she exchanged pleasantries, I took close-ups of the mother-of-pearl adorning Annie's windows, laid simply in vertical lines. Called "nacre" and sourced from conch shells, the mother-of-pearl lets in light and was extensively used in the past instead of glass. Annie's husband, Alan, joined us in the drawing room, still festooned with Christmas decorations, red poinsettia galore. Quick introductions were made. Tara pointed out to me the old jars used to store toddy and home-made vinegar in the past.

Annie served us guava "cheese", a sweet made from the pulp of guava and cooked slowly with sugar and ghee, as well as her Christmas cake and beetroot toffee. They were all delicious. Her recipe for a Goan-style pancake called Rosache Podde, made of brown rice and jaggery, was featured in the book The Culinary Heritage of Goa. I thumbed through it until I located her smiling countenance, Anita excitedly pointing out the photographs that were taken of her antique silverware and crockery. 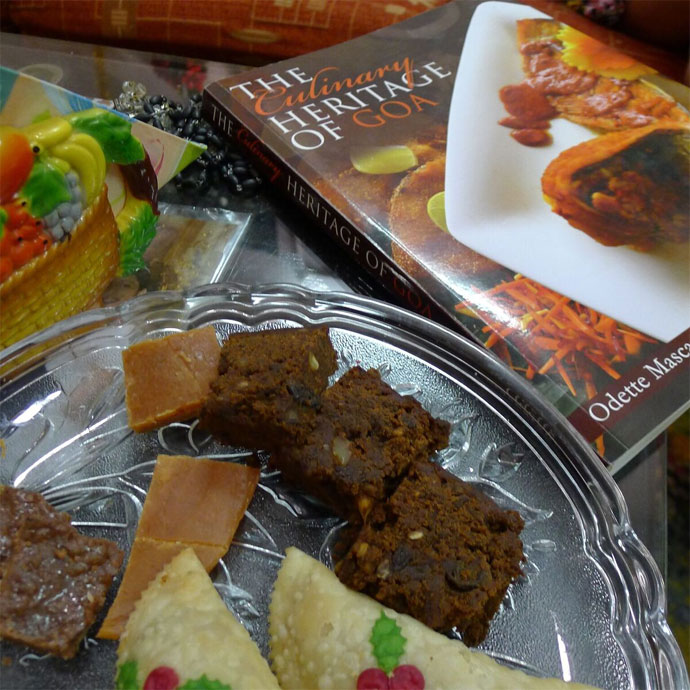 I asked Anita about the church that I saw this morning, describing its location since Goa was scattered with many such beautiful edifices. "Oh, that's the Mary Immaculate Church!" she beamed. "It's 375-years-old!" Tara chipped in. "Aren't the services normally in Konkani (the local language)?" I asked.

"Yes, but today is the first holy communion. A pair of twins are being baptised today!" Bidding farewell to the couple and their bushy white cat, Flaky, sitting sourly at Alan's feet, Tara and I continued our walk. Approaching the church on foot this time, we first came across the crypt, stark white against the powder blue sky. We entered the church, empty now. 63-years-old, Tara was brought up as a Catholic, a minority in her native country.

She sat down on a pew whilst I took pictures, moving quietly, first photographing the intricate tile work lining the lower walls of the church. It was a fascinating mix of various hues of green, interspersed with delicate pink roses, reminiscent of the colourful porcelain found in the Peranakan (Straits Malaccan Chinese who adopted certain aspects of Malay culture, including dressing and speaking in Malay) culture. I then photographed the pews and furniture which appeared to be similar to the period furniture - from the 1920s - in Anita's home. 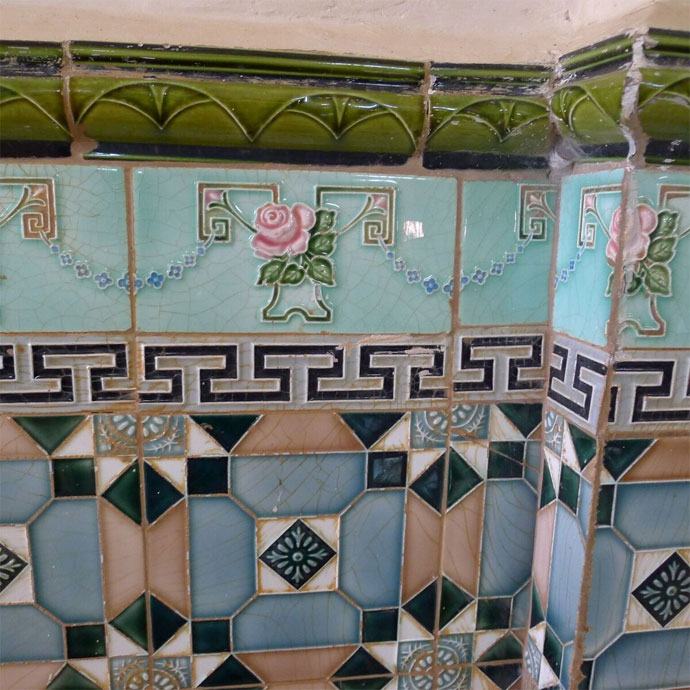 A tiny baby, swaddled in white, was brought in by a local family and met by the priest, dressed in his finery. Tara and I silently took our leave after witnessing the initial proceedings. Goa reminded me of Mallorca island where I spent Christmas in 2010. Concrete manifestations of the Catholic faith: roadside shrines dedicated to the Virgin Mary. In Goa, Hindu temples sat cheek-by-jowl with churches, both lit up in psychedelic displays of light.

While the former were festooned with multi-coloured fairy lights to celebrate a festival, the latter had a profusion of colours projected onto their ivory, wedding-cake-like façades. I've always had a certain fascination with Catholic churches - the beauty of its altar pieces juxtaposed against the sombre and severe depictions of Jesus' final hours. 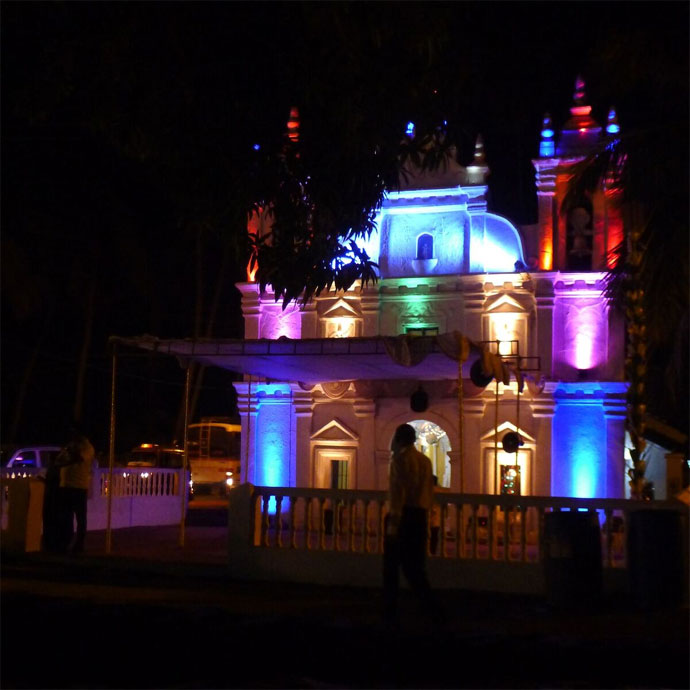 Tara, with her childlike enthusiasm, took great pleasure in explaining Hinduism in its myriad aspects to me. But I am a poor student. "So is this the same story as the one where Sati was cut into pieces by Vishnu and her yoni (female organ from the Hindi) fell onto the hills in Assam where the Kamakhya temple is now built?" I asked, confused.

"Nooo, nooo, that is another story," Tara said, with the patience of a saint. "The one I'm telling you now predates the Mahabharata." Tara, being a painter and having resided in India for a good 45 years, has read up extensively on the Hindu gods. On our way to lunch today, Tara spent a good part of it in the car reading out to me sections of an interpretation in English of the Bhagavad Gita from her iPad, taking care to explain the debate between Krishna and Arjuna on the battlefield.

I don't think I can do justice to any aspects of the text right now, tired as I am after returning to Delhi. However, Arjuna's angst of having to kill his kin, calls to mind the following quote from the author Paul Coelho: "When we least expect it, life sets us a challenge to test our courage and willingness to change; at such a moment, there is no point in pretending that nothing has happened or in saying that we are not yet ready. The challenge will not wait. Life will not look back."

Post your comment
#Christmas, #Goa, #Travel
The views and opinions expressed in this article are those of the authors and do not necessarily reflect the official policy or position of DailyO.in or the India Today Group. The writers are solely responsible for any claims arising out of the contents of this article.