Virushka reception: Kangana to Katrina, Rekha to Rao Hydari, who won hearts and who didn't

To set the record straight, I'm as big a fan of weddings as the next girl. It's nauseatingly delightful to see the loved-up couple beaming at each other, their friends flooding social media with a customised hashtag, and singles wallowing in self-pity over their unmarried fate. It's truly charming.

#Virushka’s wedding (Virat + Anushka = do the math) was no different, except that the ‘friends’ in question were your next-door mega celebrities. At the recent reception held at St Regis, Mumbai, on December 26, every star worth their Bollywood salt was in attendance, dressed to the nines in elaborate designer wedding wear.

In such cases, it becomes our moral obligation to observe, critique, and dissect who wore what – especially since we were not invited to the event ourselves. And tbh, why not?

Anushka has been fitted in Sabysachi ensembles since the beginning of her wedding sensation that took off in Italy on December 11. She certainly looked stunning in most of the designer looks – the bridal and Mumbai reception lehengas were especially memorable. 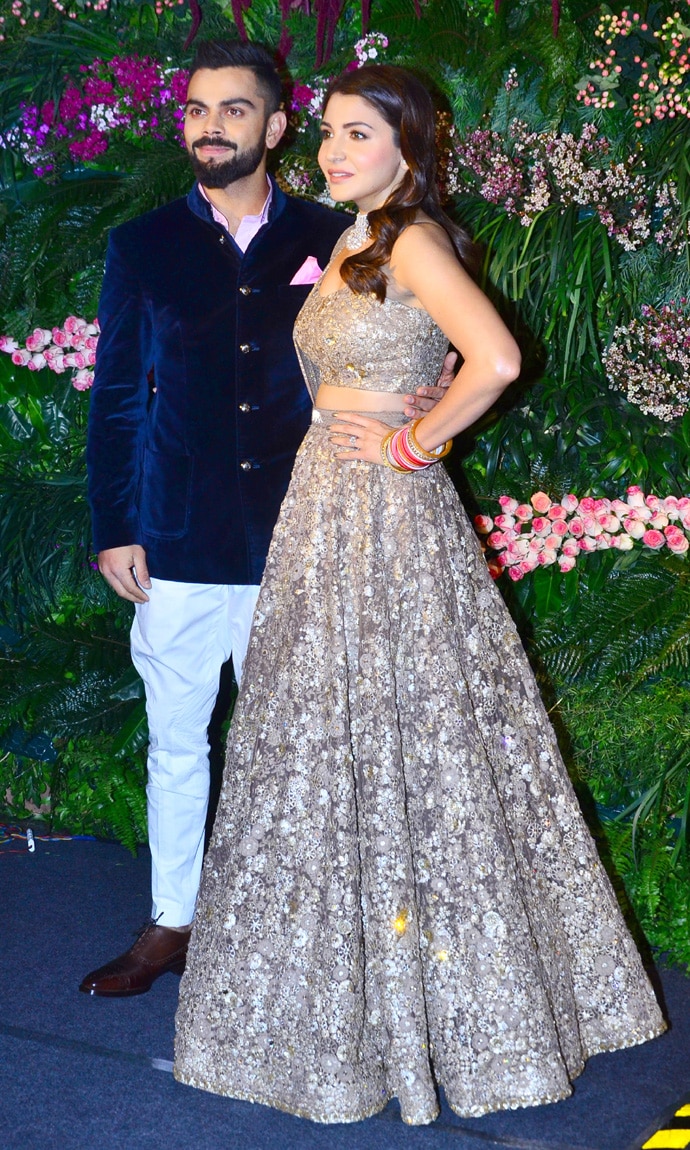 Though she looked lovely, Anushka's style chart is just short of resembling a brand campaign for Sabyasachi Mukherjee.Photo: Yogen Shah

However, we're left wondering as to why the actress has been opting for the same designer for each function. Anushka has been radiant as ever at each do, but we can't help but reflect on how her style chart is just short of resembling a brand campaign for Sabya.

While we appreciate her loyalty to the label, the sheer repetition of it is close to overshadowing the personal touch of the wedding.

Gone are Priyanka Chopra's days of wearing sexy, see-through saris that showed off her enviable figure. As the powerhouse she is today, PC's style strategy has been advancing towards establishing herself as the doyenne of Bollywood – and dare we say, she's following in the footsteps of (did someone say taking on?) the diva, Rekha, herself! 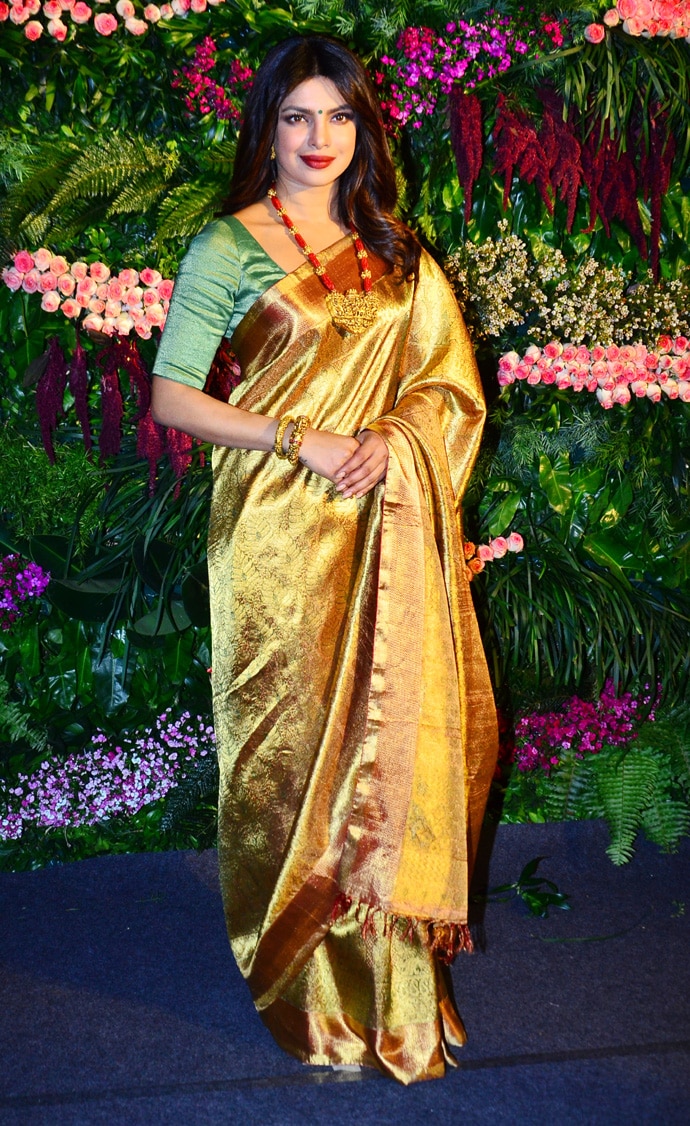 So Piggy Chops wore a gold benarasi sari from her private collection, teamed with an elbow-length green blouse, a traditional statement necklace, a bold red pout and a round green bindi.

Rekha wore a gold and rose kanjeevaram sari from her private collection, teamed with an elbow-length pink blouse, layers of traditional choker necklaces, a bold red pout and a little round bindi.

Now we don't want to comment on who looked better, given the vast age gap between the two, but we can't help but notice the recurring similarities between their looks. Either way, weavers across the country must be rejoicing.

It's not her fault – Katrina Kaif can't help repeating the Disney-princess-meets-beauty-pageant-winner style almost every time she steps out for a major public appearance. This time was evidently no different, as she wore a Manish Malhotra ensemble that featured a high-waisted fishtail skirt with a trail that belonged to 2015. Gorgeous blouse, but a skirt with a trail that belonged to 2015. Photo: Yogen Shah

However, in contrast, the blouse was strikingly beautiful. Her skin looked lovely and her hair fell well in a soft centre-parting. If only that skirt was something different…

Aditi Rao Hydari was a sight for sore eyes in her brocade lehenga option by Manish Malhotra. The movement of colour on the skirt was refreshingly eye-catching, and the off-shoulder blouse boasted an interesting element of patterned sleeves.

A chunky kundan choker necklace was all the embellishment she wore to complete her look, and the simplicity of it set her apart from the din of gaudy dressers. The movement of colour on the skirt was refreshingly eye-catching, and the off-shoulder blouse had an interesting element of patterned sleeves. Photo: Yogen Shah

While some have commented on the strangeness of her make-up, we feel that she deserves marks for wearing the pink-toned eye shadow and lipstick to a wedding scene. Someone's got to shake things up, after all!

Kangana Ranaut's style is usually impeccable, so we were a bit disappointed to see her Sabyasachi sari look go to waste because of its drape. Not only was it not well put-together, but the blouse gathered on her arms in a shapeless way. 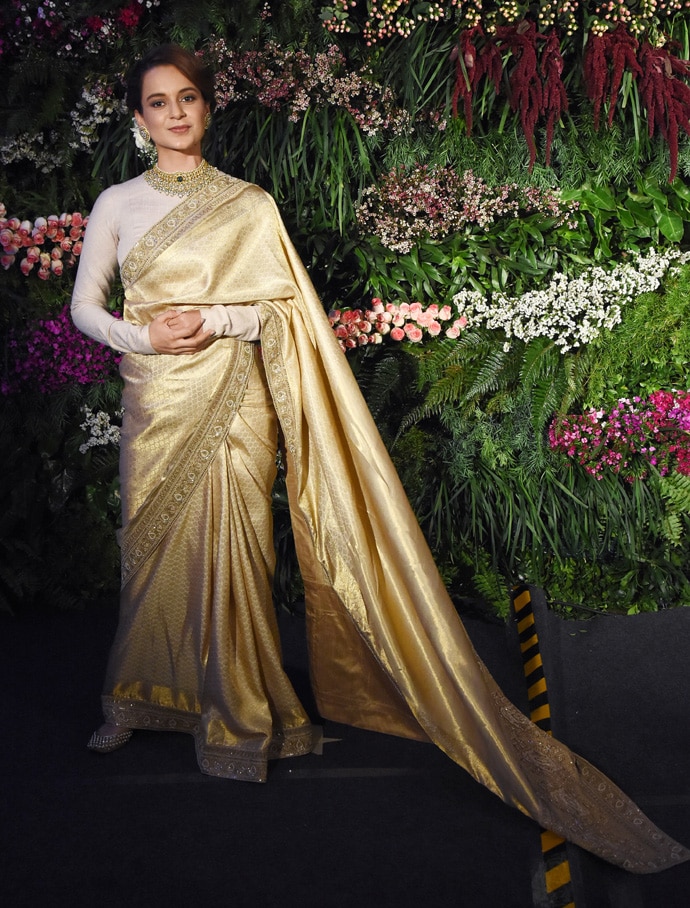 The drape, and the blouse gathered at the arms disappoint. Photo: Yogen Shah

Of course, the choice of necklace was gorgeous – a gold and polki choker necklace with a chunky emerald in the centre (again by Sabya) – and her hair-bun with white roses was vintage perfection. Since Kangana is far from being a repeat-offender, we'll let this one pass.

Post your comment
#Sabyasachi Mukherjee, #Fashion, #Virushka reception
The views and opinions expressed in this article are those of the authors and do not necessarily reflect the official policy or position of DailyO.in or the India Today Group. The writers are solely responsible for any claims arising out of the contents of this article.