What is Dubai Porta Potty?

Content warning: This story is about a disgusting trend you may have heard about. Please don't go ahead if mentions of depravity and lows human beings can stoop to can scar you.

Instagram is a wonderland. And it's complicated. People go to extraordinary lengths to find an Instagrammable life. For some, it's a length so far that it can scar one for life and cause severe mental health issues. If you are watching Dubai Bling on Netflix, finish that before reading this because this will have an impact on how you see that series.

Ok, we warned you. Now getting to the point.

Picture this. You’re on a Kardashian-level vacation to Dubai, buying whatever you can, and availing free hotel stays. But everything comes at a price. And the price for this experience is ~pooping~ on a rich man (or letting him do it on your face in some cases).

found out what a dubai porta potty is and its DISGUSTING

This is how the shockingly disgusting trend of Dubai Porta Potty can be described. The rich men of the Emirates have a lot of money to spend and evidently a lot of unconventional fetishes to explore. One of them involves paying a round trip for influencers from abroad to fly to their mansions and get dirty with them (quite literally). In return, they also get paid anywhere between $25,000 and $50,000.

But how do we know this? Rumours around this trend had been circulating for quite some time but the news has been blowing up on TikTok and Twitter since May, for both informative and satirical reasons. One of the earliest accounts came from Laims (surname unknown), a 31-year-old flight attendant-turned-TikTok star.

Her TikTok account @hocusbogus2.0, which currently boasts 189.7k followers, went viral in May, when she uploaded a video on her account reaffirming the rumours. She added that during her time as a flight attendant, a friend at work remarked how one of the first-class passengers was constantly asking for fibre-rich foods, gobbling down oatmeal and Greek yogurt.

This naturally led Laims to be curious about the woman’s obsession with a fibre diet. Eventually, when she couldn’t hold back, Laims finally asked the passenger, and then realised the passenger too wasn't able to hold back. She had to tell someone:

“Honestly babes. I get paid to sh*t on Emirati men, and I’ve got to eat all my fibre ’cause I’m going on a boat tonight.”

Surprisingly, @hocusbogus2.0 added in her TikTok videos that such occurrences are common among the elites of Dubai, with even some flight attendants getting involved at times, being asked to do it on either the chest (or let's just leave it here) of businessmen.

More influencers come forward with their accounts: After Laims’s revelations, the news began spreading on social media. Around the same time, TikTok user @chennifar procured a video of an unnamed 26-year-old woman who read out a contract she received from a Dubai-based rich man claiming to be a certain Sultan Ali. She said that she would be paid $25,000 in advance and the same amount again when the job was done. What does this job entail?

While there are no mentions of any literally-dirty activities, the post was being shared around to discuss how disgusting and quite eccentric Dubai princes can be. Despite all the negative reactions the TikTok generated, it is worth noting that the 26-year-old in question ended the video by saying, “Thank you, Mr Ali. I can’t wait to see you.”

In June, another TikTok star Saint Mullan explained her experience with a man who asked her to join him for a yacht party in Dubai. The London-based influencer and personal trainer received this invite as a private Instagram text from a man claiming to be a Dubai prince’s friend.

Mullan shared the screenshots on TikTok, claiming to spread awareness around the disgusting things that such men can ask in the name of being “sugardaddies” or “patrons”.

A particularly disgusting video also got uploaded on TikTok and Twitter (now removed) around this time that depicted a woman quite literally dropping in the mouth of a man, alleged to be a snippet from a Dubai millionaire’s party. Needless to say, we wouldn’t embed the video here (which can still be found on the dark corners of the Internet but do not look for it, we warn you).

Do the Dubai men have a racial demographic in mind? It is concerning that most of the women who have come out with their accounts as well as the women seen in the graphic videos seem to be of African descent. Even the British women who were asked to be a part of such kinks (such as Saint Mullan) are black.

If the Porta Potty trend wasn’t disturbing enough, an apparent racial targeting of the chosen women only adds further concerns. Back in May, Nigerian magazine City People also reported on how women from the city of Lagos (referring to them as “Lagos Big Babes”!) were actively involved in the trend. However, there are exceptions too like the aforementioned 26-year-old, so it cannot be said for certain if the Dubai men are just interested in black women.

Criticism from a Dubai influencer: While the rest of the world is shocked or even amused, a large share of social media users also feel it’s better to ignore it all as ultimately, it is a kinky act between consenting individuals.

Arab content creator and a self-proclaimed “financially-built man” Ebrahim (@Ebrahim_ka on TikTok) took to social media to express his disgust and how damaging it can be for Dubai’s men.

“All rich men in Dubai fly girls out to do this. They are disgusting. All of them have the same fetish. What shocks me the most is that people of Dubai are not keeping up with these trending videos, and they never heard of such a thing.”

However, before anyone could point fingers at him, Ebrahim was also quick to remark, “I for one do not enjoy defecating on other people’s faces!”

While no criminal investigation has been lodged in UAE, such Porta Potty events continue to be held as most of them are obviously underground parties. It is highly likely that the influencers involved have to sign non-disclosure agreements to engage in such acts. 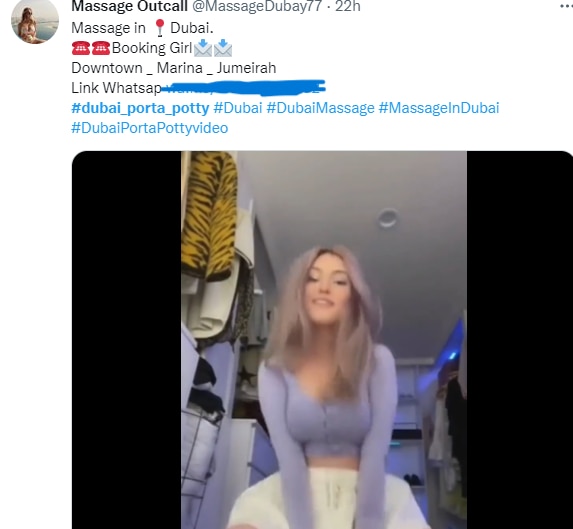 Rumours on social media and YouTube conspiracy videos continue to suggest that the women might also get paid for also engaging in other ghastly and illegal acts like beastiality and paedophilia. For instance, if the woman in the TikTok video shared by @chennifar was indeed telling the truth, then her contract required her to engage in non-mentionable activities with a camel!

the dahmer documentary scares tf out of me cuz he was getting away with that and he was broke so then I got to thinking like wait what do the rich people be doing… today? cuz we already found out they got a human toilet world im scared of life sometimes

To our readers, we did the research and told you what was safe to say. We didn't need to know this but we know now. So, do not go looking. Be warned of the sheer vomit-inducing content that you will find down this dark rabbit hole.