I grew up a late 70s child. I was obese and buck-toothed and lied compulsively about an absentee father whose sepia-stained portrait hung in a damp mezzanine floor puja room, together with rows and rows of buxom goddesses and venerable, bare-bodied male gods who balanced mighty bows and arrows on their broad-shouldered backs, whose kohl-lined eyes brimmed with a million inexplicable secrets.

I knew nothing about love — any sort of man-woman love, quite honestly. The only male figure around my growing up being my septuagenarian, grouchy grandfather and his faithful Oriya Man Friday, Kalipada mama. There was no cross reference to physical intimacy. My grandparents, who themselves had an inter-caste love marriage, bickered more than touched, by the time I was born. It was a successful marriage, or, by the standards of a middle-class Bengali household, normal.

I first heard of 'Valentine's Day' when Shilpi Chopra, a sprightly girl in my class, in Loreto House, my alma mater in the city of my birth, Kolkata, brought us a bunch of colorful greeting cards from a sprawling shop her family owned in Gariahaat, a bustling shopper's paradise in the southern part of our hometown, infested with dimly lit hawker stalls, selling just about everything, from women's lace lingerie to fake plastic flowers to cheap replicas of British crockery, dinner sets and tea cups.

Almost everyone in class seven had a boyfriend — a special someone — a man who wanted them. Who was attracted to their physicality. Their smile. Their hairstyle. The sound of their laughter. 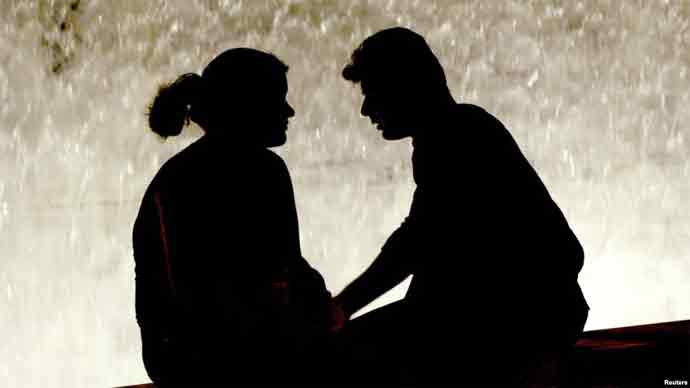 Surjodeep, the object of my adolescent affection, just covered his face with shame when I uttered the three words, 'I love you.' (Photo: Reuters)

I, on the other hand, had just been colossally rejected on Saraswati Puja — the regional equivalent of Valentine's Day — when post-pubescent young boys and girls walked hand in hand on Dhakuria Bridge or sneaked out to sip on a bottle of Campa Cola, or stole a kiss as dusk shrouded the city, sitting on a stone bench, facing a ghoulish green lake, surrounded by shanties, as women sans brasseries washed a pile of discolored lungis and crumpled cotton saris, chattering amongst themselves.

Surjodeep, the object of my adolescent affection, had just covered his face with shame and agony, when, on the eve of the spring festival, I had uttered the three words, 'I love you.' Which looking back, I ascribe to a certain mushy Bollywood cult film that had released that same year. It was called Maine Pyaar Kiya.

Starring Salman Khan who rode a bicycle, and wore a leather jacket and a slanted cap, crooning love songs on an open terrace under the stars and planting a lip kiss on a glass door, separated from the woman of his dreams, as I felt, when Surjodeep, who had studied with me in a Montessori school, and who also grew up minus his father, in the sanguine shadow of his maternal grandparents, looked ashen when I asked my nanny to close the wooden teak door to my study behind her. I ascribe my teen love to a certain mushy Bollywood cult film that released that same year — it was called Maine Pyaar Kiya. (Photo: Screengrab)

Getting up, just once, to switch off the tape that had been playing since morning. A song called Careless Whisper. Immortalised by a band called Wham. Helmed by a blonde singer whose life-size poster hung beside another teen heartthrob, Boris Becker.

Surjodeep was a batsman, or something...

"I love you," I remember repeating, clearing my voice.

Before never turning back.

Acknowledging what I felt. What I had felt the first time I wept in his arms, talking about my dead father. As he caressed my hair. His own eyes, damp.

His father had gone away, too...

I thought we were equal.

"He ghosted you…it's no big deal," one of my girlfriends dismissively shrugged her shoulders, smoking all the while. Her eyes looking mean, all of a sudden. Her caffeine-infused breath caressing the corners of my mouth.

I tried saying something.

"Dude," she stubbed out her cigarette, adding as I sipped on my latte, in contemplative silence, "It's Tinder…find, f**k, forget, is the new normal. And this guy…I mean, I understand you were into him…but he didn't even f**k you…so quit the moping around…and get down to swiping again…the more the merrier…try, try, try again…angrezi mein kahawat hain…suna toh hoga..." "Dude," she stubbed out her cigarette, adding as I sipped on my latte, "It's Tinder…find, f**k, forget, is the new normal." (Photo: Wikimedia Commons)

I studied my face in the transparent glass door that I faced.

"What was that this fellow called you?" my friend coughed, ordering us a pepperoni pizza.

Evening traffic had begun gathering momentum. The lane in front of our café now was infested with rows and rows of automobiles.

The incessant honking made it difficult to hear.

"We never ordered this…," my thoughts were brusquely interrupted by my friend picking an argument with a steward.

The man bowed his head.

"So, are we looking like a couple, huh?" she made a face.

I closed my eyes.

The way he never answered.

"No, Madam…this is our new policy…a complimentary, free pizza for women friends…," the man had just started.

"Exactly…our café is called Juliet…so this one's for all the Juliets out there...waiting...," his voice trailed off.

It's how I celebrated Valentine's Day last year.

Logging out from Tinder, an online dating app, where my heart was broken.

For doing what I always have.

The way I grew up, wanting to feel love and love to feel.

Still searching, perhaps for that love. Perhaps for Surjodeep's answer.