Zaira Wasim, as a young professional, why bring religion into your work? Is that what you want to teach your fans?

Bollywood actor Zaira Wasim says she will leave the acting world owing to her faith. But why bring faith into a professional choice?

Okay, Zaira, the decision to come into the film industry was totally yours — as a 15-year-old, meeting megastar Aamir Khan, acting with him in a movie, walking the red carpet, were part of a fairytale scenario you must have dreamt of. Everything was going as you could have imagined — Dangal (2016), Secret Superstar (2018) and the to-be-released The Sky Is Pink — three movies in a short span is not bad at all.

What got you thinking that your work interfered with your religion?

I am a Christian — as a journalist, I have been to mosques, temples and gurudwaras. I have covered several religious events. I have met people of diverse faiths and heard their concerns. I have dealt with artefacts considered sacred by some, evidence considered foul by others.

My work requires me to do all this and I will do it.

Personally, I feel all the richer for it.

In June 2005, a group of Pakistani qawwals had come to Nizamuddin Dargah in Delhi. I had gone there to report on them. But my work interaction only added to my knowledge. As I entered the bylanes of the dargah, there were poor people galore, sitting next to restaurants, waiting to be fed for free. Nizamuddin Dargah: So vibrant, colourful and so full of life. (Photo: Twitter)

The fragrance of incense grew stronger as I approached the dargah. I saw people carrying chadars (sheets) of flowers in their hands. There was so much of colour all around! Shops were buzzing, a man selling jewellery, people praying simply by touching the walls of the dargah. I was dazzled at seeing the diversity all around me.

I was asked to take off my shoes before entering.

Being a Christian, we have never taken off our shoes in a church.

This too was a learning.

Inside the dargah, it was truly beautiful. On the sides, qawwals sat and sang, while people were going inside the shrine to put chadars — and so did I.

This impression of the dargah is imprinted in my memory — because everything there was so pure. It was an assignment for me which I did. It also helped me learn about how other people live. At no point did my imaan (faith) take a hit. Nor did people in my church or my own priest raise questions over me going to a dargah. Neither did anyone in my parish have anything negative to say when in 2017, when I had gone inside a temple in Farukhnagar, which happens to be one of the oldest places of worship for Hindus — and is so unique because at the same place, there is a mosque and a gurdwara together there. 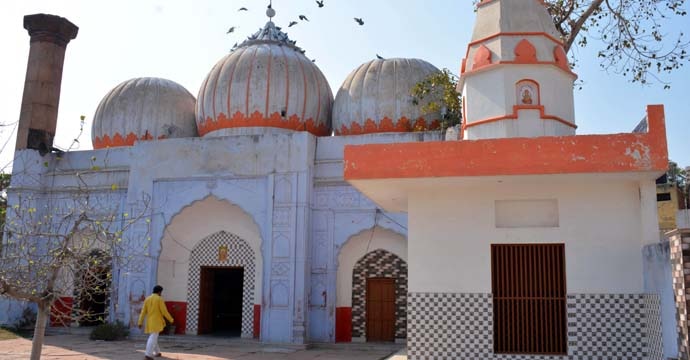 A temple-mosque-gurudwara I saw: Farukhnagar is unique as it houses all three homes of faith in one. (Photo: Via author)

Not to miss, the numerous times I have stepped inside Delhi's Bangla Sahib gurudwara as a reporter. Going in, one would find devotees filled with so much love and willingness to serve. Their behaviour, their quietness, their devotion can move anyone. Just like the patience you learn waiting for your turn to have halwa inside.

Did loving all this, learning from it, working on it at any point make one a lesser Christian?

No, I was still reading the Bible then. I was going for communion and I am doing it even today.

My work, or my going into a religious place which is not mine, can never come in place of my imaan.

As a young professional, I want to ask you, Zaira Wasim — why bring faith into a professional decision?

Whether you go or stay in Bollywood could simply be a personal choice. By bringing religion into it, what message are you giving your fans? Won't others now think, oh, a true Muslim should never enter others' religious shrines, depict their religious rituals, wear the markers of their faith? Is that idea what we, as young Indians, should spread?

Surely we should all learn from excellent role models before us. And you have no less in your field of work than the Khans.