You thought Salt Bae's viral Rs 1 crore bill was bad? A steak at his Qatar Nusr-et Steakhouse costs a bomb

In his most recent exploits, the celebrity influencer chef Nusret Gökçe, better known as Salt Bae, dropped jaws after posting a ridiculously exorbitant bill paid by customers to his restaurant, amounting to approximately Rs 1.3 crore. We take a look at how his infamous steaks are priced around the world.

The Turkish chef originally started out as an Internet sensation whose technique for preparing and seasoning meat became a hugely popular meme in 2017. He became more widely known as Salt Bae through these viral Internet videos and memes that show him "suavely" cutting meat and sprinkling salt on his expensive steaks.

Due to the viral exposure gained from this post, Gökçe's profile has expanded enormously, and he has served a wide range of celebrities and politicians from around the world.

Gökçe owns a chain of luxury steakhouses in countries across the world that gained immense traction following his rise to Internet fame. The restaurants are named Nusr-Et, which is a stylisation of his own name, along with "Et", which means "meat" in Turkish.

The Rs 1.3-crore bill: He made news again recently after posting a picture of a bill charged to a customer at the Abu Dhabi branch of the Nusr-Et steakhouses which totalled to 615,065 dirham or Rs 1.37 crore.

The Instagram post sent the Internet fuming, with many criticising the millionaire chef’s flamboyant display of wealth amid economic crises around the world...

...to which Gökçe responded promptly with an Instagram story 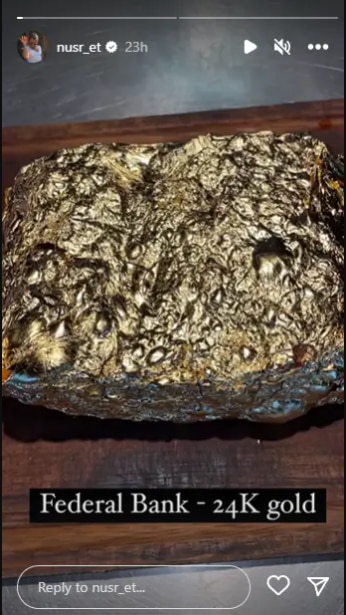 We compiled a short list of how much his prized ‘Ottoman Steak’ is priced at various Nusr-Et branches across the world. Have a look:

Though his steaks cost an arm and a leg (and perhaps a few vital organs), one would expect them to be exquisite tasting at the very least. However, that doesn’t seem to be the case at Nusr-Et; what with the steaks being described as overcooked and mediocre.

World Cup fans in Doha can rejoice though, as they can enjoy an average (but gold-plated) Ottoman Steak for a modest Rs 21,000. For some context, the highest category tickets for the ongoing Group Stage matches at the World Cup were priced at Rs 18,000.

Would you pay this money for an Ottoman Steak?