Kanye West claims that some of his Yeezy designs have been used by Adidas for non-Yeezy products, starting an Instagram war (photo- DailyO)

If one scrolls through his Instagram right now (hopefully before the rapper-entrepreneur deletes all of them), one can see that he is lashing out against top-ranking Adidas officials, particularly the German multinational’s Senior Vice-President Daniel Cherry. 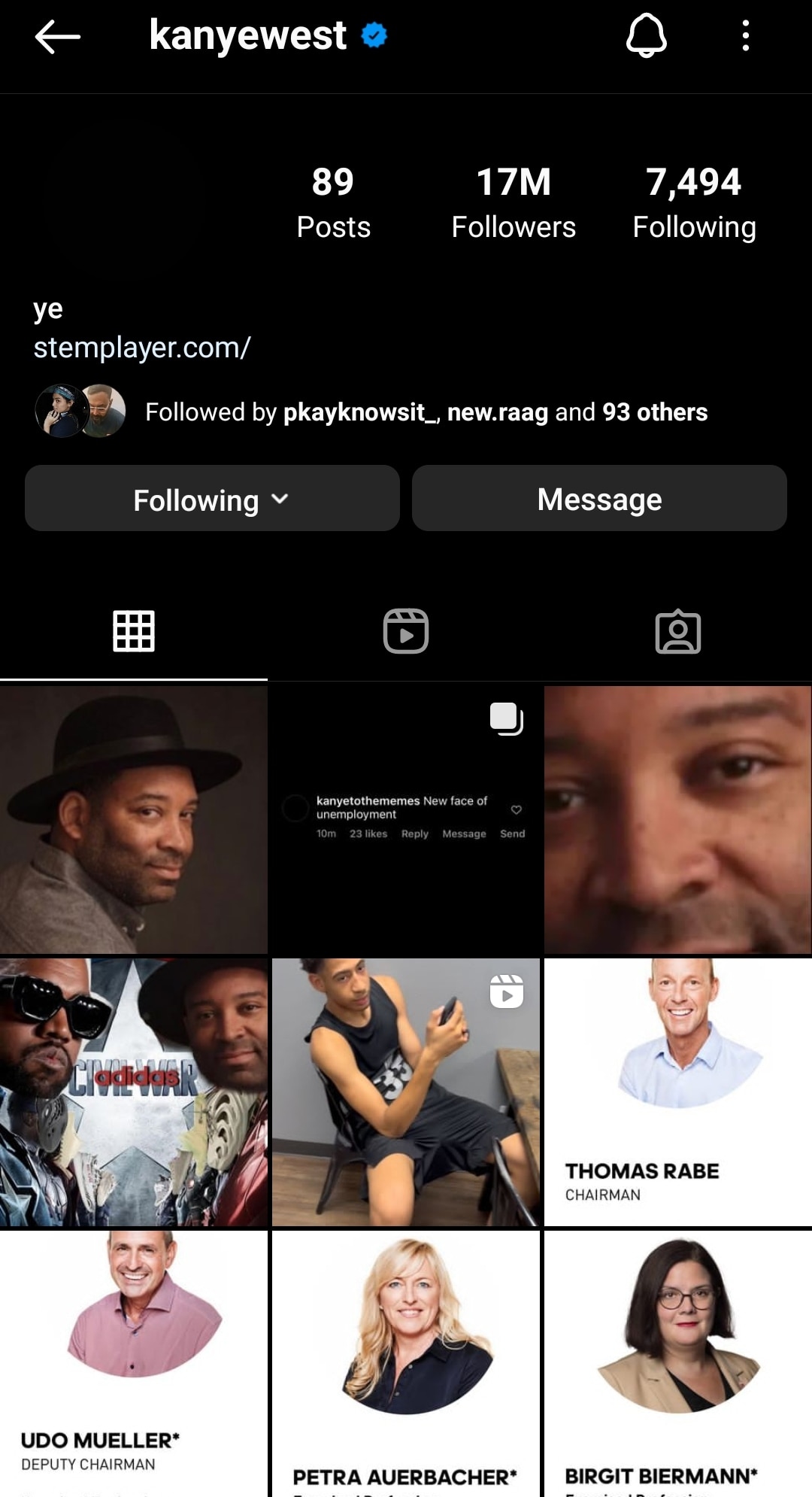 So, why is Ye pissed at Cherry? Starting with the release of Boost 750 in 2015, Kanye and Adidas have had a long-running fashion collaboration with his Yeezy line producing sneakers, jackets, track pants, shirts, and even lingerie. His contract with Adidas is supposed to last until 2026.

But now, the rapper alleges the brand to have snatched significant creative control from him and even used Yeezy designs for some non-Yeezy shoes.

While Kanye is always in the news for brewing trouble, the Adidas shoes adiFOM Q and the Adilette 22 seem to indeed closely resemble Kanye’s products. The former is particularly similar to the Yeezy foam runners with their oval cut-out designs. As for the Adilette sliders, Kanye is of the view that they are just a rip-off of his own Yeezy sliders with slightly redone colour tones.

Mocking Daniel Cherry (and his hat): Daniel Cherry can be often spotted wearing a black hat which has now become the butt of Ye’s jokes, as can be seen from his meme-worthy Instagram posts. Just take a post from 2 days ago as a case in point where he zoomed in on Cherry’s post and added a caption that read, “Black hats matter BHM”. Another post featured a poster of the Marvel film Civil War with Kanye and Cherry’s faces photoshopped on Iron Man and Captain America. He then went on to ask his followers to suggest new names for Daniel Cherry and even attacked his other fashion choices. “Daniel Cherry Pop, I knew by the jean jacket you was wearing when we first met that we could never truly be friends.”, reads his Civil War post.

If this wasn’t enough, Kanye also shared the images and designations of other Adidas top shots. And as it is a Kanye post, sarcasm, personal attacking, and sheer randomness are imminent. Each of these posts have captions like “Good vibes”, “I was having a good weekend until now”, and even “Uuuuuuuuum”!?

Even GAP wasn’t spared: Kanye had previously lashed out at GAP, another company that has had collaborations with him but seem to be taking further creative control in their own hands. In August, he had also accused GAP of stealing designs from his Yeezy Gap Engineered by Balenciaga collaboration. 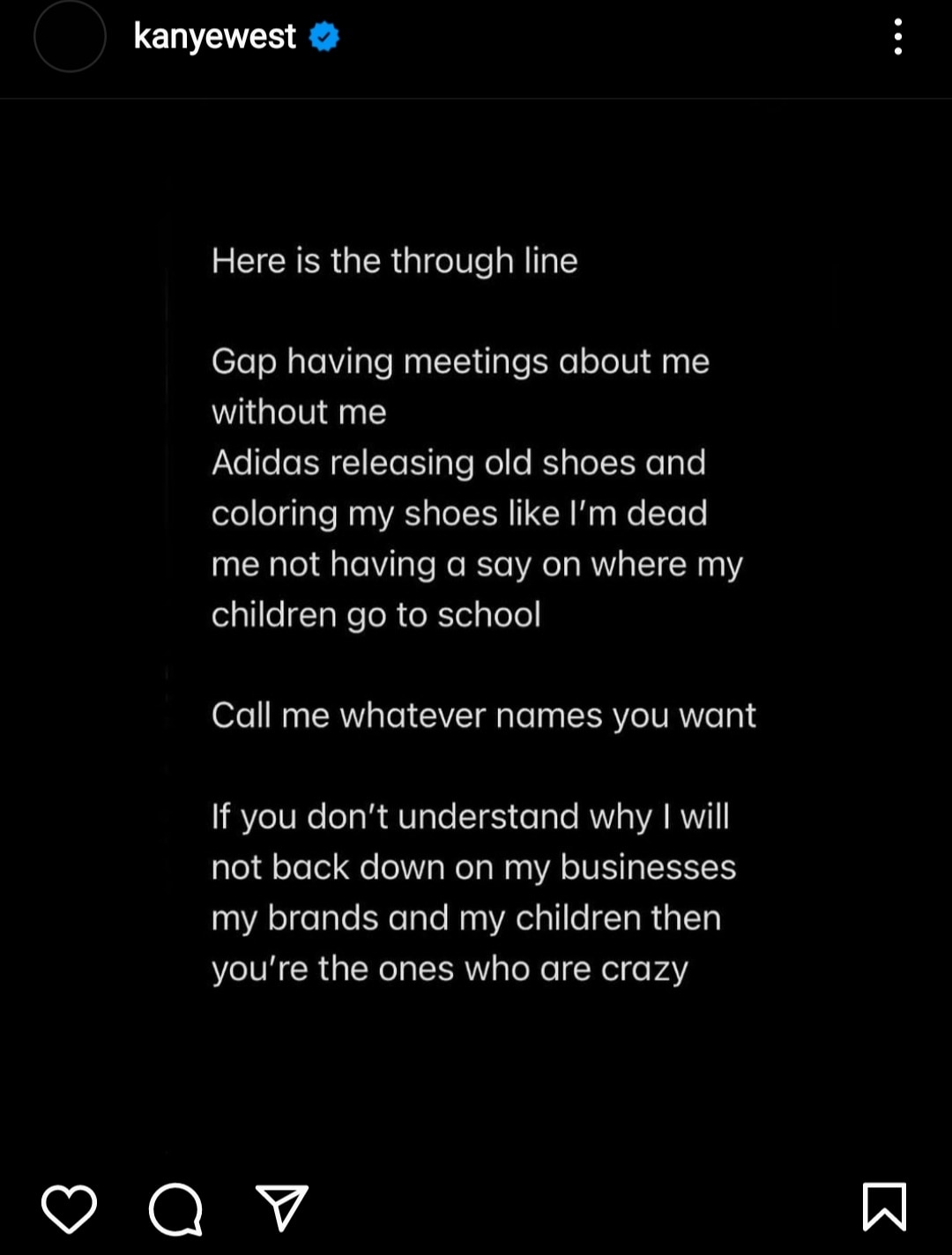 To quote Kanye’s post from 3 days ago where he addressed both his corporate clashes and the limited custody over his children after his divorce with Kim Kardashian, “Gap having meetings about me without me. Adidas releasing old shoes and coloring my shoes like I’m dead…Call me whatever names you want. If you don’t understand why I will not back down on my businesses and my brands and my children, then you’re the ones who are crazy.”

The story on Kim K’s “diarrhoea” might be fabricated though: In the middle of the conversation on Kanye’s clash with Adidas, a story that circulated with his Instagram handle was on Kim Kardashian’s diarrhoea issues.

The story read, “Kim gets diarrhea a lot. Like way more than a normal personal should have it.” However, Kanye took out time to clarify that this is a fabricated story. His Insta post from yesterday reads, “This was not from me. Someone copied my style of text and wrote something not funny.”

So…will Kanye be blocked again? From that drunk night at the MTV Video Music Awards to his Presidency campaign to calling his bipolar disorder a superpower to endless attacks against Pete Davidson, Kanye is no stranger to controversy. “This means war” seems to be the motto everytime he has bad blood against anyone. After all, one of his recent Insta posts featured an edited version of Sun Tzu’s Art of War with the cover reading The Art of Ye! And while Twitter is a good platform for him to share the randomest of his thoughts, Instagram has become his weapon of choice when it comes to his battle mode. Recently, the rapper did draw much flak for his sarcastic jabs at Pete Davidson (whom he refers to as Skete Davidson) through Insta posts that have now been taken down.

With most of his posts being reported under hate speech, Kanye’s Twitter and Instagram accounts have been blocked several times before. And the multi-platinum hitmaker knows how his recent outburst might tick off Instagram yet again.

In one of the 89 posts, Kanye wrote, “Just in case Instagram never lets me post again I need everyone to know one last thing....Black Hats Matter”. 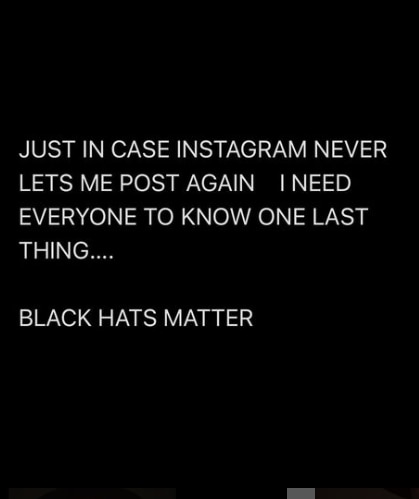 Whether this is yet another personal shot at Daniel Cherry’s fashion choices or a deeper message on how black creatives are robbed of credit and creativity in the fashion world, that is open to interpretation.

In another post, Kanye claims that he is intent on walking away from Adidas with the 15% royalty that the company owes him. So, will his contract be terminated? That will be seen once Adidas issues a formal response. Till then, Kanye’s Instagram grid remains as meme-able as possible.