The iPod is dead. 5 ways it changed music, Apple and the world

Twitter is nostalgic over Apple pulling the plug on iPod. The small mp3 music device revolutionalised the way people listened to music and even Apple itself. Here is the story of iPod.

There is an entire generation that grew up with the iconic iPod. For those few Indian children who had the iPod, it was the device that screamed ‘cool kids’. During high school, riding on the school bus, listening to music on the iPod was the biggest flex.

Even the music that these ‘rich’ kids would listen to on the iPod would be different, a sign of sophisticated American taste. While Taylor Swift, and Hannah Montana AKA Miley Cyrus were the common ones, songs by Linkin Park and Green Day would be the cherry on the music taste.

In the US, where the iPod was pretty common, it was next to nothing to buy songs from iTunes. But back here in India, desi kids needed to find a jugaad instead of splurging on buying songs. So, it was a task to even get the music on to the iPod. But when the time came to show it all off, it was all worth it. From downloading the songs on websites like songs.pk, it would be carefully uploaded to iTunes, complete with artist's image, name, the title of the song, etc. Sharing of music happened over pen drives.

And for those kids, like me, who watched other kids listen to music on the iPod on the school bus, the device, was a source of jealousy.

Almost everyone has a story with the iPod. The device launched by Apple way back in 2001, revolutionalised the music industry as a whole and even revolutionalised Steve Jobs’s Apple Inc itself.

Now, Apple on May 10, 2022, announced that it is ending the iPod product line. After 21 years, the iPod, the source of pride for a generation of kids, and the source of envy for others is dead. Sales will continue till the stocks for the last updated iPod – the iPod touch – remains. The iPod touch is selling for a little over Rs 19,000 in India and is still available, in case you want to own the iconic piece before it's unavailable forever.

So, how did the iPod change Apple, the music industry and the world? 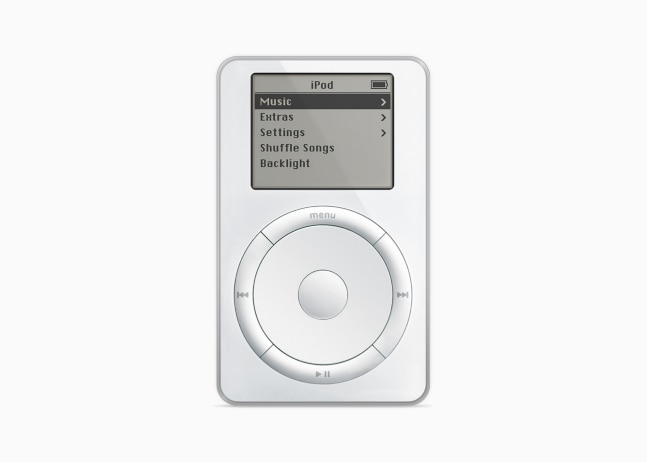 When the iPod was launched in 2001, the music industry in the US was struggling with illegal file-sharing of songs and piracy of music. Record labels had a hard time catching up with the songs being copied from one file to another in minutes.

Apple had launched iTunes just a few months ago and with its iPod launch, the music industry found a source of revenue from legitimately downloaded songs. iTunes and the design are what set the iPod apart from the other digital music players like Sony Walkman.

Of course, the story was different in the Indian context.

Steve Jobs launched the first-ever iPod in 2001 with the tagline, “1,000 songs in your pocket,” wearing his signature black turtle neck T-shirt and blue jeans.

Before the event, audiences were told, “Hint: It’s not a Mac.”

Then the 5GB iPod could hold 1,000 songs, enough to pry people away from those CDs and cassettes. Now, the iPods can hold over 90 million songs.

3. HOW THE iPOD MADE APPLE The iPod mini was launched in 2004. Photo: Apple

For Apple, in the slow-growing Personal Computer (PC) industry dominated by Microsoft Windows, the iPod was a game-changer. But it was not only iPod, it was iPod with iTunes that struck the ice. Without iTunes, Apple probably wouldn’t have become as profitable as it is today. It wouldn’t sell music, apps, movies, TV shows, e-books, anything.

So far, Apple has sold 450 million iPods across various versions.

Somewhat.. it’s an honor to know that the iPod is a cornerstone in Apple’s history and in computing/tech history. It may be gone but it will never be forgotten… long live iPod! https://t.co/CmX1e41Dnb

It wasn’t Steve Jobs who came up with the iPod. It was Tony Fadell who created the music player for Apple. And at first, Fadell almost didn’t join Apple. In his book, Build: An Unorthodox Guide to Making Things Worth Making, he says that Apple was a very different company then than what it is now and a lot of people didn’t want to join it.

The iPod also wasn’t thought up by Fadell overnight. It came after nearly 10 years of failure after failure for the iPod to be created. But now that is all history.

Once, Fadell also shared the many prototypes the Apple team came up with for iPod nano in 2005.

These are various mockups of the iPod Nano, we explored every possibility - what if the screen was this big? What if the wheel was that big? What if there was no wheel? #BUILD #BUILDtreasurechest #Buildbook will be officially released tmrw May 3rd! https://t.co/NKMxGjoEgg pic.twitter.com/XMUHztyj2E

The iPhone is Apple’s largest selling product worldwide today. The first-ever chunky-looking, touch screen smartphone - the iPhone - was inspired by the iPod. It was Apple’s experience-making consumer electronic products that made the company dip its toes into the then nascent smartphone industry.

And with it, Apple once again revolutionalised our understanding of phones. TIME magazine says without the iPhone, there would have been no Android, and the innumerable mobile apps would take much much longer to break into the market.

The iPod still has a cult following from the zillions of music lovers. And if you do own an iPod, don’t throw it in the trash yet, as some of them are even selling for upwards of $20,000.

Wow to have lived through the iPod .. I’ll let me kids know https://t.co/JkVRtYoK0t

But the rest of us who are now looking back on our childhood memories of the iPod, we all wish that our future children and generations will know about the iconic device that changed the world.

#Stevejobs, #Tonyfadell, #Apple, #IPhone
The views and opinions expressed in this article are those of the authors and do not necessarily reflect the official policy or position of DailyO.in or the India Today Group. The writers are solely responsible for any claims arising out of the contents of this article.