It's latest line-up — with SoundLink Micro and SoundSport Free — shows a lot of promise.

Over the years, Bose has gone on to become one of the more trusted brands in the world of audio. In stark contrast to its humble beginnings in 1964, it enjoys legions of followers that swear by its products. And for good reason. From speakers to headphones to wireless earphones, the company today has a vast range of quality products to its credit that promise great value if you're in the market for something to enhance your listening experience. However, as is the case with most devices, such stellar quality comes with a price tag.

The premium pricing of Bose products has been accepted in western markets. It's in markets such as India where price has acted as a barrier for its growth and hampered its chances of making serious inroads. But Bose could well change that with its latest products — the SoundLink Micro, a small water-resistant Bluetooth speaker, and the SoundSport Free, the company's first truly wireless earphones.

Though both appear to be sound products in their categories, it's the latter — with its Rs 8,890 price tag and features set — that is aimed at a wider audience and could make a dent in the market.

The latest addition to its Bluetooth-enabled portable speaker line-up in India, the SoundLink Micro, is the company's smallest and most affordable speaker to date — and it's one that doesn't compromise much on sound or features. At Rs 8,890, the rugged speakers are built to endure tough conditions and come with a strap on the flip-side so they are easy to latch on to bags, backpacks, bikes, coolers and other gear.

The company claims the Micro can handle "more than the industry’s IPX7 rating" and is tested to withstand soapy, chlorinated and even salinated water. The outer shell is made of soft silicone to protect it from scratches and dents besides dust, dirt and sand.

Weighing just 290 grams, these speakers work for trouble-free listening on-the-go. Despite the size, Bose claims that the speaker is capable of delivering much more powerful sound than you would expect from a system of the size.

The Micro has also been fitted with some really cool features to justify its price tag. It uses simple voice prompts for Bluetooth pairing, has an integrated speakerphone, and a multi-purpose button to take calls. Interestingly, using the Bose SoundLink application, users can also pair two Bose Micro speakers to turn them into a stereo set. There is also a party mode that allows you to pair multiple Micros or other SoundLink speakers.

The battery pack on the device is also sturdy and promises up to six hours of runtime. The other piece of hardware that Bose is bringing to India is the SoundSport Free. These are the first truly wireless earphones from the company, and as such will target a select audience and serve as a more than decent upgrade on the wireless AirPods launched by Apple.

The earphones are extremely light, weigh only 10 grams each and come with Bose's proprietary Silicone StayHear tips to ensure a secure fit.

They are IPX4 water-resistant and can withstand exposure to sweat, light rain, and splashes of water. The earphones come neatly tucked inside a charging case which magnetically holds each earbud in place, and provides two additional full chargers.

There is also a nifty "Find My Buds" feature — which allows you to locate the earbuds via the BoseConnect App in case you ever lose them.

In our brief interaction with the SoundSport Free, the earphones impressed with their sound quality. However, the SoundSport Free does not come cheap. The features and the ease of being truly wireless reflects in its price: Rs 18,990. 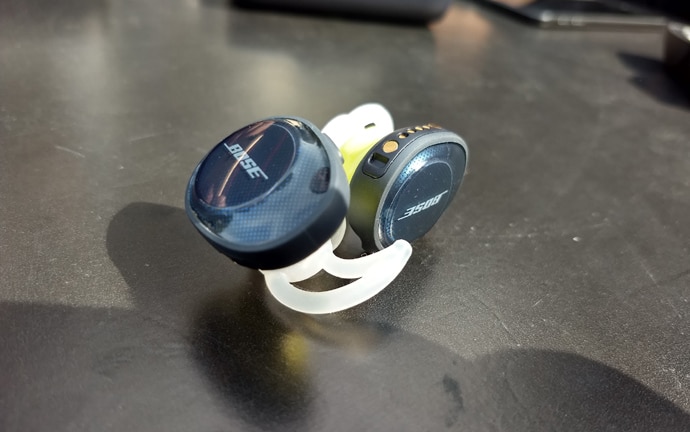 Will they make a dent in the Indian market?

Like we have mentioned in the piece, the more likely candidate here would be the Soundlink Micro. The speaker is rugged, has an IPX7 rating and promises loud and clear audio — all of that without truly breaking the bank.

It is currently the most affordable in Bose's line-up of audio devices in the country — this gives it a great chance at success. The portable speaker also has a number of nifty tricks up its sleeve, which further make it an exciting proposition.

There's no denying that at the price, the Micro isn't exactly cheap and will face tough competition from the likes of JPL Flip, and the slightly cheaper UE Wonderboom, which also offer a similar IPX7 rating.

However, the fact that it carries the name Bose and promises good acoustics, rugged exteriors, waterproofing and some cool features will make it stand out as an attractive choice.

#AirPods, #Wireless earphones, #Bluetooth speaker, #SoundLink Micro
The views and opinions expressed in this article are those of the authors and do not necessarily reflect the official policy or position of DailyO.in or the India Today Group. The writers are solely responsible for any claims arising out of the contents of this article.