Eating insects to save the planet? Research suggests lab-grown insect meat could be the most sustainable way forward

But will this be easily digested by most of us out there?

With food production getting increasingly non-viable and becoming heavily resource-intensive, alternative sources of food have become the intensive focus of research.

For instance, research has established that livestock farming is destroying our planet — it is a major cause of land and water degradation, biodiversity loss, acid rain, coral reef degeneration and deforestation. Add all of these together — you get a perfect recipe for climate change.

Lately, scientists have been experimenting with a variety of genetically modified animals and lab-grown meat as potential solutions.

The latest on the list is lab-grown insect meat.

Wait — don't visualize a cluster of cockroaches on your plate.

Natalie Rubio from Tufts University in the US, who led the study, says that lab-grown insects, fed on plants, and genetically modified for maximum growth, nutrition and flavour, could be a superior greener alternative for high-volume nutritious food production. She elaborates in her research paper published in Frontiers In Sustainable Food Systems that compared to cultured mammalian, avian and other vertebrate cells, insect cell cultures require fewer resources and less energy-intensive environmental control “as they have lower glucose requirements and can thrive in a wider range of temperature, pH, oxygen and osmolarity conditions,” she explains. 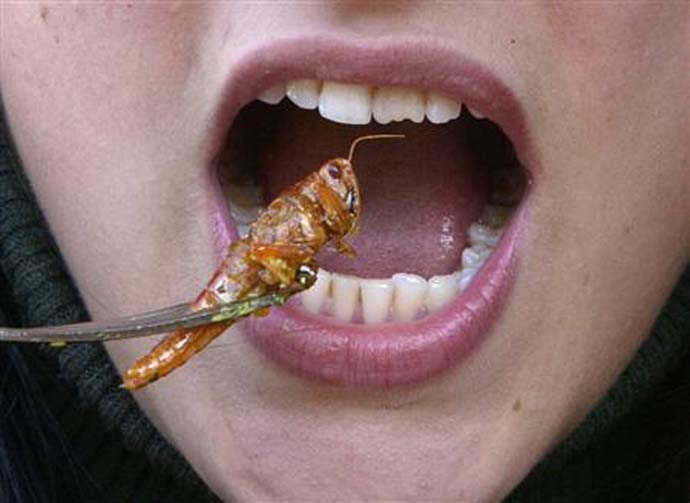 Food for Thought?! Can lab-grown insect meat be the answer to food security? (Representational image: Reuters)

The research came about owing to the environmental, public health and animal welfare concerns associated with the current livestock system.

Rubio says that it is vital to develop more sustainable food production methods — plant-based diets, insect farming, lab-grown meat and genetically modified animals have all been proposed as potential solutions. So, which is best, you ask? Science answers, “All of these combined.”

In the past, genetically modified livestock was explored in order to produce less methane or resist more diseases. However, it could do little to relieve issues like land and water degradation, deforestation and biodiversity loss — the stress on resources was only marginally less than the non-GM variant.

Options like soy and fungus-based substitutes to meat were also explored (think: “vegan” chicken). But they failed to hit the sweet spot with meat lovers, and some plant crops turned out to be just as thirsty as livestock, if not more. Culturing beef, pork or chicken cells might require even more energy and resources than livestock farming.

It has been observed that insect farming has a much lower water and space requirement.

Further, when unit portions are compared, the sheer percentage of one insect is more edible than the palatable portions in one goat — to put it simply, twice as much of a cricket is edible than of a big-boned, big-bellied bovine.

To tackle the challenge of bulk and quantity, researchers established that a lot more insects can be cultivated sustainably as they squeeze water requirements and space savings more than any other source of meat. "Alterations necessary for large-scale production are also simpler to achieve with insect cells, which are currently used for bio-manufacture of insecticides, drugs and vaccines," says Rubio. Would you like a snack? Freeze-dried crickets was reported to be edible in the 'Insects As Food' conference in Detroit. (Photo: Reuters)

As for the taste, while researchers claim that this would come without compromising on taste, no one knows that for sure — yet.

The short answer, says Rubio, is that nobody knows.

"Despite this immense potential, cultured insect meat isn't ready for consumption yet. Research is ongoing to master two key processes: controlling the development of insect cells into muscle and fat and combining these in 3D cultures with a meat-like texture. For the latter, sponges made from chitosan — a mushroom-derived fibre that is also present in the invertebrate exoskeleton — are promising options." Eventually, insect labriculture (agriculture in the laboratory) could turn up some extraordinary flavours.

"Advances in insect cell culture and tissue engineering can potentially be translated to lobster, crab and shrimp, due to the evolutionary proximity of insects and crustaceans," she further adds, fuelling our fantasies further.

From what this research says, future food production could be a sight to behold — silent groups of insect muscles, flexed to the pulse of lasers, in vast pools of soy juice.

Also read: The Planetary Health Diet: How to save yourself, and earth, with a new food plan

Post your comment
#Climate change, #Planetary health diet, #Insect based diets, #Gm foods
The views and opinions expressed in this article are those of the authors and do not necessarily reflect the official policy or position of DailyO.in or the India Today Group. The writers are solely responsible for any claims arising out of the contents of this article.