In Delhi's Khirki, a show explores crossover of science into art

Khoj residency has thrown up interesting concepts and ideas cutting across disciplines and boundaries.

Residents and bystanders in Khirki village in south Delhi were amused recently when they saw a strange human figure walking around with fungus growth all over.

The person under the weird-looking body suit was Tyśka Samborska, a Polish visual and performance artist participating in an international art and science residency programme. The idea of this live art installation, named "Show Me What You Keep Inside", is to explore the relationship between the human body and the microorganisms living inside us. "I have tried to look at a situation where microorganisms start to grow and become dangerous for a human body, when roles start to change and our body becomes weak, so easy to destroy and to be consumed," said Samborska. Her work belongs to a new genre of installation art where artists and scientists work together to explore new ways of looking at scientific advancements and their relationship with the environment and humans.

Johanna Schmeer, an artist and designer from Germany, through the objects designed by her, is investigating the merging of technology and human body and how body-technology hybrids could be used in unusual ways to interact with the environment.

The sculptural wearables being developed by her can be worn on different body parts and deploy new advances in fields like nanotechnology and 3D printing. These wearables are designed to remove different types of pollutants like nitrogen, carbon and particulate matter from the air. The Particulate Matter wearable, for instance, is a 3D printed sculpture with electrostatic properties. The Particulate Wearable by Johanna Schmeer.

"To be worn on legs, it uses kinetic energy from body movement to remove particulate matter from the air," pointed out Schmeer. The carbon dioxide wearable is filled with spirulina algae in sodium alginate gel and can remove carbon dioxide from the air. "The idea is to bring together artists and scientists as equal partners, with an aim to create a space which pushes the boundaries of scientific research and creative expression," explained Sitara Chowfla of Khoj International Artists' Association, which is hosting the residency in collaboration with Wellcome Trust/DBT India Alliance.

The programme has attracted artists from India, Russia, Germany and Poland. Mohan Polamar and Vivek Muthuramalingam from Bangalore are working on an immersive and experiential project that challenges the concept of being human in the times of climate change. Sonia Khurana, a visual artist from Delhi, is focusing on representation of female reproductive processes in her visual project called "missing womb". 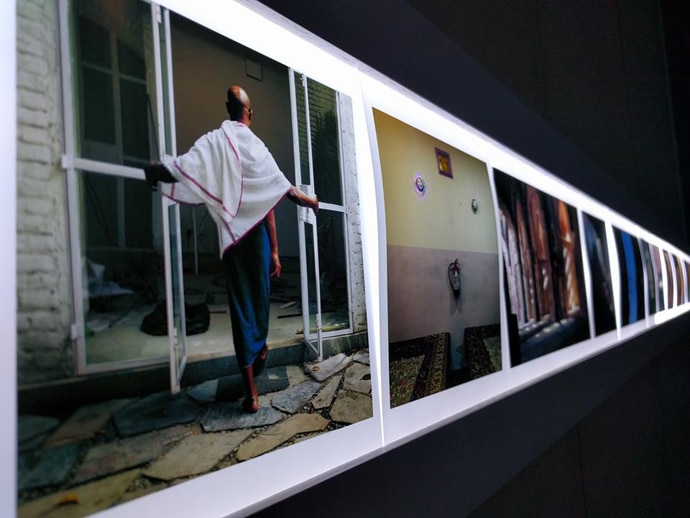 Artist Gagan Singh is working around the theme of schizophrenia and mirror neurons through conversations with Urvakhsh Mehta, who is a researcher at the National Institute of Mental Health And Neuro Sciences (NIMHANS), Bangalore. The project of Alexey Buldakov from Russia on urban wildlife and inter-species interaction and its objective is developing a park of urban fauna.

Also read - Why adults are getting hooked to colouring books

The art and science residency has thrown up interesting concepts and ideas cutting across disciplines and boundaries. Such efforts need to be encouraged as part of outreach by Indian scientific agencies. Hopefully, they will soon wake up to this new field.

Post your comment
#Delhi, #Environment, #Science
The views and opinions expressed in this article are those of the authors and do not necessarily reflect the official policy or position of DailyO.in or the India Today Group. The writers are solely responsible for any claims arising out of the contents of this article.