Trump's push to NASA for Moon mission is a game changer

US President Donald Trump has directed NASA to undertake human missions to the Moon and subsequently to Mars. After Trump took over as president of the only superpower in the world, the world witnessed much negative decision-making from his administration: from cutting down on visas for white-collar job seekers to stopping the entry of people of certain nationalities to the US to dumping the climatic treaty to shifting the US embassy to Jerusalem against the wishes of the United Nations.

In contrast, the recent planetary missions-related policy announced by Trump is music to many ears, mainly because the businessman Trump has, for the first time, been found looking beyond simple financial calculations and doing something for the growth of science.

Surely, president Trump is dreaming big. For this project, various agencies in his country would be required to develop their vast technical ability. Also, massive financial investments would be required for missions to the Moon (and Mars). On July 20, 1969, Neil Armstrong became the first human to put his foot on the Moon (Apollo 11).

Some 45 years back, in December 1972 (Apollo 17), the last human walked on the Moon’s surface. Till date, only Americans have succeeded in undertaking manned missions to the Moon. Now, Trump is keen on reinventing the United States’ history. There would be natural curiosity to question his timing and intent. It is important to appreciate that this decision by Trump has scientific, economic, political and strategic connotations.

The Apollo-era technology is going to be of no use for the future Moon missions. During the last four to five decades, significant developments have taken place in various fields of technology, such as sensors, communication, navigation, materials, rocket engines, robotics and artificial intelligence.

In addition, much knowledge has been generated with regard to space meteorology, deep space travel, farming on planets, and technology required for human sustenance in space. It is expected that a focused project like the human Moon mission, followed by the Mars mission would bring in revolution in various fields of science and technology. 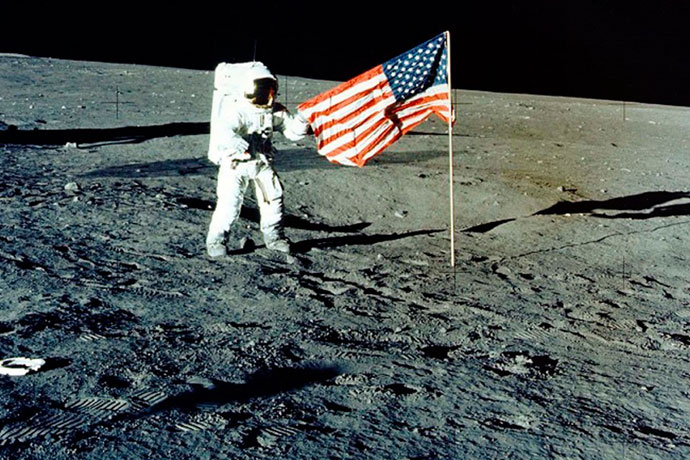 Charles "Pete" Conrad Jr. stands with the U.S. flag on the lunar surface during the Apollo 12 mission in 1969. Photo: The Atlantic

Obviously, various spinoff technologies could also emerge from such a quest. Such a mission could also assist the research on Helim-3, a substance available in abundance on the Moon’s surface — and theoretical projections indicate that, if this substance is brought back to the Earth, it could help resolve energy crises (could replace the existing model of nuclear energy).

During the last few years, private space agencies like SpaceX, Blue Origin, and Virgin Galactic have made a major mark in the global space market. Such agencies have their own plans when it comes to missions to Moon/Mars. Obviously, NASA is expected to get major contributions from private industry to further its space agenda. During 2009, then US president Barack Obama had put a cap on the Moon programme owing to the cost factor. Now, it appears that while NASA could be working on a better budget, there could still be some dependence on private industry.

Eventually, the human Moon mission could emerge as a joint venture of NASA and the US space industry. Politically, Trump is expected to receive support from all parties. After all, this is going to be an American Dream! With the overall project being finalised, there could be a possibility that few other countries show interest to contribute to this programme. US policymakers would have to be innovative to ensure that such a massive programme does not bring in major financial liabilities.

The strategic angle of Trump’s decision needs deep analysis. During the Cold War period, the erstwhile USSR was very keen to have its own human Moon programme.

Unfortunately, the Soviet crewed lunar programme remained unsuccessful in spite of best efforts. The Soviets lacked the infrastructure to build bigger rockets (and rocket engines) which could take the crew to the Moon.

It was not accepted by them during the '70s and '80s, but it was known that they are keen to compete with the Americans; the US-Soviet race to the Moon was evident. Now, in the 21st century, would there be a similar contest?

There are ample hints in this direction, with China indicating that it plans to undertake a human mission to the Moon by 2030. In addition, there is a possibility that private players like Elon Musk of SpaceX will throw their hats in the ring. If the Americans want the Eureka moment of putting a US national on the Moon’s surface before China, it could be in their interest to ensure that no private player undertakes solo missions. Americans need to ensure that the private industry remains on their side for missions to the Moon and Mars.

It is important to understand that the race to the Moon is not only about the Moon, but also a demonstration for showcasing global technology leadership. During the Cold War era, American domination in the field of technology was mostly challenged by the Soviets.

In the 21st century, China is making a strong case for technology leadership. In recent times, the Chinese have excelled in fields like supercomputing and quantum computing. The Chinese leadership has conceived a major inter-continental infrastructure project like the One Belt, One Road (OBOR) initiative.

In the field of satellite-based navigation, the US supremacy — for many decades — with their GPS architecture has been challenged by China’s BeiDou Navigation Satellite System.

Also, China is developing its own space station, while Americans are part of a 16-member International Space Station (ISS). Today, Americans even have their own space shuttle to carry astronauts to ISS and are fully dependent on their one-time rival Russia.

Naturally, to retain the technological edge over the rest of the world, Americans are required to do something “titanic” and the human mission to the Moon could be seen as an expression of such a wish.