FaceApp's Indian and Black photo filters are quite obviously racist

Popular photo filter application, FaceApp, which allows users to take selfies and then add fun filters to them to change their appearance by adding a range of photo filters, faced major backlash after its developers on August 9 rolled out an update allowing new filters that have been termed racist.

The application first became a sensation in February 2017 due to its ability to make its users look older, younger, more masculine, or more feminine, and even add a smile to their unhappy face.

However, the latest update which brings new filter options – Asian, Black, Caucasian and Indian – has understandably led to the outrage, prompting its developers to quickly retract the update.

me and my three ethnically diverse half brothers unequivocally condemn the new faceapp filters pic.twitter.com/uMNfIrb73f

What is the app all about?

This Augmented Reality (AR) platform which uses neural networks to provide photo-realistic face-morphing that not just adds a layer over your picture but instead edits the image to bend the reality in "few choice ways".

Speaking to TechCrunch earlier in February, its founder and CEO Yaroslav Goncharov explained the idea behind the application and how it's different from other photo filter apps available in the market.

“We developed a new technology that uses neural networks to modify a face on any photo while keeping it photo-realistic. For example, it can add a smile, change gender and age, or just make you more attractive... Our main differentiator is photo-realism. After applying a filter, it is still your photo."

As compared to other mainstream photo filter apps, its creators claim FaceApp uses unmatched technology such as employing "deep generative convolutional neural networks" for editing pictures. He adds, "We think that we are quite ahead in terms of technology. As far as I know, there are no products or research papers that can claim similar quality on this task." 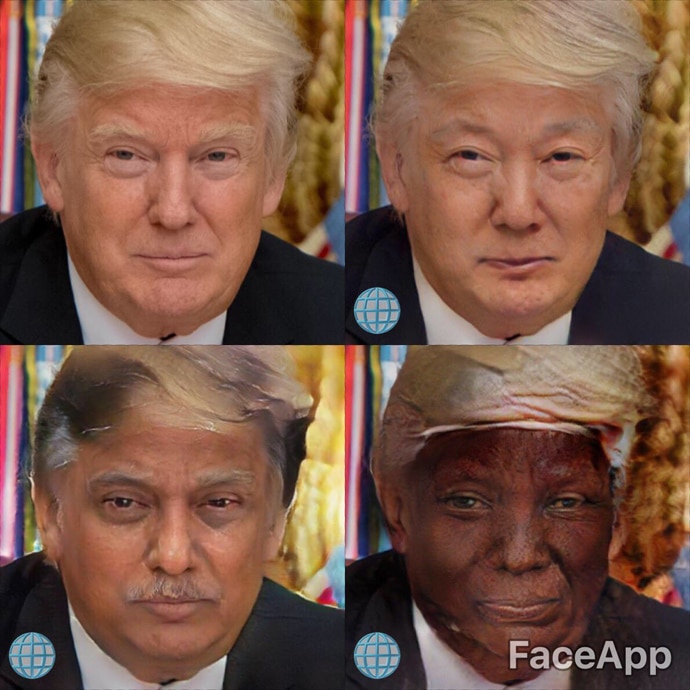 Irresponsible use of technology

The application till now has been a hit and has gone viral in countries across the world, and for good reason. In a sea of similar photo filter apps, FaceApp's push for using photo-realism has helped it stand out. The impressive use of machine learning and AR has further helped it become a hit.

But then, what good is this "unmatched technology" if it's not used responsibly?

FaceApp's faux pas was at best an unconscious attempt at peddling racial stereotypes. At a time when societies around the world are battling hard to fight unsavoury behaviour that propagates discrimination based on a person's skin colour and ethnicity, this decision by the developers of an application used by teens and pre-teens to roll out "race filters" can only be termed as irresponsible.

What's worse is that this isn't even the first time that the developers have erred in the short history of the app. Shockingly, after its launch in February 2017, FaceApp chose to add a beautifying "hotness" filter to the app. But as it turns out, there was no beauty to the idea behind this filter since all it did was simply "whiten" the complexion of the user to make them look "more beautiful".

So I downloaded this app and decided to pick the "hot" filter not knowing that it would make me white. It's 2017, c'mon guys smh#FaceApp pic.twitter.com/9U9dv9JuCm

Having said that, it will still be unfair to single out FaceApp and its Russian developers for a move that is largely a product of a thought that lives and breathes shamelessly among us. In league with close to 20 other lesser-known apps, social media giant Snapchat had earlier in 2016 thought it fine to roll out a filter that promotes racist stereotypes of Asians. The feature allowed users to turn their selfies into Asian caricatures with cartoonish squinty eyes.

The feature was as insensitive and irresponsible as FaceApp's filters which in its misguided hubris attempted to change a person's racial identity by simply tweaking the colour of their skin.

In a world that still suffers from racial prejudices and witnesses hate crimes with regularity, the last thing we need are such big name influencers telling us "white is beautiful" or propagating gender and racial stereotypes.