China is waging a covert fake news war, and Facebook has turned saviour!

We must be living in a dystopian world. Because where else will you find China waging a covert world war with misinformation, and FACEBOOK playing the hero!

Imagine there’s a world war breaking out. Who do you think might save you?

In this modern, almost dystopian world, your best bet would be... ‘Facebook’ or Meta, as it is known now, and Twitter. Yeah, Mark Zuckerberg and Parag Agrawal to save the world from World War Z, people! 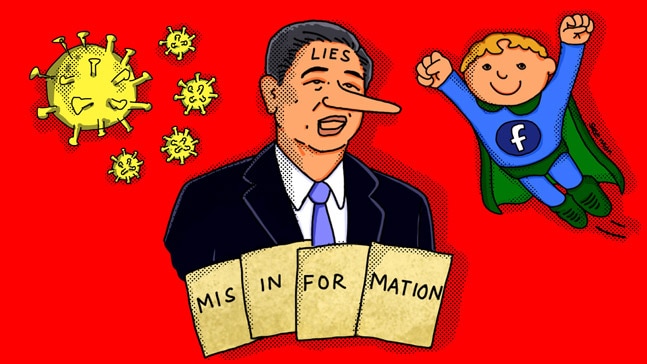 A covert war is being waged by several non-state actors and state actors, particularly China, with a motive to destabilise social order in rival countries. This war is being played out not in battlefields, but on your phones, on social media platforms like Facebook, Instagram and Twitter.

WHAT IS THE MISINFORMATION CAMPAIGN? Meta on Wednesday said that it took down over 600 accounts, pages and groups from Facebook and Instagram, connected to a Chinese network, for spreading misinformation on Covid-19. Suspended accounts include that of a fake Swiss biologist named Wilson Edwards (NO SUCH PERSON EXISTS).

“On July 24 of this year, a Facebook user who claimed to be a Swiss biologist called Wilson Edwards wrote a post criticizing the US government for allegedly intimidating the World Health Organization to keep investigating the origins of COVID-19 in China. https://t.co/sm1mRtnuOB pic.twitter.com/BmO8THbIfv

Meta said that these accounts were being operated in a coordinated fashion to sow conspiracy theories about the pandemic.

On the other hand, Twitter said it removed over 3,400 accounts operating as state-backed propaganda operations from China, Mexico, Russia, Tanzania, Uganda and Venezuela. Over 2,000 of these accounts were amplifying the Chinese Communist Party's propaganda on the treatment of Uighurs.

The punchline of the elaborate joke is that Twitter or Facebook or Instagram are banned in mainland China; yet being used to sow disinformation outside of the country.

Now, this particular firm is associated with Chinese state infrastructure companies around the world and also the Chinese ministry of public information security.

This network of accounts, pages and groups originating out of China and also linked to the State as mentioned above, was targeting global English-speaking audience in the US, UK, Taiwan, Hong Kong and Tibet.

Twitter found that at least 112 accounts linked to 'Changyu Culture', spreading propaganda on Uighurs, were associated with the Xinjiang regional government.

Today we're sharing information about attempts to manipulate Twitter – carried out by state-linked actors in six countries – and adding these datasets to our public archive. All associated accounts & content have been removed. https://t.co/PfBtK48aCe

WHERE DOES A SWISS BIOLOGIST FIT IN? Meta found out that an account claiming to be a Swiss biologist, Wilson Edwards, was spreading false news that US was putting undue political pressure on the World Health Organization to blame China for the Covid-19 pandemic.

It turned out that no such person existed, and the the account's origin was traced to China.

The fake biologist’s claim on Facebook and elsewhere was quoted by Chinese state media including People’s Daily, and Global Times.

IS THE CHINESE GOVERNMENT INVOLVED? With all that elaborate censorship, does anything happen in China without the knowledge of Xi Jinping? Well we don’t know; neither does Meta or Twitter.

However, governments like that of China or Russia are known to use proxy media such as anonymous or fake social media accounts to run misinformation campaigns.

This is not the first time China has been called out for spreading large-scale misinformation in the West. Earlier, a misinformation network on Covid-19 vaccine was traced back to China and Russia.

Rand Corporation in a study also claimed that China is expanding its misinformation campaign in new languages.

Historically, Russia has been known for leading misinformation campaigns, and China is more associated with data theft. However, it seems like China is also using Russia's tactics to undermine the social order of other countries.

In today's digitised world, information is gold. So, the next time you click on that link, spare a glance at where you consume your 'news' from.

#Twitter, #Meta, #Facebook, #Misinformationcampaign
The views and opinions expressed in this article are those of the authors and do not necessarily reflect the official policy or position of DailyO.in or the India Today Group. The writers are solely responsible for any claims arising out of the contents of this article.