WhatsApp, the world's biggest instant messaging platform, and now, India's preferred medium for spreading fake news, has been getting a lot of flak lately. Over the past months, hoax messages circulated using the platform have more often than not managed to take a life and triggered many shameful incidents of mob lynchings.

Earlier this month, Mohammad Azam, a resident of Hyderabad, was attacked over child lifting rumours by a frenzied mob of around 200 people while he was traveling to Karnataka's Bidar district along with three of his friends – Salham Eidal Kubaisi, Noor Mohammed and Mohammed Salam.

Though his friends were lucky enough to escape with only physical and psychological scars, Azam lost his life to the fake news-induced attack. However, the particular incident of mob lynching, although shameful for any mature democracy, doesn't appear to be an anomaly for the world's biggest one. Over the past weeks, such attacks have only become more frequent and appear to be carried out with far greater impunity than before.

As per media reports, the situation has deteriorated to such an extent that more than two dozen such cases of lynchings related to child abduction have been reported in the last two months alone.

Earlier this month, a resident of Mangaluru was thrashed by a mob while he was out on the streets with his two-year-old daughter. While ironically in Tripura, a man hired by the government to dispel WhatsApp rumours about child lifting was beaten to death on June 28.

The common link in all these cases is WhatsApp. With 200 million monthly active users, India is the biggest market for WhatsApp and as such, it is crucial to the messaging platform – and its parent firm Facebook's – plans for the future.

However, with its name emerging as the common link behind such cases – more of which can be expected in the run-up to the 2019 Lok Sabha polls – and the Narendra Modi-led NDA government ordering WhatsApp to act immediately to curb the spread of fake news, Mark Zuckerberg and co have been pushed into panic mode to find a 'fix' to the situation.

Forced to acknowledge the problem, the Facebook-owned messaging platform has responded by terming the "terrible acts of violence" as "horrible" and has promised to take immediate action to curb the spread of fake news.

It recently published a full-page advertisement in leading Indian newspapers, advising users on how to identify fake news. The ad as published in English dailies starts with: “Together we can fight false information” and then goes on to list 10 tips on how to spot fake news.

Listing basic steps, such as verifying shared information with other sources, to asking users to closely check videos and pictures before believing in them, the ad asks users to think twice before trusting forwarded content. “Fake news often goes viral... Just because a message is shared many times does not make it true.” 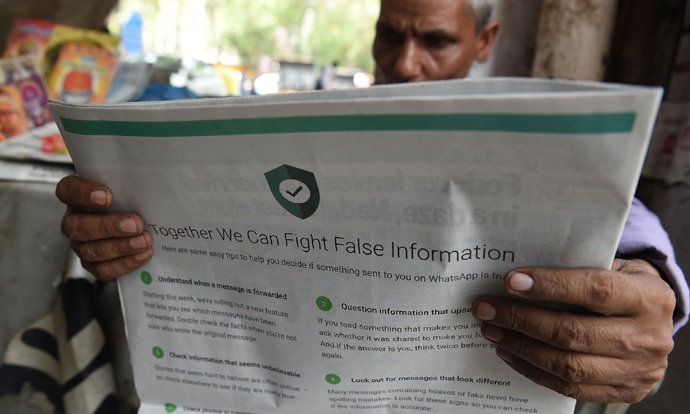 Putting out necessary information on fake news. But is this enough? (Photo: AP)

With India seeing more forwards – messages, photos, videos – than anywhere else in the world, WhatsApp has identified the tool as the main cause for concern. In an official blog post published on July 10, WhatsApp informed its users that it was adding a “Forwarded” label on messages that were being mass-shared by users. It also gave the power to group admins to decide whether all participants or only admins can send messages on a group.

And earlier today, it announced more India-centric alterations to the feature. While the company has announced “launching a test to limit forwarding” by setting a cap of 20 shares for its various markets across the globe, for India, however, the company is testing a significantly "lower limit” – allowing users to only forward a message to up to 5 chats at one time.

Further, the company has also announced the removal of the "quick forward button” which allowed users to directly forward a message from within a chat with the click of a single button.

As WhatsApp explains in the blog post, "it believes that these changes will help keep the platform the way it was designed to be: a private messaging app."

But will these steps be enough? No. Much more needs to be done

There is no denying that WhatsApp is taking the problem at hand quite seriously. Case in point, the messaging platform announcing three rounds of feature updates in the last three weeks as opposed to the same number in the first six months of the year.

However, what also cannot be denied is that proposed changes are nowhere close to being enough to what is needed to tackle the situation at hand.

With the 2019 Lok Sabha elections around the corner, and fake news likely to become a bigger problem, the proposed steps at best will only act as deterrents and not as actual roadblocks that curb the spread of fake news.

The new steps will only make forwarding content more cumbersome – but they will do little to stop those who are looking to use false information to pit one against the other in a bid to further their agenda.

And that is the big problem.

With the situation getting out of hand, what is needed is a mechanism that can effectively filter messages in real-time and fix accountability to those who are actually spreading fake news. A mechanism that can delete objectionable content from across the platform before it turns into a sinister viral message.

However, for a messaging platform, with no less than 1.5 billion active monthly users globally, such a real-time filter mechanism would not only be very difficult to implement, but more importantly, it will also raise serious privacy concerns.

To bring into effect a mechanism that sifts through private messages – texts, images, videos – of its users would not only see WhatsApp breaking the promise of safe and secure encrypted data transfer, but would also open it to the ire of the very user the company will try to protect with any such move. Having said that, there are still steps the messaging platform can take to fight the growing menace. Though continued real-time scanning of messages being shared across the platform may not really be an option, WhatsApp could still add functionalities that allow users to flag messages they deem to be offensive or containing fake news.

On receiving a high number of complaints about a particular viral message, the company can verify the content, and then use a machine learning tool to stop the particular message from being shared further on the platform.

The platform can also take similar measures to the ones it took to stop the spread of fake news during elections in Brazil and Mexico. As per a report published in The Economic Times, the latter could actually come true, with WhatsApp already in talks with the Election Commission (EC) to bring the Verificado model to India."Verificado was a collective fact-checking exercise deployed by WhatsApp during recent Mexican elections. The messaging service is undertaking a similar exercise in Brazil, where 24 media outlets have come together to fact-check viral content and rumours."

As per the report, the messaging service is currently discussing with the EC the possibility of using machine learning-powered spam filtering techniques in the run-up to state polls scheduled for 2018-end. The Verificado measure, however, would only come into effect "from the time the model code of conduct kicks in, and especially 48 hours before polling."

But with WhatsApp already identified as the tool of choice to divide people along the lines of ideology, caste and religion, the question still remains. Are these measures being taken a little too late?