Genetically modified, so what?

Producing GM crops is not a grossly unnatural thing to do.

The debate on Genetically Modified (GM) crops doesn’t appear to be dying soon. The letter written by 109 Nobel laureates to Greenpeace this summer is not enough for many of our NGOs. An activist termed the letter by the laureates as a "mere opinion".

Surely, but so is true of the protesters – they simply have an opinion and no proof. The only difference, however, is that the former group is more well known and well read in the art that they practice. The others practice a different art; noise and cacophony cannot replace hard core scientific work done over decades by people like Deepak Pental on crops like mustard.

Most of those opposing GM crops believe that that these crops are not natural. There is no disagreement with the assertion that GM crops are not traditional, but they are as natural as any crop could be, sans the human mediation and speeding up of the production process. These are the same genetical and biotechnological processes, which most of us applaud when it comes to producing medicine and addressing healthcare products.

Sadly, a number of the protestors have little idea of how for over thousands of years humans have domesticated crops and selected the ones they found more useful. It is an entirely different story that the loss of wide genetic diversity of crop plants has a downside, but GM crops have had little to contribute there.

The long and short of it is that we must leave these things to the experts and not be led by the ignorance of some dissenting voices. Though it must be said, some of them feign ignorance and some may genuinely apprehend something terrible. We can live with that.

The stance of some hardline groups against GM crops, therefore, needs to be addressed dispassionately.

Is producing GM crops a grossly unnatural thing to do? The simple answer is no.

An undergraduate student of biology will tell us that the common bread wheat that we eat as staple diet has not one, but three genomes (not one or two genes) contributed by different species of wild grasses.

So the common wheat, in a sense, is a classical case of naturally evolved GM crop. Of course, it may have taken several thousand years to be perfected. The only difference here is the augmented human capability of shortening the cycles of incorporation of foreign genes. 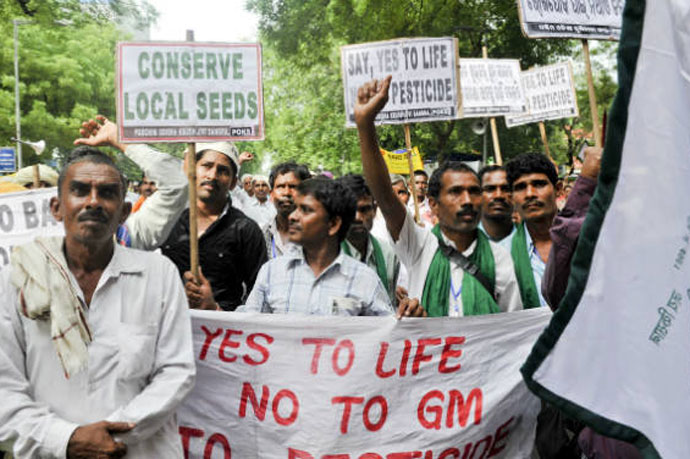 A number of protestors have little idea of how for over thousands of years humans have domesticated crops. (Photo: Greenpeace)

It is akin to the shortened travel time - evolving from bullock-cart transport mode to the airplane. One could argue that since airplanes guzzle lot of gas and contribute to air pollution, we need to ban airplanes and the stray air accidents do not prevent even those in opposition of GM crops to give up travelling by air.

There are, however, sociological and economic issues of farmers, which the Indian government cannot and should not ignore. The policy formulation would most definitely factor in such concerns.

For instance, the terminator gene technology- a specific gene sequence artificially inserted by researchers into a plant’s genetic material - makes the crop seed sterile, which makes a farmer perpetually dependent on the company that provides the GM seed.

The minister in charge of issuing clearance to such technologies must be prepared to listen to the concerns of the vast majority of Indian farmers. Instead of addressing economic difficulties related to the acceptance and vast benefits of the technology, we should not blame the technology. That would be poor and even irresponsible thinking.

Apart from the socio-economic issues there are ecological concerns regarding widespread cultivation of GM crops. These include unintentional targeting of other species like insects which could be eliminated when they feed on such crops. Vanishing of these non-target species will lead to loss of a variety of ecosystem services mankind receives from them as pollinators of other economically important agricultural and horticultural crops.

Additionally, genes from GM crops could escape and get transported to related species, turning them into noxious weeds due to their accidental acquiring of resistance to natural herbivores with undesirable ecological and economic impacts.

That said, such events are not uncommon in the natural plant world. A large number of accidental introductions of weeds and natural hybridisation between an exotic species and a native one could result in severe economic and ecological consequences.

The congress grass (Parthenium hysterophorous), a weed that has heavily infested large parts of the Indian subcontinent, makes more people sick each year due to respiratory allergies than a GM crop perhaps could.

What are the exigencies that justify production of GM crops? The following points merit our consideration. The projected world population estimate touching over nine billion people by 2050 poses a serious challenge to our capacity of feeding these staggering human numbers.

Notably, most of this population lives in developing nations, especially India and China, besides the African region. Most of these nations are limited by the population-agricultural land asymmetry; the most populous and poor nations have much less proportion of arable land than the richer nations.

In view of the burgeoning human numbers and limited crop land, conventional methods of crop production would mean further land use conversions - cutting down the last remaining forests for agriculture. The land use changes from natural to managed systems drive loss of biodiversity besides serious hydrological consequences (floods). Therefore, use of advanced crop production technologies such as GM crops can help alleviate the problem of habitat destruction and biodiversity loss.

The world, therefore, can afford to spare larger natural areas for conservation. Likewise, there is evidence that introduction of GM crops in different regions has led to the reduction of about 500 million kilograms of pesticides in over a decade. India must be deeply interested in saving human lives through reducing pesticide use.

We know for sure that a large number of incurable diseases such as cancer are caused by overuse of pesticides and insecticides. We have little proof that GM crops do any such thing; in fact they may help reduce use of such chemicals getting into our food.

On a larger rational point, why do we not protest when we consume "foreign chemical substances" in the form of medicines with known side effects, on a daily basis? Why do we accept heart surgeries and kidney transplants as a norm?

None of these are natural manoeuvres. Do we have double standards when it comes to our individual lives and that of the larger human community?

Also read: How Monsanto is getting away with looting India's farmers

#Farming, #GM Crops
The views and opinions expressed in this article are those of the authors and do not necessarily reflect the official policy or position of DailyO.in or the India Today Group. The writers are solely responsible for any claims arising out of the contents of this article.

The writer is Professor and Radcliffe Fellow at Harvard University.