With arguably the best camera on a smartphone, the new Pixel devices aren't just for enthusiasts anymore.

Mountview-based tech giant, Google, at an event late on October 4 announced 2017's "Made by Google" family of devices that included a high-end premium Pixelbook, two new Google Home speakers, smart earbuds that can translate words into multiple languages, a hands-free camera, and a new VR headset. However, the showstopper undoubtedly was the unveiling of the new Pixel smartphones.

Amid much fanfare, the base storage variants of the Pixel 2 was announced in San Fransico starting at $649 and going all the way up to $849 for the Pixel 2 XL. Both these phones can be upgraded to the 128GB variant by adding $100. The phones were also announced for the Indian market, but as is the case with most smartphones and gadgets, the price tags of the Pixel 2 phones will get considerably swollen by the time they make it across to the Indian shores.

Pre-orders for both the devices will commence later this month – October 26 –  but the phones will go on sale starting November 1 (Pixel 2) and November 15 (Pixel 2 XL). Apart from being available through brick and mortar stores, the phones will also be available on e-commerce platform, Flipkart.

Wondering when the Pixel 2 will reach India? *drumroll*All the deets you need are right here. #madebygoogle pic.twitter.com/YTFAqm6qcj

But before you decide on splurging on either of the two devices, read on to know if they indeed are worth your money.

When it comes to the design, the Pixel 2 phones build on the design elements from the first generation devices. Much like last year, the phone's design style has been kept clean and simple. In terms of overall looks, the Pixel 2 phones don't compare to the flashiness of the HTC U11 or wow you like the Galaxy S8 or the iPhone X does, but they stand out from the crowd with their non-expressive frames that have been crafted using aluminum and glass on the back.

On paper, The Pixel 2 is available in three colours – Blue, Black, and White – while its heftier sibling, the Pixel 2 XL is available in white and black. However, it's not as simple as it sounds. Much like last year, both the phones follow a two-tone colour scheme where the base colour is repeated on the top of the phone using a glass shade of the same colour. This is particularly pronounced in the white colour version of the Pixel 2 XL which comes with a black shade on the camera lens area making it look like a stormtrooper communication device. 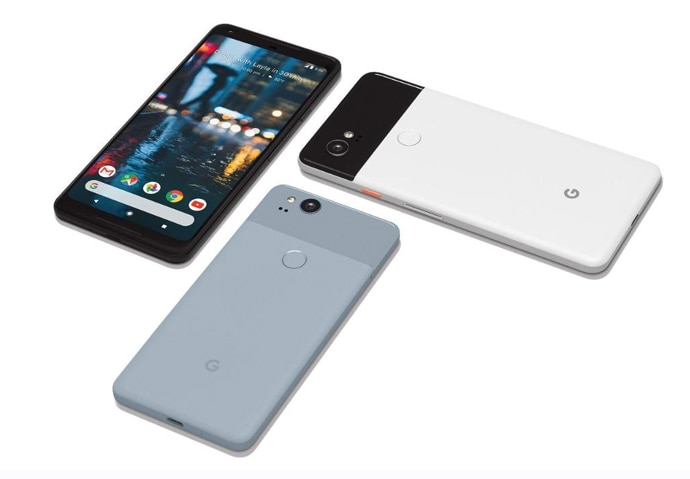 The two phones also house funky looking power buttons which Google claims adds to the phone's "playfullness". However, this "playfullness" may not work for everyone, and might even be a deal breaker for some.

At the front, the Pixel 2 comes bearing a bezel ridden 5-inch 1080p AMOLED display that melts into the Almunium frame of the phone, while the Pixel 2 XL sports 6-inch 2880 x 1440 (QHD) pOLED display that has considerably thinner bezels for a more modern edge-to-edge feel. For all its claims of keeping the two phones similar, this choice definitely gives the Pixel 2 XL an unfair design advantage over the Pixel 2, thus making it the much better-looking phone.

But overall, from the inclusion of sturdier and much easier to grip aluminum in favour of glass at the back, to the addition of bezels in the front to house front-facing stereo speakers, the latest Pixel devices have clearly been designed with keeping practicality in mind. 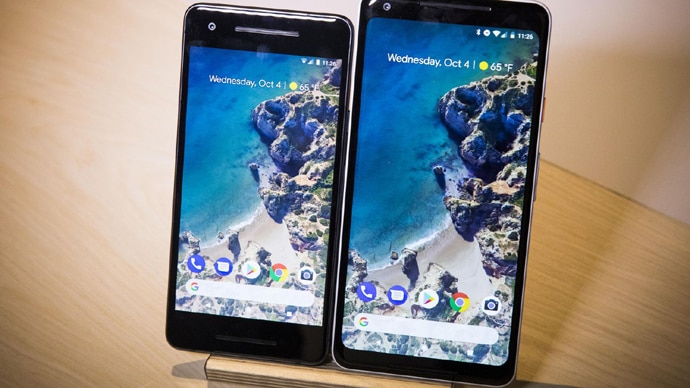 What's under the hood?

As Google explained at the launch event, the Pixel 2 and Pixel 2 XL are cut from the same cloth, and as such, Google has used similar technology and internals to create both the phones. Apart from a larger battery pack – 3520mAh in comparison to the 2700mAh found on the Pixel 2 – all other internal specs are shared between the two phones.

Running the show on these devices is Qualcomm's top-of-the-line 835 SoC – instead of the rumoured 836 SoC – paired with 4GB RAM and 64GB or 128GB storage.

With love from a company built on questions. Ask more of your phone. https://t.co/K7MJ0ESyCv #madebygoogle pic.twitter.com/oW7Nltigq3

Arguably the best camera in the market

With an overall DxOMark Mobile score of 89, the Pixel line-up from 2016 boasted of being among the highest-rated camera smartphones launched last year. Software optimisations paired with an above par 12.3-Megapixel single lens shooter enabled the phone to click great pictures.

However, the camera was still not flawless.

In the new phones, Google has added optical and electronic image stablisation technology on the rear camera to make it arguably the best camera setup available in the market. Faced with a sea of dual camera modules, Google has chosen to go ahead with single camera setup consisting of a 12.2-Megapixel f/1.8 aperture lens with autofocus along with laser and dual-pixel phase detection. However, that's partly because the lens used on the Pixel 2 is a dual-pixel sensor.

From the initial reviews, the gamble looks to have paid off, with DxOMark giving it a rating of 98 – the highest for a camera setup on a phone. In comparison, Samsung's Note 8 and the iPhone 8 Plus – both featuring dual camera setups – currently lie joint second with a DxOMark score of 94.

There's also a more than capable 8-Megapixel f/2.4 aperture lens with fixed focus in the front for clicking selfies. Google has said that both the front and the back cameras have been equipped with technology to help them capture "high-quality portrait shots with the perfect background blurs, from both the front and back camera." Sample shot clicked from the Pixel 2 XL provided by Google.

What so cool about the phones?

Well, this is where things start to get interesting. Though the devices don't come packing anything out of the ordinary in terms of specs, it does shine through in the seamless integration of Google's core strengths in Machine Learning and AI with the hardware available at hand.

The new Pixel devices provide a deep level of integration with hardware available at hand, results of which can be seen in Google Lens and Google Assistant working on the two phones.

Google here plays to its strengths, and uses the vast data it collects to help users identify landmarks, books, music albums, movies, and artwork, by simply pointing their camera's lens at them. Google Lens can also be used to copy URLs and contact info from a picture of a poster or business card.

Google has also equipped this phone with the ARCore framework which can be used to use moving "stickers" in real time scenarios.

Another cool feature that has made way to the Pixel 2 phones – possibly as a result of Google recently buying a wing of the HTC's smartphone unit – is the inclusion of a "squeezable frame" on the phones which can help users fire up the Google Assistant by gently squeezing the body of the phone. As was seen in the case of the HTC U11 – the smartphone which first debuted this feature – this still looks to be more of a gimmick and can take some time getting used to without providing much in the way of real-world usage.

However, that's not where the gimmicks end. Google has also given the Pixel 2 phones the ability to ambiently identify music. With this nifty trick, the microphone on the devices will always be on the lookout for music that is playing in the background, results of which will be displayed on the always-on lock screen of the phone.

"We want to bring lens everywhere, we're starting with a preview on Pixel 2" @madebygoogle pic.twitter.com/mgqF6dvucs

How does it compare to the competition?

As is with most things, the answer to this depends on what you're looking for. The 2017 Google Pixel devices with their classy designs and clean stock Android UI are built for business. In line with Google's vision for the Pixel devices, everything about the phones screams of practicality and pragmatism.

Unlike the iPhone X or the HTC U11, the design here simple and is sleek and may not turn heads but it will work for everyone. However, it's the internals – hardware and the UI – where the new Pixel steals a march over its competition. Great camera's clean stock UI and the promise of a Google-branded phone with a deep level of OS integration with the hardware make this a device not just for the enthusiast, but also for an end user looking for a premium no-frills Android phone.

Given it is not exactly cheap, but it still looks favourable when compared to the iPhone X. And faced with the competition from other premium Android flagships like Galaxy S8 and Note 8, it offers just about enough in terms of end result to make it a worth your money.

Also read: Why Dalits in Gujarat are protesting by twirling their moustache

#Pixel 2, #Google, #Review, #Android
The views and opinions expressed in this article are those of the authors and do not necessarily reflect the official policy or position of DailyO.in or the India Today Group. The writers are solely responsible for any claims arising out of the contents of this article.