Yuck - why you shouldn't use hand dryers in public washrooms

A recent study suggests they are extremely unhygienic as they suck in bacteria from flushing toilets and spread them on to the user's hand.

For long we've been made to believe that using a hand dryer in a public washroom is not only the most eco-friendly, but the most hygienic option as well. Well, looks like that's not the case.

According to a study published in the Journal of Applied Microbiology, hand dryers are far worse at spreading bacteria than paper towels. That's not all, because of the air, the viruses can spread about 10 feet on every use of the hand dryers. The research explains that these hand dryers found in public washrooms do so by sucking in bacteria from the surroundings, such as flushing toilets and disperse them on to your hands once you use them.

This study, which was originally published in 2015, and was later updated in May 2016, with updated findings failing to gain major traction for almost two years. But that changed when a microbiology student, Nichole Ward, conducted a little science experiment in a public bathroom and shared her findings on Facebook for all to see.

The post first shared on January 31 right now has over 550k shares, and many more likes and comments.

In the post, Ward explains how she put a Petri dish under a hand dryer in a public bathroom for a period of three minutes and later left the petri dish for the cultivation of microoganisms. Though a certain amount of bacteria and other microorganism are bound to grow under any circumstance, but as she found the petri dish from the hand dryer when left for three days showed an alarming amount of microorganism growth.

"This here, is what grew in a Petri dish after just a few days. I stuck the open plate in an enclosed hand dryer of a public bathroom for a total of three minutes. Yes three only."

In an accompanying photo, the Petri dish used at the hand dryer is shown to be filled with multiple strains of fungi growth.

In her post, she claimed that the aim of the post was to "spread awareness". She added, "This is the several strains of possible pathogenic fungi and bacteria that you’re swirling around your hands, and you think you’re walking out with clean hands. You’re welcome." 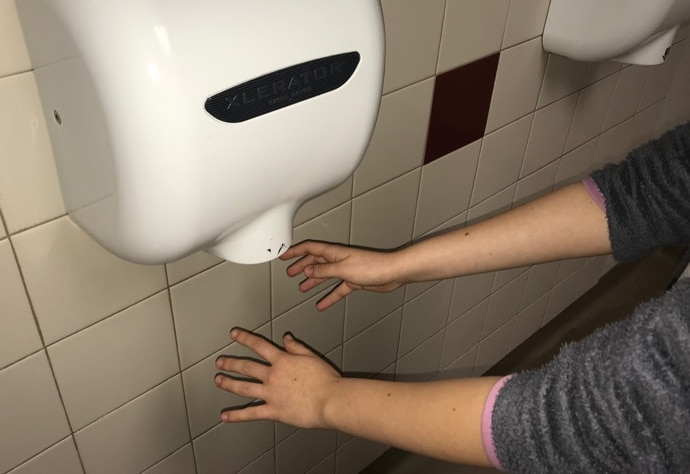 However, her post has been branded by hand dryer manufacturers as an attempt at fear-mongering. Speaking to ABC news, a spokesperson for Dyson, the manufacturer of the hand dryer she used, said it was "very surprised to see these results, and unclear on the methodology employed".

However, this statement by Dyson uses exactly the same template as the one it issued after The Journal of Applied Microbiology published its report in 2016 claiming that jet air dryers - high-powered machines like the ones from Dyson - contaminated the surrounding area with 1,300 times as many viral particles as a paper towels, while standard hand dryers - those that simply blow warm air - spread far fewer particles, but still 60 times as many as a paper towel.

Dyson at that time too had raised questions over the condition that the tests had been conducted under.