It has created 230 labs across India for engineering students to come up with solutions to local issues.

Professor Kavi Arya, who teaches computer science and engineering at IIT Bombay, couldn't have been more delighted when a team of his colleagues and students developed a multipurpose compact weather station last year using a palm-sized robot.

The weather station is an achievement as it is a first-of-its-kind innovation which has not only proved to be efficient in various applications, but also reduced usage cost by around 90 per cent and has ended India’s dependency on import of machinery.

The weather station which comprises a robot and a simple ruggedised laptop, can be carried in a sack. With a production cost of Rs 30 lakh it has already become a hit in defence sector as well as the meteorological department. Earlier, India needed to import parts of the weather station and required a designated truck to carry the device which combined cost it around Rs 3 crore per device.

Low-cost, efficient technology has become the IIT’s motto ever since it launched five years ago an initiative e-Yantra in which engineering students are encouraged to develop technology to solve day-to-day problems. “We provide students with a problem inspired from the real world which they solve using a robot that we supply them,” says Arya. “Their job is to devise a machine using the robot to solve a problem.”

No wonder students as well as teachers in 230 laboratories, launched by the IIT, in small towns such as Ichalkaranji in Maharashtra and Sivakasi in Tamil Nadu are busy devising machines.

In Ichalkaranji, a textile hub, they are developing a device which can transport cotton spindles from one place to another. 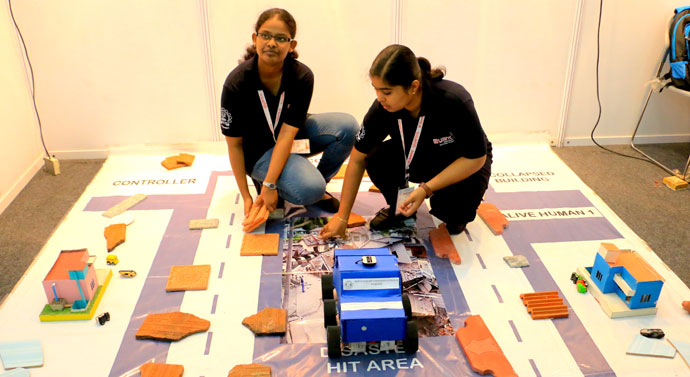 Low-cost, efficient technology has become the IIT’s motto ever since it launched five years ago an initiative e-Yantra. (Credit: www.e-yantra.org).

In Sivakasi, the well-known fireworks hub, they are developing a machine which can detect room temperature in the factory and sound an alarm when the temperature rises in an attempt to prevent occasional fire.

But nothing was possible without a coordinated team work.

It began in 2009 with a course project in an a postgraduate Embedded Systems course at the IIT. The students take real world problems and build prototype systems to solve them using automation. One such project was to build a radiosonde device (perhaps for import substitution) weighing some 150 gm that is essentially a mini-weather station. It is sent up into the atmosphere tied to a hydrogen-filled weather balloon to relay back radio data about temperature, pressure, humidity and wind speed.

The uses of this weather station are numerous. The experts in meteorological observatories use it to sound weather conditions. The ISRO uses radiosondes to sound the atmosphere before launching rockets and missiles. This has numerous applications in several defence spheres. The imported device they chose to replace cost roughly Rs 20,000 a piece and is a consumable. Various government agencies use thousands of these devices every year — costing a fair amount of foreign exchange.

“This was the start of an adventure and a deep-learning experience,” says Arya.

His next aim is to “Make in India” with students. He says it is cheaper than other options. The other advantage is they can train high-quality manpower and most importantly create invaluable intellectual property (IP). “When we have access to IP, we may continue to improve a product over time. Each of our MTech students that have worked on such a project have got placed in R&D units of highly respected companies,” Arya points out.

He also looks at it as an opportunity to create entrepreneurs. “The prime benefit of having access to IP is the possibility of local innovation and startups enriching the economy and possibly competing in global markets. So it is not a question of whether our growing economy can afford to Make in India, but whether we can afford not to in these highly competitive times.”

#Students, #Robots, #IIT-Bombay
The views and opinions expressed in this article are those of the authors and do not necessarily reflect the official policy or position of DailyO.in or the India Today Group. The writers are solely responsible for any claims arising out of the contents of this article.