Metaverse is brimming with updates. 6 new things you can do in it

Metaverse is brimming with updates and here's our roundup of the same.

Metaverse, the 3D version of the internet, is getting upgrades faster than we can imagine. With weddings moving from Zoom to Anime, companies are working 24*7 to create fantasy imagination into reality.

Here are 6 new things you can do in the metaverse:

Humanoid robot Sophia, who has created records by speaking at the United Nations, having Saudi citizenship, and being on the cover of Cosmopolitan India, will set another record by entering the metaverse for a project called 'Noah's Ark'. She will enter the metaverse with an anime version of herself, named 'Sophia beingAI', and beingAI will help launch the same.

Being AI is set to launch 100 intelligent non-fungible tokens (NFTs) between December 16 and 21. 20 NFTs are being auctioned each day over a 5-day event. The collection is called ‘The Transmedia Universe of Sophia beingAI’ and will feature on Binance’s NFT marketplace. Here's a video interaction launched by beingAI on YouTube.

2. ONERARE LAUNCHES THE FIRST EVER FOODVERSE

Supreet Raju, has created a new metaverse for food, called Foodverse. A food metaverse would be a place to celebrate food in all its forms and would consist of 4 elements:

This is meant to encourage more people to join the metaverse, encourage more gamers and foodies to hang out, and also for celeb chefs like Reynold Poernomo of Masterchef Australia (famous for creating incredible desserts with 50+ ingredients) to create more dishes and interact with people.

Questions to ask on a first date: Are you a cookie person? ?That’s it, that was our list. Does anything else really matter?#OneRare #CookieDay #NFT #Cookies #Metaverse #PlayToEarn $ORARE pic.twitter.com/pyx8MRZ0dJ

The Metaflower Super Mega Yacht is a digital NFT yacht and was sold for 149 Ether in Sandbox, which is a virtual world where players can build, own and monetise their gaming experience. The yacht is a part of "The Fantasy Islands", which is a self-described "luxury real estate development project of 100 NFT private islands (comprised of NFT land in the Sandbox + architecturally unique 3D NFT villas)".

This will be created on the Ethereum blockchain and what will the owner enjoy? A DJ booth, helicopter landing pad, and hot tub. Its details are available for everyone to watch. This is what it will look like:

Get ready for some eye-popping real estate deals that the metaverse has been seeing these days. Projects like Decentraland, Sandbox are providing virtual land for sale and investors are flocking in to trade in virtual land units which are also considered NFTs. The deal is similar to the one in the physical world - the owner owns the rights to the virtual land and can do anything on it: rent it, create an advertisement board and rent that, create a monument, whatever. As if buying property in real world isn't tough, there is a new variety of choice in the metaverse!

convince me this is not an easy choice. #wilderworld; #Sandbox ; #Decentraland pic.twitter.com/7GZjnpKBuW 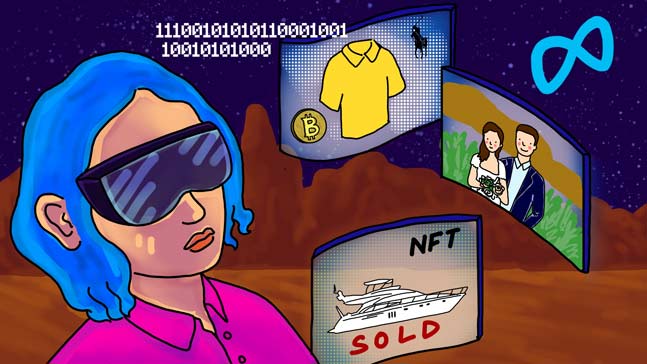 5. GETTING MARRIED IN THE METAVERSE

Yes, someone got married in the metaverse. Apparently, a free game called "Final Fantasy XIV" allows users to get married, and the couple gets a ring which allows free transportation to the event once a day. If you pay, you can get a fancier location and more frequent trips. You can also get a range of formalwear to choose for your wedding. We wonder what they do for honeymoon...

Seems like some people who got married in real life coudn't digest the news:

Final Fantasy XIV sitting over here being like "Good for the Metaverse? We did this fucking years ago."Heck, I married @Cenauru in it. And still have the ring and outfit. :3 https://t.co/Sfn5C7pIJ7

#RalphLauren is pitching popped collars and sundresses to a new generation of #avatars as the iconic clothing brand moves into selling #digital apparel inside of the #metaverse.Ralph Lauren Is Now Selling #DigitalApparel For Avatars Inside Of #Zepeto https://t.co/HxYL9nzpA7 pic.twitter.com/wCCEM3dGzu

Ralph Lauren Winter Scape is a virtual experience replete with digital Ralph Lauren garments and holiday activities like Treasure Hunt that will be open till January 3, 2022. The intention is to lead the digital space and engage with customers on the platform. The company will track it's growth by using metrics like user engagement, time spent by users in gaming, and units of digital goods sold on the metaverse. Ralph Lauren tweeted this:

Iceland Tourism created a fun video on the lines of Mark Zuckerberg's Meta reveal video, and invited viewers to the real-life "Icelandverse" instead. The actor here was dressed like Mark and was called 'Zack Mosbergsson', the Chief Visionary of Icelandverse. The video is a total mockery of Metaverse - right from how it allows people to connect in a place which already exists (i.e Iceland) without being super weird, to being in an actual reality without silly-looking headsets. The actor tries to mimick Mark's postures (and fails to do so which is fabulous because it shows how orchestrated Mark's one-hour talk was), and takes a dig at Mark's recent viral post about sunscreen. After this was launched, Zuckerberg even replied to the fun video which was posted from the Inspired by Iceland account:

Our very own Zack Mossbergsson even managed to convince his friend Mark Zuckerberg on Facebook to enter the #Icelandverse! Yes, really! pic.twitter.com/9D4EeALqsi

So, which one caught your interest?

#Nft, #Virtual real estate, #Decentraland, #Ralph lauren
The views and opinions expressed in this article are those of the authors and do not necessarily reflect the official policy or position of DailyO.in or the India Today Group. The writers are solely responsible for any claims arising out of the contents of this article.