Gold rush in the sky: Two neutron stars colliding is proof of alchemy

LIGO has detected a 'kilonova' about 130 million lightyears from Earth and the result is just spectacular.

While we ghosts “driving a meat-coated skeleton made from stardust” continue to bicker on the little landmass we can find on the third rock from the sun, the cosmos continues to function in ways that range from unimaginable to unfathomable. Sometimes however, we accidentally do get to witness the magic of things in the unending space that lies beyond our tiny blue planet. This is one of those times we got lucky.

As per reports, the US-based Laser Interferometer Gravitational-Wave Observatory (LIGO), picked up something quite extraordinary: the collision of a pair of neutron stars that caused ripples through the fabric of space-time and “a flash brighter than a billion suns”. 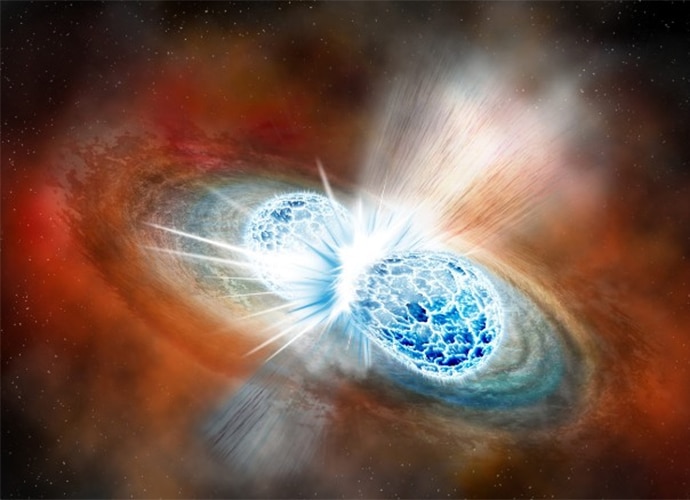 The collision known as a “kilonova” took place 130 million lightyears from Earth, in the galaxy NGC 4993, in the southern constellation of Hydra. The collision sent a barrage of gravitational waves, x-rays, gamma-rays, radio waves, and light waves towards us. If the ramifications of this massive event are not clear, think of it this way – two ultra-dense stars spiralled inwards, collided against each other with such force that cannot be imagined, and, in all likelihood, collapsed into a black hole.

Picture this: Two stars with masses as great as the sun packed into a region the size of Manhattan brimming with magnetic and gravitational fields collided at nearly the speed of light; exploded and died. Initially separated by 200 miles, the two ultra-dense stars circled each other 30 times a second. Then, they whirled inwards, accelerating to 2,000 orbits each second, the signal – as captured by the twin detectors in Louisiana and Washington – rose in pitch like a slide whistle.

After two seconds, Nasa’s Fermi space telescope picked up an intense burst of gamma rays, emitted as shockwaves rushed through jets of matter funnelled out of the poles during the monumental impact of the collision.

Alchemy, the medieval forerunner of chemistry, was attempted by many with the intention of converting base metals into gold. But you don’t need to be Nicholas Flamel or possess the philosopher’s stone to witness the formation of gold. Because there's gold rush in the skies.

The collision of the two neutron stars has been found to be the source of heavy elements such as gold and platinum. Of course, astronomers have long suspected this.

"That debris is strange stuff. It's gold and platinum, but it's mixed in with what you'd call just regular radioactive waste, and there's this big radioactive waste cloud that just starts mushrooming out from the merger site. It starts out small, about the size of a small city, but it's moving so fast — a few tenths of the speed of light — that after a day it's a cloud the size of the solar system", Kasen said.

"It's a ridiculously huge amount on human scales. It's crazy to think that these things that seem very far out and kind of exotic actually impact the world and us in kind of intimate ways", he added.

Earlier this month, three US scientists who played a crucial role in the development of LIGO were awarded the Nobel Prize in physics for the first detection of gravitational waves.

Dave Reitze, executive director of LIGO, said: “What is amazing about this discovery is it is the first time we’ve got a full picture of one of the most violent, cataclysmic events in the universe. This is the most intense observational campaign there has ever been.”

Of course, it was Albert Einstein, the German-born theoretical physicist who enlightened the world with his theory of relativity, who first predicted the existence of gravitational waves a century ago.

According to a Guardian report, a neutron star weighing more than twice the mass of the has never been seen before. Neither has a black hole so small. Theoretical predictions suggest an almost instantaneous gravitational collapse into a black hole is most likely.

“Neutron stars are at this sweet spot between a star and a black hole,” said Prof Andreas Freise, a Ligo project scientist at the University of Birmingham. “When two of them collide, we expect them to immediately collapse into a black hole, leaving behind a bit of dust and stuff.”

David Shoemaker, spokesman for the Ligo Scientific Collaboration, said: “It’s [probably] the first observation of a black hole being created where there was none before, which is pretty darn cool.”