5 ways Stephen Hawking changed our world with a bang

Born in Oxford on January 8, 1942, the famous physicist died peacefully at his Cambridge home, at age 76.

As the world woke up today, it did so to the sad news of losing one of its most brilliant minds. On March 14, 2018, renowned theoretical physicist, Stephen William Hawking, died at the age of 76, at his Cambridge home.

In a statement issued by his family, his children Lucy, Robert and Tim said they were deeply saddened by their father's passing. They added, "He was a great scientist and an extraordinary man whose work and legacy will live on for many years. His courage and persistence with his brilliance and humour inspired people across the world."

It would not be an exaggeration to say that these words echo the sentiments of millions across the globe. And why so? The answer to it lies in his life story, which was riddled with obstacles that he invariably overcame to achieve what was thought impossible — and beyond his control. Diagnosed with Amyotrophic Lateral Sclerosis (ALS) at the age of 21, for much of his life, Hawking was forced to use a wheelchair and dependent on a computerised voice system to communicate.

However, it did not stop him from earning countless honours for his work as a theoretical physicist and his contributions to the fields of cosmology, general relativity and quantum gravity –  especially in the context of black holes – which continue to shape our understanding of the universe. Arguably, his most notable achievement in the field of theoretical physics is his work on singularities. Along with fellow scientist Roger Penrose, Hawking proved that Einstein's theory of general relativity allowed for gravitational singularities. A gravitational singularity is a one-dimensional point that contains infinite mass in an infinitely small space, one where space and time appear to be infinitely curved and the laws of physics, as we know them, cease to exist.

This pathbreaking work on singularities in 1970 helped Hawking and Penrose give theoretical proof that the universe as we know it must have begun as a singularity or with the Big Bang, as it is more commonly known.

Working alongside James Bardeen and Brandon Carter, Hawking helped frame the four basic laws that govern the mechanics inside a black hole. These laws, which mirror the more familiar laws of thermodynamics, were theorised in January 1971 after which his essay titled “Black Holes” won the prestigious Gravity Research Foundation Award.

In one of these laws, known as the Hawking area theorem, he theorised that the total surface area of a black hole never does reduce. The law turned classical physics on its head and claimed that black holes were hot as opposed to the assertion that black holes could not radiate heat.

In 1974, Stephen Hawking took his work on black holes forward and came up with a controversial theory, the Hawking radiation. The theory went against laws of classical physics which, for long, believed that nothing escapes a black hole, not even heat.

With his theory, the theoretical physicist showed that black holes emit radiation, and continue doing so till they exhaust their energy and eventually evaporate. He theorised that towards the end of their lives a black hole must release great amount of energy and in the last tenth of a second, a black hole could explode with the energy of a million one megaton hydrogen bombs. 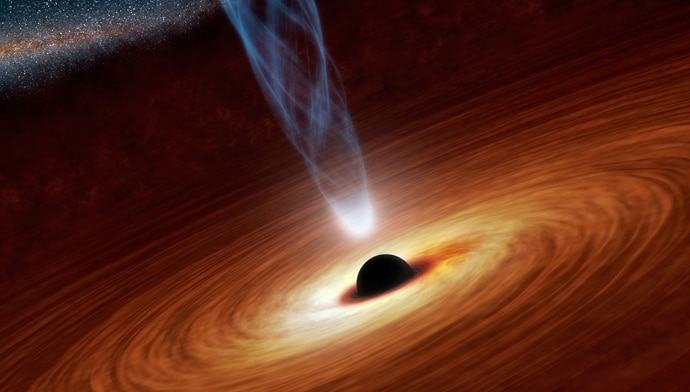 Contribution to the theory of cosmic inflation

During the '80s, Hawking devoted much of his time to contributing to Alan Guth's theory of cosmic inflation. Guth's theory is central to understanding the origins of the universe as it explains how, by following the Big Bang, the universe expanded exponentially before settling down to expand at a slower pace.

With his work, Hawking was one of the first to show how quantum fluctuations – minuscule variations in the distribution of matter – during this period of expansion helped shape the spread of galaxies in the universe.

It was also in the same decade that he collaborated with James Hartle to explain the Big Bang in quantum mechanical terms. For this, Hawking and Hartle developed an equation based on quantum physics that describes the universe in its early stages.

#Big Bang, #Black Hole, #Theoretical Physics, #Cambridge
The views and opinions expressed in this article are those of the authors and do not necessarily reflect the official policy or position of DailyO.in or the India Today Group. The writers are solely responsible for any claims arising out of the contents of this article.