How the kilogram gained new weight

The definition of the kilogram has changed. Now, all SI units are defined by fundamental constants of nature.

The weight is over! There’s a new kilogram in town.

The journey of a kilogram, just as it happened with life on our planet, started with the waters.

In the early 16th century, kilogram was originally defined as the mass of a litre (cubic decimetre) of water at 4°C — the temperature at which water reaches its maximum density. Since, it was an inconvenient quantity to precisely replicate, a new and more precise definition was adopted in 1799.

It defined a kilogram as the mass of a platinum alloy cylinder, the International Prototype of the Kilogram (Le Grand K or IPK), manufactured in 1889, carefully stored in Saint-Cloud, Paris. Countries, following the international standardisation, keep one or more primary 1 kg standards in their main measurement science laboratories, whose values are periodically adjusted — or 'calibrated' — against the IPK. The National Physics Laboratory of India, which maintains standards of SI units in India and calibrates the national standards of weights and measures, has a copy of number 57 of the international prototype kilogram supplied by the International Bureau of Weights and Measures, Paris.

After more than 130 years, the kilogram is in trouble.

At the 26th General Conference of Weights and Measures, on November 16 at Versailles, France, delegates representing more than 60 countries voted to implement the most significant change to the International System of Units (SI). A new and precise definition of a kilogram has been adopted wherein, it’s defined in terms of Planck Constant — an unvarying and infinitesimal number at the heart of quantum physics. The Planck constant relates a light particle’s energy, and hence mass (thanks to Einstein), to its frequency by describing the size of the packets of energy or quanta that atoms and other particles use to absorb and emit energy.

The new definition of kilogram, which will come to effect from May 20, 2019, will be based on three universal constants: the Planck constant, the speed of light and the cesium atom’s natural microwave radiation.

The idea to replicate physical objects with universal constants in order to define basic measurement units has greatly benefited the field of science and technology. Meter, the SI unit of length, was initially defined as the distance between the polished end faces of a platinum bar, at a specified temperature. It remained the international standard for most of the 19th century.

Later, in 1960, it was redefined in terms of a certain number of wavelengths of a certain emission line of krypton-86. The 17th CGPM in 1983 replaced the definition of the meter again, thus fixing the length of the metre in terms of the second and the speed of light:

“The metre is the length of the path travelled by light in vacuum during a time interval of 1/299792458 second.”

If these units were not fixed for their accuracy, many modern day tech innovations wouldn’t have seen the light of the day. The revised definitions of a Second ( as 9,192,631,770 natural oscillations of microwave radiation released by the element cesium) and meter were mandatory for inventions like GPS and wireless technology. The new definition of kilogram only became possible when we were able to develop a device to measure the Planck constant with sufficient accuracy — Kibble balance, named after its inventor Bryan Kibble.

In this instrument, an electric current is generated in a coil to produce a magnetic field strong enough to balance a mass of one kilogram. 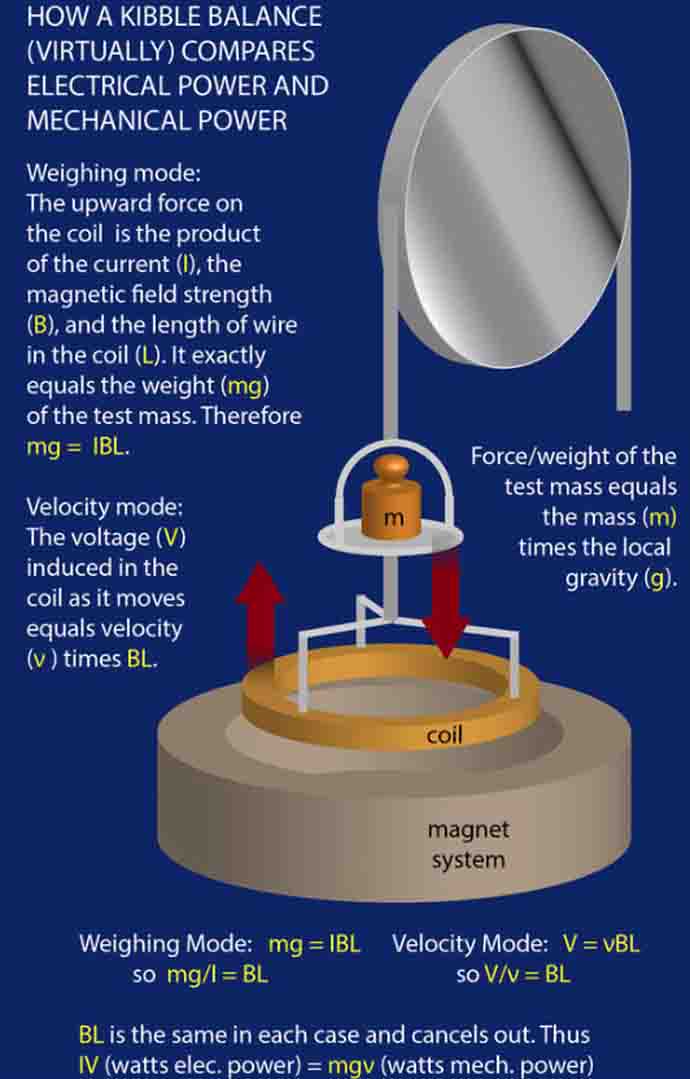 Over the past century, a significant variation of 50 micrograms (about the weight of an eyelash) is seen between the masses of the official kilogram copies. In a world of Quantum leaps, having a standard of mass, which is not uniform, is frankly unacceptable. Defining a base of a modern metric system in terms of a universal constants helps minimise the variations and thus, gives accurate measurements — that are at least one million times more stable.

To make you understand the scale of such apparently ‘harmless’ variations and the importance of a synchronised metric system, I have a story to tell.

What’s common between French Revolution and the NASA accidentally crashing its $ 125 million Mars orbiter into the Red Planet’s atmosphere?

The metric system — and everything in between.

In 1799, during the French Revolution, when monarchs were dethroned and a new system of a civil society was taking its shape according to the rational principles of enlightenment, an academy was formed to reform the system of measurements. It redefined the units of measurement based on local tradition and their earlier chaotic and non-uniform nature to a mathematical and scientific form.

In the words of a great French philosopher and mathematician, Marquis de Condorcet, the new metric system, he said, was “for all people, for all time”.

By the time Napoleon took over, the new metric system was spreading towards rest of the Europe along France’s borders. In the age of international trade, the importance of standardisation was now apparent and other nations followed suit by adopting new system of units. The British Empire lagged behind and by the time it formally accepted and implemented it, it was too late for some former British colonies, which retained the traditional measurement system, inherited from their colonial masters.

One of the former colonies was, the United States of America.

The ground staff at Houston, monitoring Mars Climate Orbiter, a 338-kilogram space probe launched by NASA to study the Martian climate and its atmosphere, are up for a surprise. The spacecraft, after completing a journey of 9.5 months and 669 million kilometer trajectory, as it approached the red planet’s atmosphere, the orbiter vanished. The spacecraft had hit the top of the atmosphere and burned itself within minutes.

There goes hundreds of millions and years of hard work by a dedicated team of scientists, into the ashes.

A NASA review board found that the problem was in the software controlling the orbiter's thrusters and there’s was a miscommunication between the software onboard and the one at the ground. Investigations revealed that the two systems were using different units of measurements.

The software to define the angular momentum on board the spacecraft relied on the metric — Newton-seconds as unit. While, the ground computers, on the other hand, used colonial era pound-seconds. This means that the two softwares were out of sync by a factor of 4.45, since, 1 pound of force is equal to 4.45 Newtons, which turned a modern scientific exploration into ashes.

America paid a heavy price for its colonial hangover of units and measurements.

With this new definition of kilogram, all of the SI units are now defined by fundamental constants of nature, going beyond the reach of geographical hangovers, and move towards a precise and quantumly engaged universe.

Let’s welcome the new kid in the town with balanced arms.

PS:  You are not going to weigh any different, because mass and weight are two different things.

Also read: If you go by Stephen Hawking's last theory, then the noted physicist is still alive

#Physics, #Measurements, #Weight, #Kilogram
The views and opinions expressed in this article are those of the authors and do not necessarily reflect the official policy or position of DailyO.in or the India Today Group. The writers are solely responsible for any claims arising out of the contents of this article.