Why WannaCry ransomware attack is a win-win for Microsoft

Legal experts say the tech giant is unlikely to run into legal trouble over the worldwide virtual insecurity.

A ransomware called WannaCry held hostage a record 2,00,000 systems worldwide by May 15 — the fourth day in a series of online attacks — in what has been dubbed as the largest such cyber assault of its kind.

This vicious piece of code is a type of a Trojan encryptor designed to extort money from users by holding their data to ransom. WannaCry needs only one computer on a given local area network to be infected, following which it automatically spreads the Trojan to all linked computers.

The malware is installed on the host computer, the user locked out and the data shelved. The hacker now demands a ransom from the host — anything between $300 and $600 in BitCoins — to unlock the system.

According to a PTI report, the government has claimed that ransomware has not touched Indian shores, with information technology minister Ravi Shankar Prasad stating there is "no major impact in India".

However, this assertion by the government goes against claims from cyber security experts. According to reports, more than 100 systems of the Andhra Pradesh police have been affected by the ransomware. Consider this map released by Malwareless. 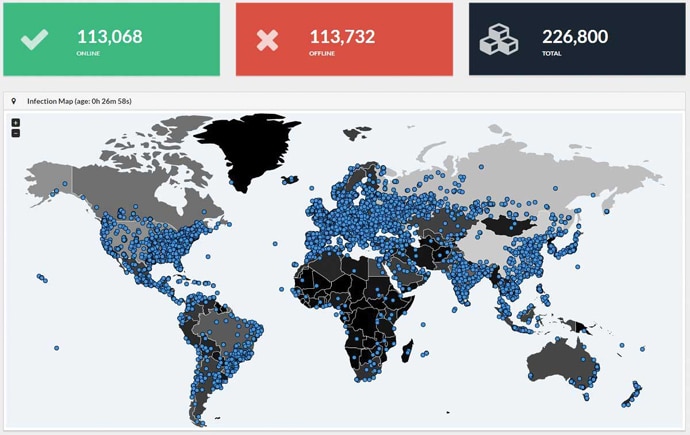 An infection map shows not only Andhra Pradesh, but also several other spots in India under threat. Photo: Malwareless India is third on the list of countries affected by the malware. Photo: Malwareless

Despite the discovery of an alleged "kill switch" for the ransomware over the weekend, many Asian countries like India, Japan, South Korea and China have been hit by the malware that began its spread from Europe on Friday.

Close to 150 countries have been affected by this pandemic, which is infecting older versions of the Windows operating system. Microsoft has sent sounded out a warning to establishments worldwide, urging them to treat this malware attack as a "wake-up call”, but hasn't taken responsibility for exposing hundreds of thousands of users to extortion by cyber attackers such as ShadowBrokers.

According to Microsoft, the affected computers did not have security patches. Users who are vulnerable to attack use older versions of Windows, including Windows XP that the company no longer supports. The company even slammed the United States' National Security Agency for not sharing the information about the vulnerability soon enough with Microsoft officials. A deeper look into the Trojan's eruption reveals a callous disregard on Microsoft's part for users of its older operating systems. Interestingly, the company had rolled out updates to "Patch the Ransomware Vulnerability" for Windows 7, 8.1, Vista SP2 and Windows 10 earlier this year on March 14, but only released "Security Update KB401258" to address the issue for less-popular Windows Server editions, including Windows 8, Vista, XP platforms on Friday.

In a statement, the Microsoft Security Response Center said, "We are taking the highly unusual step of providing a security update for all customers to protect Windows platforms that are in custom support only, including Windows XP, Windows 8, and Windows Server 2003."

However, Microsoft was not doing a favour by "taking this highly unusual step" for its paying customers, and could be sued for neglecting its users.

Microsoft is unlikely to face legal trouble over the ransomware attack, according to legal experts.

While businesses that failed to update Microsoft's Windows-based computer systems could be sued over lax cyber security, Microsoft itself enjoys strong immunity from lawsuits.

When Microsoft sells its operating system software it does so through a licence agreement that states the company is not liable for any security breaches, thus shielding it from any legal complaints, points out Michael Scott, a professor at Southwestern Law School.

The WannaCry pandemic is thus a win-win situation for Microsoft, which will only end up minting more money from the fiasco. The ransomware attack will force hundreds of thousands of users of older versions of the Windows operating system to upgrade to recent versions such as Windows 10 Pro — which currently retails on the Windows store for a sweet Rs 14,999.

Also read - India highly unsafe from global ransomware cyber attack: Here's what you need to do

#Microsoft, #Ransomware, #Wannacry
The views and opinions expressed in this article are those of the authors and do not necessarily reflect the official policy or position of DailyO.in or the India Today Group. The writers are solely responsible for any claims arising out of the contents of this article.