The floods are your fault: Why I think we are primarily responsible for the devastating flooding all around

When we choose AC comfort or our own vehicle over public transport, we are harming the environment. It's not just world leaders who can fix the planet. It's you and me, if we actually care.

When the monsoon wrecked my home state, Kerala, in 2018, it was taken as an aberration by nature that rattled its people out of their laidback lives. We considered it a one-off occurrence which we eventually fought and overcame. Although the vestiges of an old fear lingered, there was no paranoia associated with it.

We didn’t believe the floods would recur this year.

The months of June and July were, by and large, dry, triggering drought concerns. But then came deluge 2.0.

When the seasonal rains ravaged several Indian states once again, I sat up with horror and exclaimed that this wasn’t a coincidence.

A sinister thought shook me — will August be stripped of its festive appeal? Will we see more of these climatic extremities that will wreck our romantic notions about the monsoons? Will rain become a synonym for disaster, year after year? Have the weather dynamics changed far beyond our understanding? 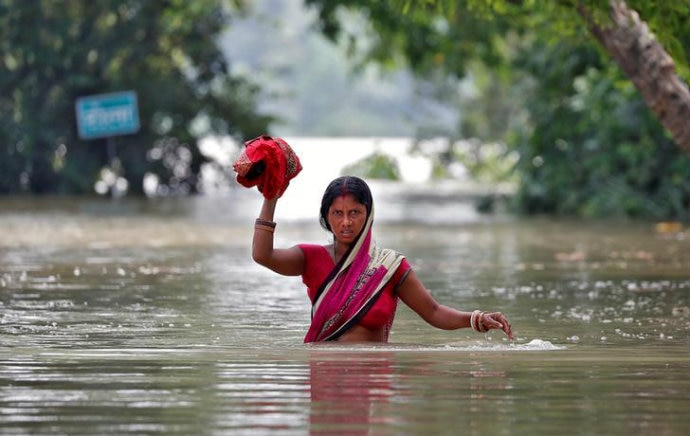 It's your fault: We are all responsible for bringing about this state of disrepair. (Photo: Reuters)

The flood fury in different states sparked several debates on the causes. It was pointed out that the landslides in Kerala were directly linked to the abusive manner in which we are treating our land and water resources. However, much of what was discussed somehow suggested that the culprits were out there somewhere. That the mafias are to blame and the loss of lives and damage to property are an upshot of the unauthorised manner in which they are pillaging the earth. They have scavenged our land shallow, wiped out green covers, clogged the river beds and reclaimed cultivable space.

It was easier to point fingers and absolve ourselves of any guilt.

We suffered because they erred.

It is categorical that there are direct reasons that lead to a catastrophe like this and some people are unquestionably culpable — but, in our race to fix the blame, aren’t we missing the role we — the common people — innocuously play in bringing the planet to this state of disrepair?

There are the greedy wheeler-dealers on one side and the indifferent commoners on the other. I belong to the latter, and when the floods drowned towns, I wondered, Am I not, as an inheritor and beneficiary of this planet’s assets, responsible for this devastation? Illegal mining and quarrying, razing forests, building skyscrapers, etc., only explains half of this horrific monsoon tale — the other half has you and me playing crucial roles in this dystopian story. The day is coming: When we will fight our neighbours for a pail of water. (Photo: Reuters)

How often have we paused to think if we really needed the air conditioner before turning it on? How often have we put our foot down and decided that we will use our reusable crockery instead of disposables in our weekend get-togethers? Can we estimate the amount of water that runs down our drains every day? How many of us even think of public transport as an option?

No, we don’t imagine that the simple transgressions we make in our daily lives can make the weather unruly and wreak havoc. Climate change is very much on our minds because it has been trending for a long while now, but only as a topic of cursory discussion — not as an emergency that demands action. We conveniently believe that it is for world leaders alone to make pledges and take action.

Not you and me.

It is as if we have arrived on this earth with privileges that guarantee immunity.

But the recent incidents must jolt us out of our reverie and induce some solid sense into our complacent heads. The floods and fires can reach our doorsteps. The drought can create shortages on our store shelves. We will, one day, fight with our neighbour for a pail of water. If we still think that we have the influence and wherewithal to beat the consequences of climate change, that the tragedies are in the fate of the poor alone, even God cannot save us — and our children — from what is imminent on us.

When I express sadness and solidarity in words for the people who are caught in natural disasters, make fashionable statements on climate change, and then go back and sink into the sofa, flipping channels with the air conditioner on, I feel like a wretched fraud. Why drown their tomorrow? Let's teach our children about climate change today, so they can make informed choices. (Photo: Reuters)

I do not have it in me to be an Al Gore or Greta Thunberg, but I know this — there are things that I can do.

It is not possible to become overly cautious in every move I make — but I can turn the AC off and bear the sweat a bit, take the bus or the train for local commutes, wash the cutlery after a party, refuse plastic bags at the supermarket, and above all, as a mentor for children, make them acutely aware of what awaits us by having conversations with them. A majority of the young ones don’t have the slightest idea that we are all in it together. It is not in their scheme of things at all — because we haven’t told them.

I will tell them in simple language that if the rain that is due in a season falls in a few days and drowns places, it is because the oceans are getting warmer, there is more evaporation and therefore increased precipitation. The winds that are driving the clouds are going berserk. There is no way one can tell where they would fall and when. And for all this, we are liable.

The children will comprehend reality much better than us. They are not indifferent. They will believe me when I tell them, ‘By wasting water and power, by dumping plastic, by being selfish, you are signing your death warrant.’

It isn’t that we don’t have a recourse to all this.

It is just that between essential life options and expendable luxury, we choose the latter.

For this attitude, we deserve punishment — in ways nature deems fit.

Also read: Deccan in deluge: What makes the floods an annual saga year on year?

#Environmental conservation, #Flood relief camps, #Global warming, #Climate change
The views and opinions expressed in this article are those of the authors and do not necessarily reflect the official policy or position of DailyO.in or the India Today Group. The writers are solely responsible for any claims arising out of the contents of this article.

Author is a freelance writer based in Dubai.