Why did we root for a stalker 25 years ago? Because 'Darr' established a method to Rahul’s madness.

Shah Rukh Khan is epitomised as the 'king of romance' in Bollywood — a stature he’s built for himself and now claims complete autonomy over. “There is no one who loves like you, Shah Rukh,” wrote a friend on Facebook as she parked herself in the theatre as his latest outing, Zero, started playing. Indeed, no one loves like Shah Rukh.

For what is love without the grand gestures — the promise of that warm embrace that will heal your broken heart and smoothen your rough edges, and even if it doesn’t, who cares anymore after you’re in his arms anyway.

Let’s spare a thought, however, for how this brand of romance came into being — through Shah Rukh Khan, more precisely, an obsessing, stalking, desperate kind of Shah Rukh Khan, as seen in his earlier films.

Darr, a particularly potent example, released 25 years ago on this very day, has stirred many debates over the years as to how it made stalking 'cool'. Still, if you have any doubts in your mind, picture this: the film stars Sunny Deol and Juhi Chawla, both bigger stars than Shah Rukh at the time who were essaying positive characters. Yet, a supposed newbie as an unlovable devil shines and makes a name for himself.

Darr and Baazigar released the same year — 1993 — when Indian cinema took note of this boy called Shah Rukh Khan, a familiar face from Fauji and Circus, and Dil Aashna Hai and Deewana. But Baazigar and Darr were something else. For it fraudulently termed the bad guy as the 'anti-hero', a concept that was going to be embedded in our brains. Not taking no for an answer. (Source: YouTube screengrab)

Aside from legitimised stalking, Darr also robbed women of the right to say ‘no.’ Kiran (Juhi), a student, is in a relationship with Sunil (Sunny), a Navy-Marine Commando, happily heading towards marriage. They are a 'perfect match'. And their families are thrilled it. In comes Rahul Mehta and things change forever.

Is it ironic that Shah Rukh first took on the weight of ‘Rahul’ in Darr itself? I think not.

Trust Yash Chopra and Yash Raj Films to always paint such a picture of romance that makes a certain sense of longing bubble in your stomach. No one is immune to the cumulative effect of snowy mountains, chiffon sarees and those lascivious curves melting under raging passion. In Darr, the dream maker put a stalker in the middle of this and permanently damaged the wiring in our brains.

Technically, you are supposed to hate this Rahul, the guy scheming to separate lovebirds Sunil and Kiran. He starts off slow — singing in the buttery voice of Udit Narayan, then moves on to cutting himself to show his conviction — with a bloody ‘Kiran’ carved on his chest.

That’s a tremendously red flag right there and the reason why you’ve had unwanted love letters shoved into your hands because, tu haan kar ya naa kar, tu hai meri insert name here 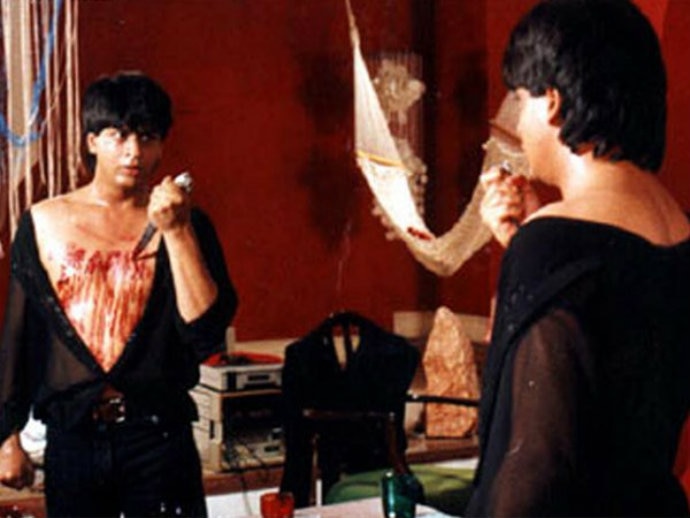 You know where the trend of bloody love letters started from. (Source: YouTube screengrab)

So ingrained is this behaviour, that in 2015 an Indian security guard in Australia escaped jail time citing harassment of women as ‘normal’ and a by-product of years of conditioning through Bollywood films.

Rahul doesn’t stop after his cutting (edge) antics fail to garner so much as an ‘aww’ from Kiran. He gets beaten up by dhai kilo ka haath — Sunil — adding more blood to his base make-up. He gets arrested and more beating follows and then he ultimately abducts Kiran because yeh zaalim duniya just doesn’t get his love.

All this while as the audience, especially the female population, is weeping wells and falling burstingly in love with this man.

So why did we root for a stalker 25 years ago?

Because Darr established a method to Rahul’s madness.

A bad guy with a heart of gold is an old trope in Bollywood. But Rahul’s heart was no gold. Yet, and the makers had convinced us of this, it’s not his fault — because of a traumatic childhood and an uncaring father.

Could this be a prelude to depression? I think so. Rahul needed help, and everyone failed to see that. (Source: YouTube screengrab)

Twenty-five years ago, Darr (and Khalnayak, released the same year, and Baazigar) set the stage for a discussion about depression, but failed to address it the right way. Not everyone struggling through chronic depression topples over the edge on the dark side, but back in 1993, we neither had the understanding, nor the kid gloves we handle depression with today, in 2018.

Result? A sense of awe towards this damaged soul that we want to fix with our love.

Add to that Yash Chopra’s indoctrinating brand of romance, and we have a toxic, toxic kind of love that we were going to assume was ‘normal.’

At the risk of starting a war, let me just say that it is not okay for Rahul to do what he did — damaged or not, depressed or not. And in opening a can of worms, by introducing the subtext of depression in Rahul’s character, but not actually addressing it or dealing with it the right way, the makers have ruined a lot in more ways than one.

No, this behaviour is not ‘normal’ in love.

Yes, you are ill and need help if you find yourself prone to such behaviour.

No, depression doesn’t only manifest itself in self-harming or creepy ways. There’s so much more to it.

Yes, you belittled both love and genuine depression — and its cry for help through Darr.

Also read: #25YearsOfBaazigar: The many firsts of the Shah Rukh Khan, Kajol and Shilpa Shetty Kundra-starrer

#Sunny Deol, #Juhi Chawla, #Stalking, #Depression
The views and opinions expressed in this article are those of the authors and do not necessarily reflect the official policy or position of DailyO.in or the India Today Group. The writers are solely responsible for any claims arising out of the contents of this article.