3 films of 1957 that changed the way India watches Bollywood

The year 1957 is special for Hindi cinema as it gave us three films that can truly be described as “classics” today, having been watched and enjoyed by several generations. 60 years of popularity and interest are enough to make them cult films. These movies are now in their diamond jubilee year.

Mother India, Pyaasa and Naya Daur changed our cinema in many ways, bringing to it themes, music and stories that questioned our social structures and concepts, challenged them and brought with them fresh ways of looking at our problems just a decade after the country became independent. Do Aankhen Barah Haath and Tumsa Nahin Dekha also came in this year. These two are no less memorable than the three “Big Three”.

It is indeed interesting to note that Mother India, Pyaasa and Naya Daur have behind-the-scenes stories that may be called more “filmy” than the films themselves. While Mother India brought Sunil Dutt and Nargis close and led to their marriage, Naya Daur increased the distance between Dilip Kumar and Madhubala and separated them forever! And Pyaasa has the fascinating story of how Dilip Kumar did not/could not be part of this legendary film.

Mehboob Khan’s Mother India, for the first time, showed the image of a powerful Indian woman played by Nargis to whose career this film gave great dignity and stature. Till then she had only been seen in the romantic films of Raj Kapoor. The film’s well-known poster depicts Nargis pulling the plough through the field. The poster shows how on one shoulder Radha has the responsibility of her poverty-stricken family and on the other, the weight of a nascent India.

Each generation that watches Mother India can feel the extreme pain and suffering of Radha and her family. It pulls at their hearts and brings about a catharsis. Such is the eternal power of this film, Mehboob Khan’s magnum opus. It was during Mehboob Khan’s movie Mother India that Sunil Dutt and Nargis came closer. The two expressed their love for each other on the sets of Mother India. Somewhere, during this period, there was fire on the sets of the movie, and Sunil — like a true hero — did not care about his life while saving the life of Nargis, who was caught in the fire.Sunil and Nargis got married secretly in 1958 and then announced the news to their close ones.

If Mother India brought together this wonderful couple, Naya Daur was the film during which another beautiful couple namely Dilip Kumar and Madhubala grew far apart. This story is one of a love gone sour. Driving the lovers to a court case and widening the gulf between them. They wished to marry each other but Madhubala’s father, as the whole world knows by now, was against the idea of his daughter marrying Dilip Kumar as she was the only earning member of the family.

When she was shooting for BR Chopra’s Naya Daur, which had her and Dilip Kumar in the lead, Chopra wanted to shoot a schedule in Madhya Pradesh. Madhubala’s father was unwilling to let her go on an outdoor schedule with Dilip Kumar.

Chopra was forced to replace Madhubala with Vyjayanthimala in the film. Upset at this, Madhubala’s father is said to have threatened to sue the production company. Chopra sued Madhubala before her father Ataullah Khan could take any action for the breach of contract. 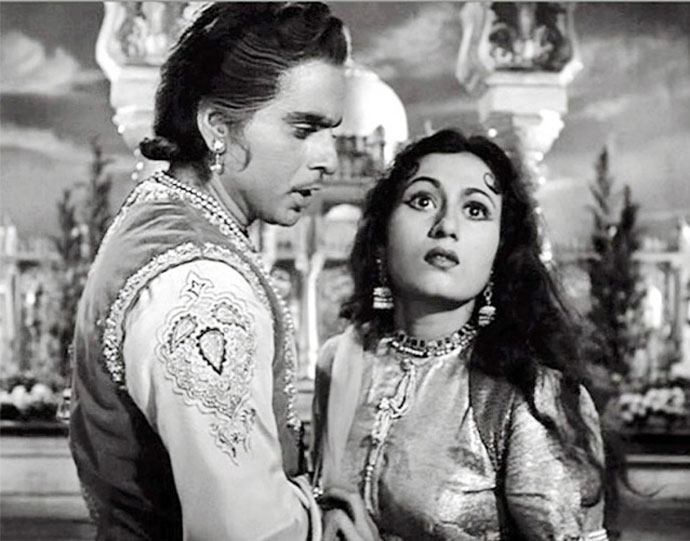 Dilip Kumar testified against Madhubala in the court, and she lost the case.

Later, BR Chopra dropped the case when he realised that Madhubala might have to go behind bars. After that, it is said that when Dilip Kumar still wanted to marry her, Madhubala insisted that he apologise to her father. As he refused to do that their relationship came to a sad end.

Naya Daur was indeed a novel film that ushered in a new era (naya daur in Hindi) regarding social issues being merged with entertainment and beautiful music and packaged as a Hindi film with a big star like Dilip Kumar playing the role of the young and vibrant Tongewallah, trying to prove that machines are for the convenience of humans, not for their destruction.

The film made its point effectively and aesthetically.

It is always interesting to imagine Dilip Kumar in the role of Vijay in Pyaasa. Dilip Kumar was offered the role which he decided not to play. It is said that he felt it was too close to his role as Devdas in 1955.

Perhaps there were other reasons too. Pyaasa was a departure from the traditional style of film-making in Hindi cinema. It was successful both as a commercial film as well as an artistically-made film. 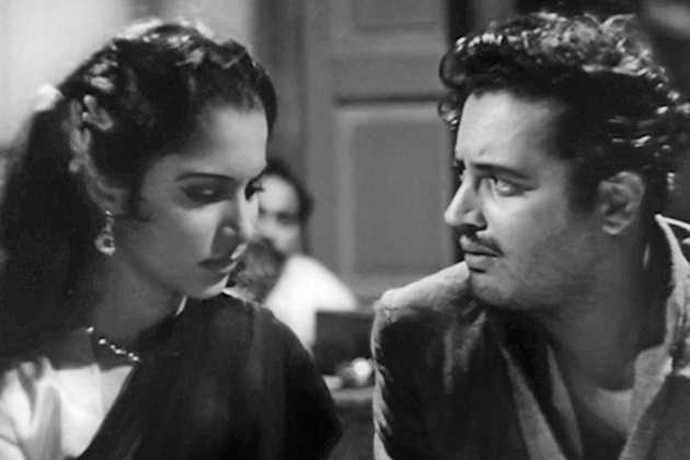 It is always interesting to imagine Dilip Kumar in the role of Vijay in Pyaasa.

The story about Dutt meeting Dilip sa’ab and narrating the film to him along with Abrar Alvi, the film’s writer, has always been associated with Pyaasa and will always be. Guru Dutt thought Dilip Kumar would be a better Vijay. Also, he wished to focus all his attention on directing the film.

The story was narrated to Dilip sa’ab who argued that the heroines' role should be the one which evoked sympathy of the audience and not Gulab’s role that was played by Waheeda Rehman.

Also, it is said that he wanted Madhubala to play the heroine instead of Mala Sinha.

Dilip Kumar argued with Abrar Alvi, the scriptwriter, but Alvi stuck to his stand. Though Dilip Kumar agreed to play the hero, he never turned up on the sets on the day the shoot was to begin.

Till now, it is not known why this happened. It was perhaps destined that Guru Dutt play this intense role and remain in our hearts forever as the struggling poet who wants to throw the world away.

Three films, 60 years. They are as new as they once were. In fact, their relevance has grown. The makers had such foresight and vision that these classics can never become antiquated.

Also read: Why legend of Jim Corbett is inextricably woven into Kumaon's folklore