The story of Ahalya and Indra: Was it really adultery?

The law books of ancient India blame the man squarely, on the assumption that all women are seductive, but the man is culturally responsible.

In the story of Ahalya, the king of gods Indra impersonates a human husband in order to gain sexual access to a human woman, assuming the form of a particular man in order to commit adultery with the man's wife. It has been mentioned, told and retold in Hindu scriptures from the Brahmanas (9th-6th century BC) right upto the Puranas, which continued to be written well in to the medieval period (5th to 15th century AD). It is told twice in the Ramayana and twice in the Mahabharata.

Bearing in mind that in every version but one, Ahalya is approached and seduced/raped/persuaded by Indra in the form of her husband, I'd like my readers to consider guilt and responsibility in the said adultery. Wendy Doniger points out that the law books of ancient India (the dharma-texts) blame the man squarely. This is on the basis of the assumption that all women are seductive, just as all snakes bite; but the man is culturally responsible. Knowing that all women are seductive, the male adulterer is at fault when a woman is allowed to do what she is naturally inclined to do. In myths, on the other hand, the woman is almost always to blame and is cursed, mutilated or killed. In this post I'm going to compare briefly, versions that appear in the Ramayana and the Mahabharata. GC Pande's massive volume on life in ancient India describes the Ramayana as "reflecting an age of unquestioned moral idealism". Living life according to traditional norms and morality is the leading idea of the epic. The Mahabharata, on the other hand, is a text in which ethical principles and cynical policies are in constant conflict. Despite moralising, didactic portions, "realpolitik" is not given up in practice, and the whole atmosphere is one of bold questioning and intellectuality. Their respective versions of the the Indra-Ahalya story reflect this.

In one telling, there is no masquerade at all. Indra, as himself, simply takes her by force - she was raped. (Ramayana 7.30.17-36.) Subsequently, we are told that Indra comes in the form of Gautama (her husband). She sees through the disguise but goes ahead anyway out of sexual curiosity about the king of the gods. The deed done, Indra rushes out of the hut and runs straight into Gautama, who is returning from a bath in the Ganges, blazing forth with his ascetic power. He curses Indra thus "You fool, since you have taken my form and done what should not be done, you shall be without your fruit." And as soon as the great-souled Gautama said this in anger, at that very moment the two testicles of the thousand-eyed god fell down. (Later restored with the testicles of a ram... ) Another version of the curse makes Indra sahasrayoni (possessing 1,000 female genitals).

Ahalya is also cursed. Turned to stone in one version. "You will live here for many thousands of years, eating wind, without any food, lying on ashes and generating inner heat. Invisible to all creatures, you will live in this hermitage. And when Rama, who is unassailable, comes to this terrible forest, then you will be purified. By receiving him as a guest you will become free of greed and delusion, you evil woman, and you will take on your own form in my presence, full of joy." (Ramayana 1.47.15-31.) 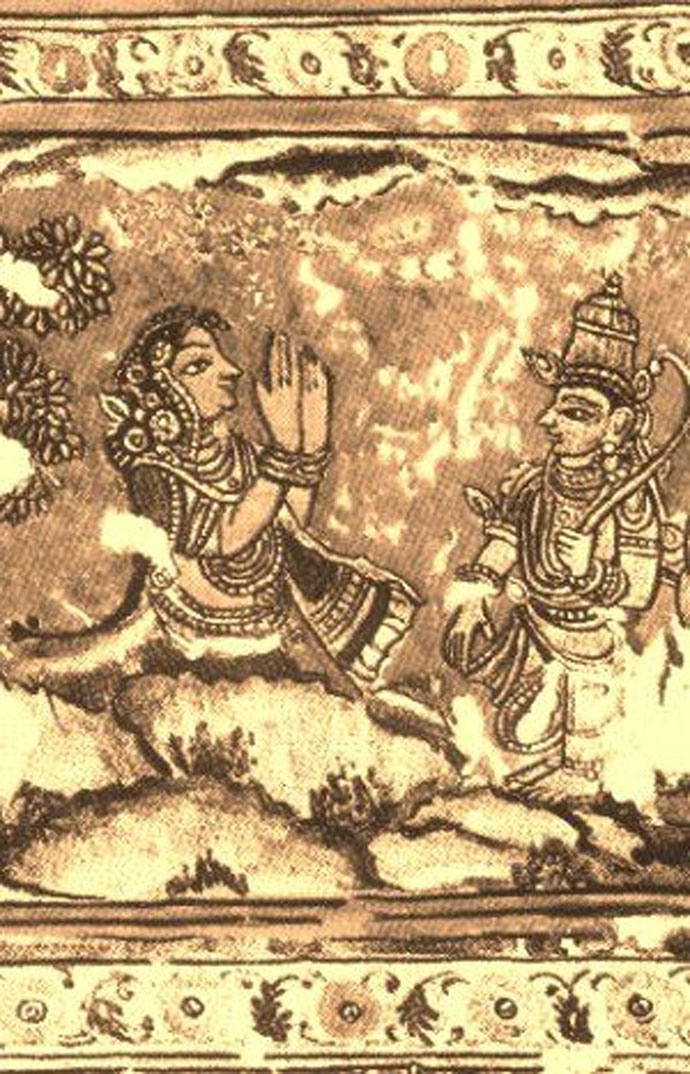 In this version, Indra comes to Gautama's asrama in the disguise of a brahmin, and when the sage is away, takes his form and asks Ahalya to have sex with him. It is not clear whether she recognises the god, but there is room for doubt, because she states that "her husband's' desire for sex during the day is unlike him. So perhaps she does, or doesn't know it's not her husband? Gautama has a son called Cirakarika, because he does everything after much deliberation, and thus takes a long time to accomplish even the smallest of tasks. After the adultery, Gautama orders his son to kill his mother, and leaves for the forest, where he repents for his hasty decision. He blames Indra for polluting his wife because of his passion. "My wife is thus in no way a culprit in the crime."

Meanwhile, the son ponders and concludes that a woman is not guilty if she has not consented (to the act of adultery) willingly; that women are physically weak and have to submit to the desires of men. So if a man leads a woman to adultery, the woman is not to blame. To add to this, Gautama considers: "If examined from the point of view of dharma, neither my wife, nor myself, nor Indra is to be blamed. It is my own "yoga" (concentration) that is to be blamed... because jealousy is the source of all unhapiness... and I am submerged deeply in sin by entertaining jealousy". Jealousy, itself a sin, and opposed to sadacara (behaviour of good people), a faulty emotion, takes the blame, and also the sting out of the adultery (intentional or unintentional).

And so the issue remains unresolved in my mind, at least. If Ahalya was raped, was she guilty? Rama's comment to Sita after he kills Ravana would definitely seems to indicate so. Although the narrative of the epic states clearly that Sita is pure, Rama compares her to a sacrificial offering that has been licked by a dog, and tells her she is free to go her own way (Check it out if you don't believe me!). If Ahalya thought the man in her hut was Gautama, where does the blame lie? And if she thought he was out or sorts, does that mean she knew it was another man? And if she knew what she was doing, is Indra to blame in any way - after all he's not married to Gautama, is he? And are there others way of looking at the episode?

Wendy Doniger in the History of Religions.

#Sujoy Ghosh, #Indra, #Ahalya
The views and opinions expressed in this article are those of the authors and do not necessarily reflect the official policy or position of DailyO.in or the India Today Group. The writers are solely responsible for any claims arising out of the contents of this article.