With the 'Kesari' trailer, Akshay Kumar and his team of many producers already pack a powerful punch.

Till date, we knew of two kinds of 'Kesari': the Punjab Kesari (Ranjit Singh) and Zubaan Kesari.

Then, on February 21, on the auspicious occasion of International Mother Language Day, we got the third Kesari in our lives (only the trailer though), which has inherited a few attributes from both the former Kesaris — strength from the Punjab Kesari and colour from Zubaan Kesari.

Kesari is one of the most-awaited movies of 2019.

Why? Of course, because everyone is saying so.

But jokes apart, there are serious reasons too. The year 2019 will be remembered in the history of Bollywood as a time which saw an unforeseen wave of patriotism. There’s no need to again mention Uri: The Surgical Strike, Manikarnika, etc. But there is a need to mention Kesari — and Salman Khan's Bharat.

Kesari is the story of Havilder Ishar Singh who led an army of 21 Sikhs to fight against 10,000 Afghans in 1897, known as the Battle of Saragarhi. The Afghans won the battle. The post was recaptured by another British Indian contingent after two days.

Havilder Ishar Singh was part of the Indian British Army. So, the story is not about defeating the goras — as in Lagaan or Thugs of Hindostan. It is of Sikh pride — putting up a fight till the last moment; proving that Indians can fight, they are not cowards, they are not born to be slaves. They are warriors.

But the movie will be released on March 21, timed with Holi. 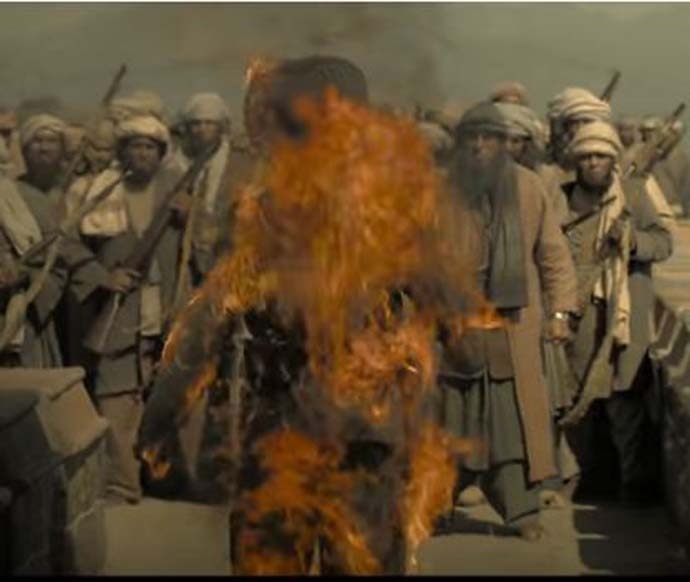 The movie is about Sikh pride. And also Sikh large-heartedness. (Photo: YouTube)

Akshay Kumar is natural in such nationalistic roles. He has nothing to prove and improve on. The three-minute trailer — with background music that leads to goosebumps and the settings with a light tone of saffron — shows how comfortable Akshay Kumar is, delivering lines which set passions afire.

The trailer has been made with much attention and thought.

Akshay Kumar is natural in these roles. Here, his appearance is mesmerising. (Photo: YouTube)

There’s a scene where a disgruntled Sikh soldier of Ishar's battalion wants some soldierly work — he's not happy joining hands at making a mosque.

“Fight when the time comes… Rabb se kya ladna,” Ishar tells the soldier. We are sure there will be claps in the theatres, and no wonder this scene made it to the trailer because it’s also so timely.

Parineeti Chopra is also there, in some blink-and-miss moments.

Anurag Singh is the director of this Karan Johar movie. Now, as many will Google this not-heard-of director, we are saving you a click. Anurag is known for his Punjabi films like Punjab 1984, Jatt and Juliet, etc. Of course, he is a Punjabi and that’s why the trailer also looks so natural.

There are five producers of the film: Hiroo Yash Johar (Karan Johar’s mother), Aruna Bhatia (Akshay Kumar’s mother), Karan Johar, Appoorva Mehta (CEO of Dharma Productions) and Sunir Kheterpal (Azure Entertainment). Salman Khan was also supposed to be one of the producers early last year but we can understand why he backed out from this ‘Karan-Akshay’ business. Rabb se kya ladna!

Also, the trailer asks you to pre-book tickets to get Kesari merchandise.

Also Read: Dear Bollywood, not every occasion is right for you to score populist points