Allahabad becomes Prayagraj: No, Akbar did not rename Prayag. He built a new city called Ilahbas

The 16th century monarch chose a name that respected secular values. What is a 21st century chief minister doing?

On Akbar’s birth anniversary on October 15, 2018, the CM of Uttar Pradesh, Yogi Adityanath, declared that the name of the city of Allahabad would be changed to Prayagraj.

My first thought was — ‘why not Prayag?’ Prayag is the name mentioned in the Vedas. Prayagraj is a highly popular train, started in 1985, on which I have travelled many a times. It starts from New Delhi and goes to Allahabad Junction. 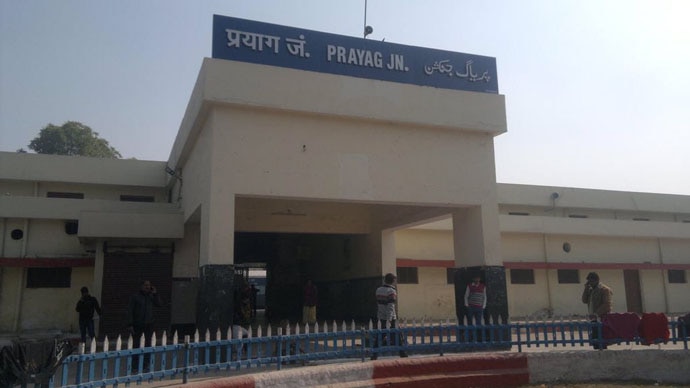 I turned to Prof Saiyed Zahir Husain Jafri, professor of medieval history in Dept of History, Delhi University, who has done considerable research on the Mughal era, to find out the truth.

Why had Akbar changed the name of the city? Or had he just founded a new city?

In fact, Prayag was never a city, but a yagna sthal, says Prof Herambh Chaturvedi, professor of history in Allahabad University.

That the name of Prayag remained intact is borne out by the fact that a station named Prayag, and another named Prayag ghat, is functional for pilgrims to the holy confluence, or Sangam. In fact, on my visits to Allahabad, I when I visited the Sangam area, I knew that I was in Prayag.

Akbar’s administrative reforms are very famous and glimpses of many of his revenue and administrative reforms can still be seen in our structures today. One of them was to create sixteen subahs of Ilahbas, with Ilahbas at its capital. In 1583, he laid the foundation stone for a fort, and the Ilahbas fort came up. Why did Akbar choose the name ‘Ilahbas’?  Prof Ali Nadeem Rezavi, Chairman of CAS, Dept of History says: “Akbar named it Ilāh bās, which during the reign of Shahjahan, became popular as Ilāhabād. The British started writing it as Allahabad, the City of Allah!” He elaborates that there are two reasons for the name ‘Ilāh bās’.  One reason is forwarded by contemporary Persian sources, and the other is a legend based on local mythology. Another proof that two separate entities of Allahabad and Prayag co-existed. (Photo: @rmanish1)

“According to the contemporary chroniclers like Badauni, when Akbar was informed about the devotion of the Hindus for the sacred site of Sangam and their wish to die there (as death there would mingle their soul with the spirit of God), he instantly decided to rename the place as Ilāh bās, the Abode of God! He was in fact honouring the Hindu sentiments by acknowledging its divine status!”

As far as the legend is concerned, he says, “Ilā is actually the mother of Pururvas, the progenitor of Aila tribe. The Mahabharata mentions the name also as a river (variously identified) or as a king. Vās means abode. Again, the meaning comes to Abode of Ilā!

Which of the above is Yogi negating?”

Having been born and brought up in the land of the Ganga Jamuna with its unique sangam of cultures, I have been visiting Allahabad and Prayag since I was a child.

On my last two visits, I was even fortunate enough to get permission to visit the Allahabad Fort, built by Akbar in 1583. It now houses the Indian army and has limited access. This fort was built near the confluence of the rivers Ganga and Jamuma, called Sangam. By today's standards, Akbar would have been a Left-Liberal. (Photo: Wikimedia Commons)

This fort was the biggest of all the forts made by Akbar, and included four distinct areas, according to Akbarnama. Unfortunately, not much remains of the buildings.

I stood on top and admired the Ganga Dwar, which gave direct access to the Ganga ghat, and was used by his Rajput wives for doing puja.

It was with great piety and excitement that I visited the area where the sacred banyan tree Akshay vat grows inside the fort, and the underground temple — Patalpuri — inside it.  I have a leaf of the banyan tree preserved with me, as the priest there said that it signifies longevity and health.

I am sure that Akbar himself would have also visited these sacred spaces with the same devotion and piety.

After all, he had started his famous Din e Ilahi (religion of God) a year earlier, in 1582. This ‘din’ had taken elements form every religion, and was intended to be a syncretic religion or way of life, which could bind all the people of India together like the Sufi mystical path of guidance.

Akbar had earlier enunciated the policy of Sulh e Kul, or Absolute Peace, and ruled according to the concept of good for all for administrative purposes. Din e ilahi was based on that. However, neither of the two were religions.

Having held many religious discourses in his ibadat khana in Fatehpur Sikri with scholars and priests from various religions, Akbar had reached the conclusion that every religion had elements of truth in it.

According to the famous Oriental scholar Annemarie Schimmel, “because of his apparent renunciation of Islam he was damned by orthodox Indo-Muslim historians but revered as the ‘shadow of God on earth’ and the greatest of all the Indo-Muslim rulers by the mystically inclined and members of the peace movement founded on the belief in the essential unity of everything.”

So critical was Badauni of Akbar’s anti-Islamic-orthodoxy stand that his son made his book, Muntakhab-ut-Tawarikh, public only after Badayuni’s death in Jahangir’s reign. Akbar's decision was taken for the sake of administrative ease. Yogi Adityanath's was not. (Photo: PTI/file)

According to Prof M Athar Ali in his essay ‘The Perception of India in Akbar and Abul Fazl’, Akbar composed verses in Hindi, he grew his hair and never kept a beard in imitation of “the loyal Indians”. He got Sanskrit texts translated into Persian. So influenced was he that Badauni felt that Akbar had ceased to be a Muslim from 1581 onwards. He records that Akbar performed Hom, a kind of fire worship, along with his Hindu wives.

Sheikh Ahmed Sirhindi, a religious leader, felt that Akbar was hostile to Islam. It is thus safe to say that Akbar had a very tolerant attitude — in today’s world, he would be called a left liberal, I am sure!

(The narrow-minded devotee saw me as an infidel

And the infidel thinks I am a Muslim

In conclusion, Akbar did not change the name of Prayag, he founded a new city for administrative ease. It was later changed to Ilahabad in Shah Jahan’s reign, and Allahabad under the colonial rule for ease of pronunciation.

The UP chief Minister has changed the name of the city Allahabad, that was a colonial version of Ilahbas, not for administrative or pronunciation ease — as its going to be a logistical nightmare to change the names on stationery, signage etc. — but with an eye on the elections of 2019.

In a 16th century monarchy, it was an administrative decision. In a 21st century secular democracy, it is dictated by electoral concerns.

So yes, if we are to compare apples to oranges, in that sense, there was no bigotry then, there is no bigotry now.

There are two major line of arguments here sir:1. Yogi is as secular as was Akbar2. Akbar was as big a communal bigot as is Yogi.Two sides, same coin. Pick you argument, lets accept the truth and reconcile. There is no truth in saying Akbar was Secular and Yogi is communal. https://t.co/qpQoZtRBl6

However even Akbar’s staunchest critics would not call him communal, nor would Yogi Adityanath’s staunchest fans call him secular!

Also read: By renaming Allahabad to Prayagraj, how Yogi Adityanath ended up paying a great tribute to Akbar

Post your comment
#Yogi Aditayanth, #Akbar, #Prayagraj, #Allahabad
The views and opinions expressed in this article are those of the authors and do not necessarily reflect the official policy or position of DailyO.in or the India Today Group. The writers are solely responsible for any claims arising out of the contents of this article.