On a famous son of Kasganj: Hazrat Amir Khusrau

In fact, he has often been called the Tooti-e-Hindustan or parrot of Hindustan. For me, however, he is Mr Hindustan. There’s not a day in the life of ordinary Indians when we don’t consciously or subconsciously use or consume one of his inventions, sayings or words of wisdom.

Amir Khusrau was born in 1253 AD. His mother was the daughter of Rawat Arz, a Rajput and the famous war minister of the Delhi Sultan Balban.

Today, when Kasganj is in the news, it is time to take a look at Khusrau’s life and legacy. In fact, it would not be wrong to say that this son of Kasganj was the father of the ganga jamuni tehzeeb that is under threat today.

He had become the disciple of Hazrat Nizamuddin Auliya of Delhi at the age of seven and the love between Khusrau and the Peer o Murshid is legendary. However, Khusrau maintained a fair balance between his spiritual and worldly lives. He served under various nobles and the five sultans of Delhi, including Jalaluddin Khilji, Alauddin Khilji and Ghiyasuddin Tughlaq.

Even today, he is one of the most celebrated poets and writers of India. Khusrau wrote a total of 99 books out of which only few are available today; he gained fame during his lifetime itself.

The famous historian Ziauddin Barani, who was his contemporary, says: "A man with such mastery over all forms of poetry has never existed in the past and may perhaps not come into existence before the day of judgment."

Barani adds that apart from being conspicuous in prose, Khusrau was an advanced mystic and excelled in playing and composing music. High praise coming from a contemporary! 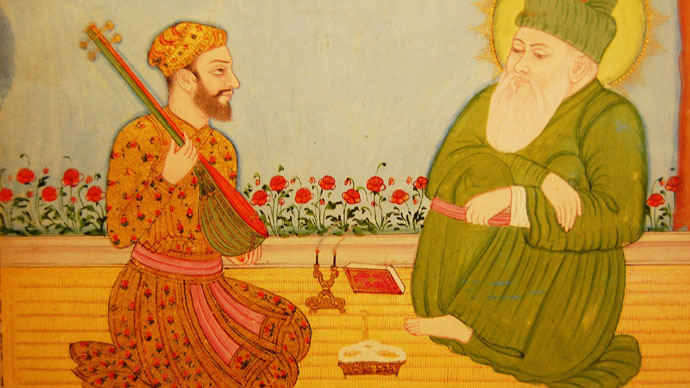 He believed that just as Muslims have various angels, death et al, Hindus have multiple gods but believe in one khuda called Om.

Maulana Shibli Numani wrote in Shir’ul Ajam that, "no person of such comprehensive ability has been born in India in the last 600 years".

While most poets excelled in one form or the other, Khusrau wrote qasida, masnavi, ghazals, rubai, mustazad and his verses went into several lakhs.

His masnavi Qiran-us-Sa’dain, written at age 36, earned him the post of poet-laureate in the court of King Kaikobad, the grandson and successor of Balban.

This is also called "Mathnavi dar Sifat-I-Dilli" as it was his ode to the city of Delhi.

In "Mathnavi Nuh-Sipihr (songs of nine heavens)", Khusrau pays further tribute to India’s birds and animals, flowers and trees, its languages and people.

He talks of the religious and cultural plurality of Hindustan of those times. He talks of the mutual love between Hindus and Muslims and equates a Haji going toMecca with a Hindu pilgrim going to Somnath.

A Muslim haji proceeding to Mecca met a Brahman pilgrim going to Somnath. Owing to the strength of his devotion, the Brahman was measuring the ground with his body and the stones of the road had torn off the skin of his breast.

Prof SH Qasmi, the well-known Persian scholar and former head of department of Persian at Delhi University, says that in "Qiran-us-Sa’dain", Khusrau has talked of the communal amity and harmony between Hindus and Muslims. Khusrau writes that Hindus also believe in one God and that he has talked to the Hindu priests and scholars and has come to the conclusion that the idols are just representations of various aspects of Khuda.

He believed that just as Muslims have various angels, death et al, Hindus have multiple gods but believe in one khuda called Om.

Khusrau says that Hindustan is called Hindustan jannat nishaan (reflection of heaven) because we get all the things that are found in heaven, such as peacocks, fruits et al.

"I know that in this land lie concealed wisdom and ideas beyond compute.Greece has been famous for its philosophy but India (Hindustan) is not devoid of it. All branches of philosophy, if one examines carefully are found here. Logic, astrology, kalam (metaphysics) — in fact, every scince except "faqr" (sufism) is found. Physics, mathematics, astronomy, divination of the past and the future are known. In divinity (or metaphysics) alone the Hindus are confused, but then so are all the peoples. Though they do not believe in our religion, many of their beliefs are like ours."

(Translation from The Life And Works Of Amir Khusrau, by Mohammad Wahid Mirza.)

On the instruction of his spiritual guide Hazrat Nizamuddin Auliya, Amir Khusrau started writing in the local bhasha, which he called Hindavi — akin to today’s khari boli. His work in Hindavi is almost as extensive as his work in Persian. He had also learnt Sanskrit. In that sense he can be called Baba e urdu, or father of Urdu.

His genius was not confined to poetry alone and by Khusrau’s own admission, "I am a master of music as well as poetry. I have written three volumes of poetry and my musical compositions would also amount to three volumes, if they could be reduced to writing."

No one after him could get the title of Naik.

According to Sangeet Natak, "A superb musician in his own right and credited with the invention of several musical instruments and with having laid the theoretical basis for much of Indo-Muslim music, Khusraw imparted to his ghazals a lilt and melody that have assured their inclusion in musical programmes in India to the present day."

In addition to inventing many ragas and raginis, he is believed to have invented the tabla. He is also the originator of tarana, khyaal and qaul and credited with the creation of 17 talas (patterns of rhythm), including those prevailing today such as teen tal, Jhoomra and Ara Chautala, and a number of ragas, including Yaman Kalyan, Sazgiri and Sarparda.

Though he himself has modestly stated that they already existed in Indo-Iranian music.

"Nevertheless, subsequent scholars consider Khusro to be the creator of a number of them. They point out that the Ragas mentioned are actually blends of existing Indian and Persian melodies. Yaman, for example, is an amalgam of the Indian Hindol (as it existed then) and the Persian Nairez or Nairiz. Similarly, Saazgiri comprises the ancient Indian forms of Purbi, Vibhaas, Gaud and Gunkali along with the Persian Ahang."

Though mystic singing or sema existed much before, it is Khusrau who gave it the present shape of qawwali.

He was entrusted with the task of setting the Prophet Muhammad’s qaul (saying) "Man kunto Maula" to music.

to help to induce a trance; to give body and soul to it, as it were.

The word "qawwali" comes from "qaul". Amir Khusrau was entrusted with developing it as a complete form of music, and he chose 12 young students to accomplish the task — and called them the qawwal bachcha.

It is through them that he presented Qaul Qalbana and other forms of qawwali.

Hazrat Amir Khusrau lives on in our hearts through his mystic poetry, his musical inventions, his simple riddles, kah mukarnis and wedding songs.

Which girl in North India has not left her house to the words of "Kaahe ko biyahi bides (why was I married and sent to a foreign land?)"?