With Andhadhun, Sriram Raghavan reaffirms his position as Bollywood’s master of the thriller

It is a niftily choreographed film, where each and every action has a consequence.

Writer-director Sriram Raghavan has already proved he knows how to spin a thriller (Johnny Gaddaar). With Andhadhun, he has made one that is constantly on the move, swerving with twists and turns, full of shocks and quirks to keep viewers intrigued about what happens next. The joy here is to see how Sriram Raghavan arrives at the foreseeable end. Akash (Ayushmann Khurrana) is the piano player providing the soundtrack, but it’s Simi (Tabu) who calls the shots in Andhadhun. (Photo: Screengrab)

Karma is a dish served blindfolded in Andhadhun. None of the key characters can be slotted in categories of right or wrong. The grey here isn’t just in the hue of the leading man’s eyes, but is present in all the characters that surround him and one that decide the course of his existence. This isn’t a whodunit or a howdunit, but more an examination of the extremes to which ordinary people go when caught in a mess of their own making.

Akash (Ayushmann Khurrana) considers himself not just a pianist, but an artist who has a severe notion of how to get the best out of himself. It’s an approach that’d give Van Gogh a complex — one that blurs moral lines and simultaneously delights. Akash is the most fascinating in Raghavan’s canon of ambiguous heroes, a young man with immense talent and a veneer of charm. Khurrana delights in giving his likeable manchild image a kick to play a character who finds himself trapped in a series of extraordinary and unfortunate events.

Akash is the piano player providing the soundtrack, but it’s a woman who calls the shots in Andhadhun. Simi (Tabu) is the younger wife of Pramod Sinha (Anil Dhawan), a 1970s actor stuck in the glorified past. Through Sinha, Raghavan and his four co-writers venture into deliriously fun terrain. Dhawan revisits songs of his own films and resides in a swanky apartment where each wall holds an image of his youth. It’s impossible to imagine anyone but Tabu pulling off this Lady Macbeth, even if we have seen her play this woman before. This time around, there is humour, too, on the dark edges. 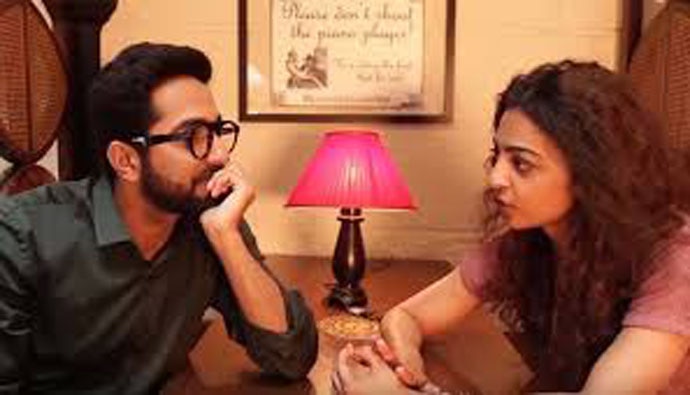 Radhika Apte is a riot in her supporting part as the woman who witnesses the proceedings as an alarmed spectator. (Photo: Screengrab)

What makes Andhadhun stand out as a suspense thriller is that Raghavan is not interested in the crime itself, but the psychology of the people involved in it.

It is a niftily choreographed film, where each and every action has a consequence. Each character here has a significant role to play in the unfolding drama irrespective of the screen time, be it the rabbit or Zakir Hussain’s doctor with family problems. Radhika Apte is a riot in her supporting part as the woman who witnesses the proceedings as an alarmed spectator.

For a film that thrives on artifice, Raghavan’s biggest accomplishment is how credible he makes the events, tying the many threads together. At times, though, the film indulges in its own cleverness and drags. Nonetheless, Andhadhun is that rare film one will revisit to read and appreciate the many details that may have been missed on the first watch. After all, if Andhadhun proves anything, it is that what you see is not what you get.