Here’s a fact. You can’t kill Thanos. With death literally by his side at all times, the mad Titan, often regarded as the big daddy of villains in the Marvel universe, is an omnipotent being. He’s not a God. A demigod perhaps, but no, not a God. Much like any other super villain in the Marvel universe, Thanos believes genocide is the sole path to salvation. But then, even demigods err. The same is true about Thanos and his 50 per cent apocalypse formula. Unlike any other Marvel super villain though, Thanos is as human as human gets, even though the human we are dealing with here clearly needs help. He’s in love. With death. Or Lady Death, to be more precise.

Thanos, since the dawn of his very existence, has strived relentlessly for her affection and approval. He keeps trying, and trying, and then some more, wiping off stars and piling up corpses, just so he can impress Lady Death.

His fascination for destroying half the universe, in fact, originates from the mind of death herself.

All in vain. She just won’t reciprocate. Anything and everything he does for her – for her love – is never enough. It will never be. So what does he do then? He strives to become as powerful as death. Perhaps then, she’ll treat him like an equal, and wed and bed him eventually. Yes, I know. Thanos is twisted. Let’s move on now. This is where the Infinity Gems/Stones come into the picture. There are six of them – time, reality, space, power, the soul and the mind – scattered across the universe, and the one who gets hold of them all can quite literally command all that there is. With a mere thought.

The Infinity Gauntlet that Thanos wields, and destroys worlds with at the snap of his fingers, is largely meant for pictorial representation. Bottomline, he becomes stronger than death. The rest as they say is history.

But here’s another fact about Thanos. He’s smart and powerful enough to get what he wants – 9 out of 10 times – only to lose it all in the blink of an eye. They say that’s because deep inside, he knows he’s not worthy. I know, right! He has a soul. Conflicting and in dire need of help, but a soul, nonetheless. One more thing that makes him human, and sets him apart from the other super villains in the Marvel universe. 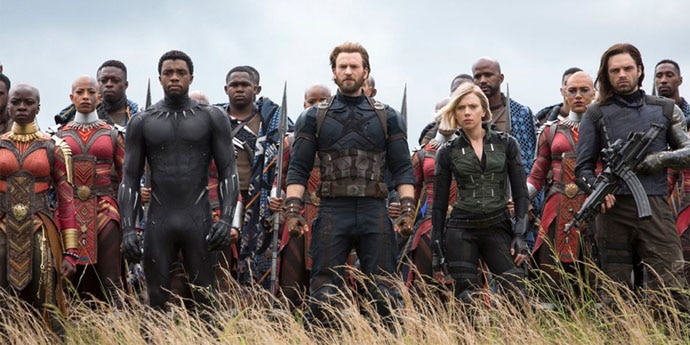 No wonder he’s been able to acquire all the Infinity Stones a number of times, becoming the all-supreme, only to be tricked into giving them away soon enough.  The same will likely happen in Avengers 4 as well, although I’d suggest you don’t put your money on it. They turned around Thanos quite a bit in Avengers: Infinity War. Who knows what will happen in the next instalment. But that’s the thing about a character like Thanos. You can’t fit him in a motion picture, at least, not in his entirety. And expect to fit in all the others as well.

Here’s one more fact. It has taken more than just the Avengers (and the Guardians of the Galaxy) to bring down Thanos all the times that he’s been able to get hold of all the Infinity Stones. Just to get that pesky glove off of him.

Thanos is larger than life in the comics. In terms of both power and intellect. The fact that Marvel Studios and Disney decided to focus on Thanos – in a film that’s inherently supposed to be about the Avengers – as the central character, and needed not one but two films to tell the whole story, in itself speaks of the scale that we’re dealing with here.

Although word around town is that Avengers 4 wouldn’t likely be a direct successor to Infinity War, if you’ve seen Infinity War, you’ll know Thanos is here to stay. A Thanos who may have been stripped off his back story, but is still as madding and conflicted as ever.

I have got to say, I was concerned when I first heard Thanos will be played by a CGI-enhanced Josh Brolin. CGI-enhanced Steppenwolf and Doom were bad. How would Thanos be any better?

As it turns out, he indeed is. Nay, way better than what I’d imagined. Full marks to the technical team that got almost every movement, every emotion right. You can actually feel the wrath of Thanos when he is at his maniacal best. You can sympathise with him, in moments of conflict.

Thanos reeks of pure violence and raw masculinity. But he is intelligent. And one who admires courage, even if it’s coming from those who oppose him. He’s evil but thoughtful. Although much like Apocalypse in X-Men, it’s really difficult to understand the motivation behind his nihilistic ways.

All we know is that he believes in balance, a notion that may have something to do with death, although death herself is missing from action here (if you know what I mean), so your guess is as good as mine on this one.

A greater portion of Infinity War is devoted to Thanos collecting the Infinity Stones with the help of his minions, the ones they call the children of Thanos. It’s up to the Avengers – and the Guardians of the Galaxy – now to stop Thanos from doing that, as expected. Just like it is in the comics.

Which invariably means there’s a seemingly hopeless number of characters packed into this story. Filling in characters is one thing. Giving them identity is another. What with Thanos being the central character, you’d think, the Russo brothers would have a hard time juggling the others. They don’t.

Anthony Russo and Joe Russo continue their fine form – from the Age of Ultron – and formula of grouping often unlikely characters into factions, and letting their chemistry do all the talking. That we already know a lot about these characters – after seeing 18 films in the franchise – before entering the theatre of course helps. 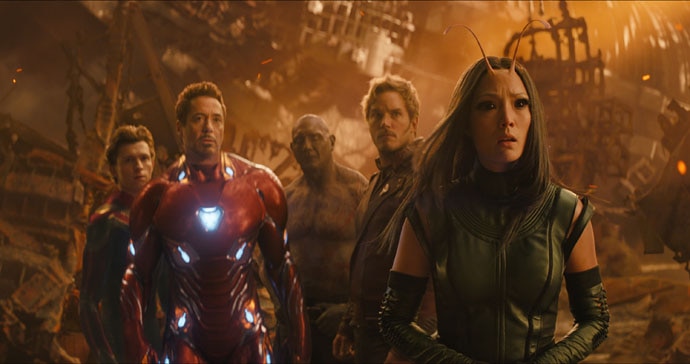 Imagine Tony Stark paired with Dr Strange. Or Thor paired with Guardians of the Galaxy. Some of the best one-liners – and laughs – actually come from such unusual pairings. There’s budding romance, and awkward hellos. There’s arrogance and ego, and lots of good-to-see-yous. Then there’s death. Or something of that sort.

I have been trying hard to not give away many spoilers but those of you who’re going into theatres thinking Infinity War will be just another Marvel film where your heroes always win, well, you’re wrong. Infinity War is unlike any other Marvel film we’ve seen in the past. It has Thanos. And Thanos gets the Infinity Stones. So, a lot of the Avengers – and the Guardians – die.

I won’t name them. I won’t give you a number either. All I’ll tell you is, it’s not surprising. It happens all the time in the comics. It’s okay to die. But then, no one dies for long in the world of comics. Hopefully, no one will die for long in the film as well, although I think a few of them will be gone for good.

The bigger picture here is that Infinity War is the most grown-up – and the darkest – film that the Marvel Cinematic Universe (MCU) has ever seen. It took a decade coming, but finally, Marvel has learnt the art of living, or shall we say dying: a tectonic shift in how these films have always been.

Marvel films have always been predictable. You knew, whatever may be happening in the beginning and in the middle, in the end your friendly neighbourhood superhero would always steal the show. Everything changes with Infinity War. A Game of Thrones-inspired red wedding may be on the cards anytime now, but rest assured, the empire will strike back. New heroes will emerge. And in the case of Avengers 4, a new heroine.

Also read: What I learnt after spending five decades in showbiz

#Iron Man, #Thanos, #Marvel universe, #Avengers: Infinity War
The views and opinions expressed in this article are those of the authors and do not necessarily reflect the official policy or position of DailyO.in or the India Today Group. The writers are solely responsible for any claims arising out of the contents of this article.

He is scribbler at India Today Tech and part-time moviebuff.