Axone: A feast for the senses from the Northeast

By following a day in the life of Northeastern characters in the capital, Kharkongor shows us the prejudices they face, the and the issues they grapple with on a daily basis.

A young group of friends converge in an apartment in Humayunpur, Delhi. Their mission is to prepare a feast using a special Naga ingredient, axone, a fermented soya bean paste. Its pungent odour puts off many. So begins a comedy of errors to find a place where they can make the dish without disruption and judgement. 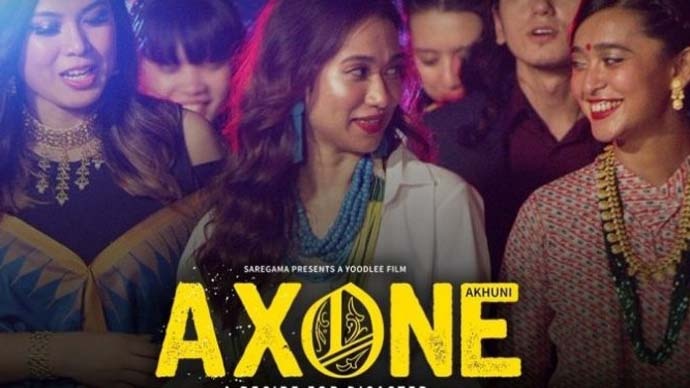 Directed by Nicholas Kharkongor, Axone releases on Netflix on June 12.

Sayani Gupta plays Upasna, an outsider of sorts as she’s Nepali in the otherwise Northeastern gang. “Upasna is confused and insecure and I guess I was also insecure,” says Gupta who hails from Kolkata. “In a way, real-life was playing out in her story.” Directed by Nicholas Kharkongor, Axone releases on Netflix on June 12.

Having auditioned and selected over Nepali actors for the part, Gupta had her work cut out to get the diction right. “Authenticity is everything,” she said. “Anything that is a little away from the life I lead, I need to work extra hard to get it right.” It was a beautiful coincidence that Gupta, two months before Axone’s shoot, co-produced and shot for a film in Nepal. There a junior alumnus from the Film & Television Institute of India rehearsed the lines with Gupta. During the shoot in Delhi, she relied on Maria, her Nepali hairstylist who also became her dialect coach. “After every shot, I’d look at her for approval,” said Gupta. “It was sweet of her.”

What helped most was Kharkongor’s precise writing. “The script was written in a way that it told you how she speaks would have a tempo and tonality,” said Gupta. “I went with my instinct on how she’d sound.” The result is a rhythmic delivery that highlights Upasna’s energy as well as her eager-to-please attitude. Gupta is aware of the relevance of Axone especially at a time when Northeastern people have been subjected to verbal and physical attacks because of their appearance.

By following a day in the life of Northeastern characters in the capital, Kharkongor shows us the prejudices they face, the and the issues they grapple with on a daily basis. Gupta is familiar with the disturbing gaze with which migrants from North East are viewed. In LSR College, she was in a campus with students from states such as Manipur, Mizoram and Nagaland. Her closest friends are from Assam and Sikkim. “They get asked ‘Are you from Korea?” said Gupta. “There is so much ignorance and racism.”

For Gupta, the film becomes more “effective” as Kharkongor documents a less-seen community in Indian entertainment with “an innate sense of humour” and offers a “balanced perspective”. The characters are victims of bigotry but also are flawed.

Also read: Why I set my crime fiction in the Northeast