#MovieReview: Badhaai Ho un-romanticises ‘Maa’ and ‘Baba’ and knocks them off the pedestal

Are parents just parents, or are they human beings too?

It was one of those long summer days. The only thing that gets you through it is the hope of a torrential downpour at night. Jeetender Kaushik looked up at the overcast sky on his way back home and said to himself, “Aaj baarish hogi.” He and his wife, Priyamvada, finish dinner; clean up in the kitchen and retire into their bedroom, when they hear the roar of thunder and lightning. Jeetendra cranes his neck out the window and says, “Baadal bade garaj rahein hai aaj.” They cosy up in bed, he starts reading to her from a magazine, he just had his poem published and he wanted to share his brief moment of glory with his wife. She listened intently. It was their time, their exclusive time together and no one could interrupt. Not even the rains.

It did rain that night, though. It was magical.

Bollywood has painted similar portraits of passion in the past — Roop tera mastana, anyone? — but as far as my memory goes, the lovers were nothing like Jeetendra and Priyamvada. After all, there’s nothing romantic about a 50-year-old married couple, living in a cramped government quarter with their two grown-up sons and an ailing mother. Which is why the obvious outcome of Bollywood’s obvious metaphor garnered an obvious reaction from the ‘samaaj’. That of utter disbelief.

Nineteen weeks after that night Gajraj Rao’s Jeetendra and Neena Gupta’s Priyamvada find out they’re expecting their third child. And if the judgemental eyes of Dr Mrs Jagga was not enough, they had to now figure out how to break the news to their bada beta Nakul (Ayushmann Khurrana) who’s of ‘marriageable age’ (whatever that is) and chhota beta Gular (Shardul Rana) who’s prepping for board exams.

Things don’t go down well with them. There’s some not-so mellow drama and some uncomfortably funny exchanges, sprinkled generously with ‘log kya kahenge?’

Badhaai ho-messages poured in from the entire mohallah, the snide remarks came with them — the auntyjis were jealous of the attention Priyamvada still seemed to get from her husband and the unclejis were just plain proud of their brother’s phallic achievements. Parallel to this ran the sledging, the friendly banter that forced Nakul to isolate himself from his chai tapdi friends and his girlfriend Rene (Sanya Malhotra), and got Gular into a brawl with his schoolmate. 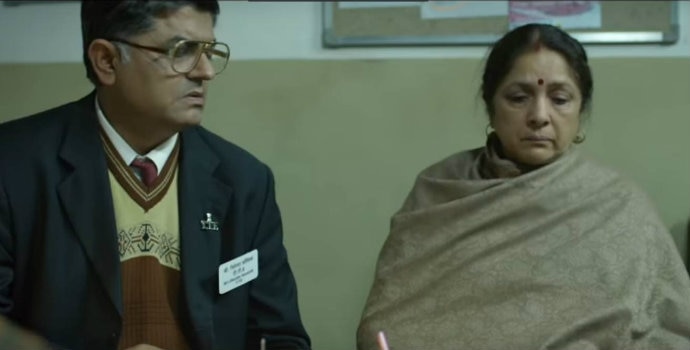 Something something, more drama, breakup something sad song, emotional upheaval something something later the Kaushiks get back on track, even if it is in their near-antic Wagon R. But the point they make in the process is unique. Are parents just parents, or are they human beings too?

Talking about sex has always been like walking a tight rope in India, no matter the age. Until you’re married, ‘cuz that’s when you’re supposed to do ‘it’ — proactively, enthusiastically, resolutely — with the intention to procreate. And then you’re supposed to stop again. Like be a celibate, earn your daily bread, bring up the fruits of your corporate merger, and ditch “Floyd for Anup Jalota.” 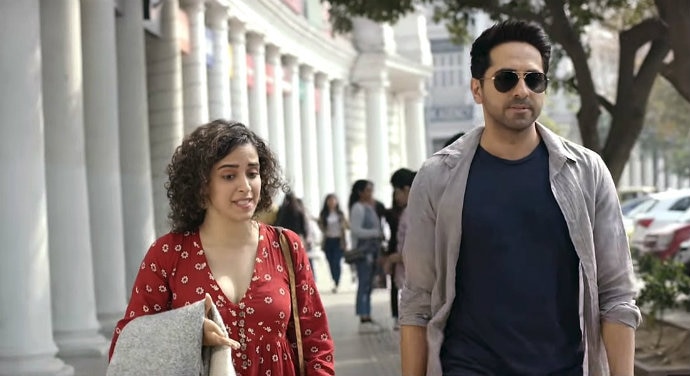 So what happens when the formulaic pattern of life is disrupted thus? Should the children ‘forgive’ their parents for the ‘mistake’ they’ve made or should they forgive themselves for dehumanising their parents, essentially a man and a woman, and putting them up on a pedestal, built on societal stereotypes of familial relationships, traditions and sanskar. Can we ever stop looking at our Maa and Baba as an idea and start looking at them as people?

Amit Sharma’s Badhaai Ho boldly goes where no Hindi film has gone before. And has truck loads of fun in the process. You cannot not rave about Neena Gupta as you step out of the theatre, and go tch-tch over how this powerhouse of talent was begging for work just a few months ago on social media. Gajraj Rao is immaculate as the middleclass family man madly in love with his wife and her wrinkles, not despite it. Sanya fills up the frame with her megawatt smile. Surekha Sikri as the matriarchal, stereotypical mother-in-law is flawless. In parts the film might seem a bit OTT, but Amit masterfully tightens the strings just when Badhaai Ho is about to tumble over the edge and into crass territory. It’s tongue and cheek, snarky, and satirical, which is perhaps the best approach when attempting to reorient our minds to the image of Mother India — those who get it, get it, those who don’t, are at least not offended.

Post your comment
#Movie Review, #Bollywood, #Amit sharma, #Gajraj rao
The views and opinions expressed in this article are those of the authors and do not necessarily reflect the official policy or position of DailyO.in or the India Today Group. The writers are solely responsible for any claims arising out of the contents of this article.