Bharat Bhushan: Bollywood's original chocolate boy suffered many tragedies but this is how he will be remembered

The songs picturised on him in various films are among the classics of Hindi cinema.

Poet, singer, musician, prince, saint or king. These were the roles that mostly came his way due to his looks. He looked just perfect while playing these sensitive roles that made him extremely successful in the 1950s and 1960s.

The 1970s were far from kind to him and later, he sank into poverty and oblivion. It is his 99th birth anniversary today (June 14). This celebrated actor, the original chocolate hero of the Hindi film industry, was Bharat Bhushan, who had become quite a rage, especially among female fans, after he established his special look and acting capability with Vijay Bhatt's Baiju Bawra (1952). 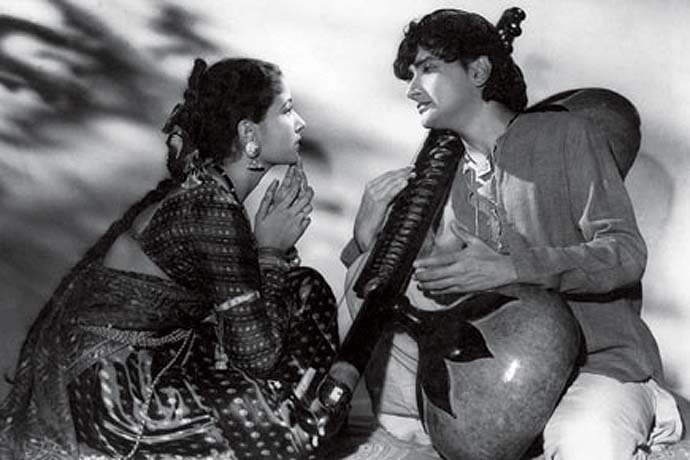 Bharat Bhushan proved his acting prowess with Baiju Bawra. (Photo: A still from the film)

The film in which Meena Kumari was his co-star was a huge box-office hit with its unforgettable music. Naushad's classical music in the film was something new and was received very well. With this film, Bharat Bhushan and Meena Kumari joined the big league. Baiju, the young musician with a tousled mop of a bit longish hair and a lock falling on his forehead, was a character that could not have perhaps been essayed by any other actor as it was by Bharat Bhushan.

He stood apart from the other actors of his time with this sensitive look of an artiste, gentleness and simplicity. This is why he could create such an important place in the industry in the years when the trinity of Dilip Kumar, Raj Kapoor and Dev Anand was ruling the screen. Bharat Bhushan in Shri Chaitanya Mahaprabhu. (Photo: A still from the film)

In 1960, came another classic named Barsaat ki Raat which saw Bharat Bhushan play a poet and singer called Amaan Hyderabadi. His on-screen chemistry with the legendary beauty, Madhubala, came across strongly in this film about poetry and music. The film was a Muslim social. The manner in which Bhushan sings the famous Qawalis in this film re-strengthen the belief that he was suited well for the part.

"Zindagi Bhar Nahin Bhoolegi Woh Barsaat ki Raat" and "Maine Shayad Tumhe Pehle Bhi Kahin Dekha Hai" were the two Rafi numbers in this film that added to the effect of the character played by Bhushan. The songs picturised on him in various films are among the classics of Hindi cinema.

Most were sung by Rafi Sa'ab while some were sung by Talat Mahmood, Manna Dey and Mukesh. In Mirza Ghalib and Jahan Ara (1964), it was the soft voice and Talat who created the magic for Bhushan. "Dil e Nadaa'n Tujhe Hua Kya Hai", "Phir Mujhe Deeda-e-tar Yaad Aaya" and "Ishq Mujhko na Sahi Wahshat hi Sahi" were Ghalib's ghazals sung by Talat.

These songs make it impossible to forget Bharat Bhushan. Despite all the tragic roles he played, his luminous smile stole many a hearts during some light-hearted or romantic scenes. Bharat Bhushan won many hearts with his romantic scenes. (Source: A still from one of his movies)

When one thinks of how this shining star fell on bad days and had nothing with him when he died, one can say that his on-screen tragedies were nothing compared to his real life reality faced in the later years.

Bhushan played very small character roles in the 1970s and 1980s (in Chandni he appears for two minutes as a doctor). In 1969, he appeared in Pyar Ka Mausam as Shashi Kapoor's father, a role which was made memorable by the Kishore Kumar song "Tum Bin Jaaoon Kahaan". The last film in which he appeared as the protagonist was Taqdeer (1967), which had a song that pulls at the heartstrings of anyone who cares to listen to it. The song, "Jab Jab Bahaar Aayi Aur Phool Muskuraaye, Mujhe Tum Yaad Aaye".

A commendable performance by Bhushan and Farida Jalal (as his daughter) makes the film very interesting. Here he plays a music teacher.

Bharat Bhushan in Sangeet Samrat Tansen. (Photo: A still from the movie)

Famous Urdu poet Sahir Ludhianavi once said that if anyone looked like a perfect poet it was Bharat Bhushan! His dreamy eyes and long eyelashes added to this image.

Bhushan worked with the topmost heroines of the day, including Madhubala, Meena Kumari, Nutan, Beena Rai and Mala Sinha. Some wrong decisions while producing films became responsible for his downfall. This bibliophile used to live in his own world of books and dreams.

He had quite a dream-like life before destiny stole away everything from him. Despite whatever happened to him later, Bhushan will always be remembered for his films and their lilting songs that so often talk of suffering and tragedy.

#Jahan ara, #Baiju bawra, #Madhubala, #Bharat bhushan
The views and opinions expressed in this article are those of the authors and do not necessarily reflect the official policy or position of DailyO.in or the India Today Group. The writers are solely responsible for any claims arising out of the contents of this article.