As the couple shoot their first-ever cover in India, they open up on home, happiness, and hidden secrets.

Kunal Nayyar is absurdly normal. It takes a moment to place him in an almost-empty bar on a Sunday morning, because nothing about him screams “star”. He tells me that he has overdone the butter chicken in Delhi (who hasn’t?); that he nearly had a panic attack when he met the Queen at Buckingham Palace early last year; that the flat-ironing for his role in The Big Bang Theory has ruined his hair; and that his morning routine includes phone calls to his parents in Delhi and chai and biscuits with wife Neha Kapur Nayyar and Boba. This is when he stops to show me a photograph of their rescue dog, also known as Boba Fett — they imagine he would have a thick British accent if only he could speak. Kunal’s stories are relatable even when they’re about royalty. But because he regards normalcy as “just a concept”, I’ll rephrase: Kunal is authentic.

I see the same trait in Neha, who rejects an extended hand for a bear hug instead, wears her greying hair with utmost grace, and laughs openly, honestly, brilliantly. Within minutes of arriving, on time, for the shoot, she tells me they prepped with a stem cell mask at home. Contrary to what her makeup-free skin may suggest, she’s the first to admit she doesn’t "wake up like this". And it doesn’t feel strange to ask her exactly which mask it was — the recommendation seems less "how to look like a supermodel" and more one that comes from a friend you trust. What’s remarkable is that despite being married to a man who’s hard to escape — literally, The Big Bang Theory is playing on television as I type this — Neha’s identity isn’t tied to his. Two years since she launched Hensely in the States, it has become the fashion label for timeless, minimal designs. A lesson in quiet luxury, inspired by her roots in India. “My mother always wore beautiful saris, and had an intrinsic curiosity about weaves. She would put together different drapes from across the country, and wear them with such ease. I realised a lot of it had to do with flow, with less fuss. I also trained in Indian classical dance — kathak for four years and bharatanatyam for 10 — and the movement aspect of it is also part of the Hensely aesthetic. The next step is to definitely have a footing in India,” she says.

This inherent, undeniable connection with India is also what sets apart Kunal. Rajesh Koothrapali, his role on The Big Bang Theory, arguably the biggest show on television, was perhaps the first portrayal of an Indian in the West that didn’t make me cringe. He isn’t a token character, he doesn’t speak like Apu from The Simpsons, and his problems have nothing to do with race but everything to do with geekiness, awkwardness, and plain dysfunction. 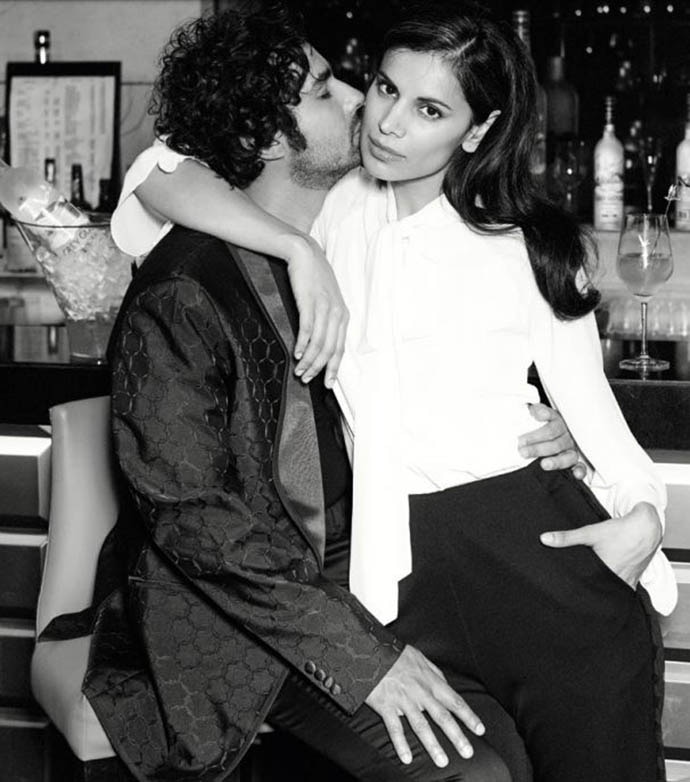 And yet. There’s a section of the audience that continues to deride him for being racist towards Indians. A scene from a recent episode featuring a cricket match particularly came under fire for ridiculing the names of Indian players. “It really hurts my feelings. The point is not to degrade your culture but to point out its idiosyncrasies and laugh at them. That’s the point of comedy,” he says. Off-screen, too, he owns where he comes from. “I still feel I work in LA and live in Delhi, even though I come back only once a year during Christmas. I wear my identity on my sleeve. I’m Indian — it’s not everything I’m defined by, but I’m proud of my culture. I didn’t come to America to escape India.”

Identity, though, seems to preoccupy him now. Between shots, he reads Vaster Than Sky, Greater Than Space by Mooji, a book that addresses the profound question of who we truly are at our centre. Perhaps it’s even more pertinent now that The Big Bang Theory, which is in its 11th season, appears to be winding down. “It’s important for me to now break the mould of being a sitcom actor. You get a stigma attached to you that you can be this kind of a character, especially because he [Raj] is so specific and, to break that, I have to do something more dramatic,” he says. In fact, he’s already signed a movie, Sweetness in the Belly, opposite Saoirse Ronan, which begins shooting later this year, and a play he starred in, The Spoils, with Jesse Eisenberg may well be on its way to Broadway.

Professional commitments aside, this is the year Neha and Kunal hope to dedicate to the family they’ve left behind in India. “I think we’ve realised, over the years, living so far away, we miss a lot — birthdays, deaths, anniversaries, weddings. We’ve decided to make an effort to come home more often, travel more,” says Neha. “It’s about making more memories.” 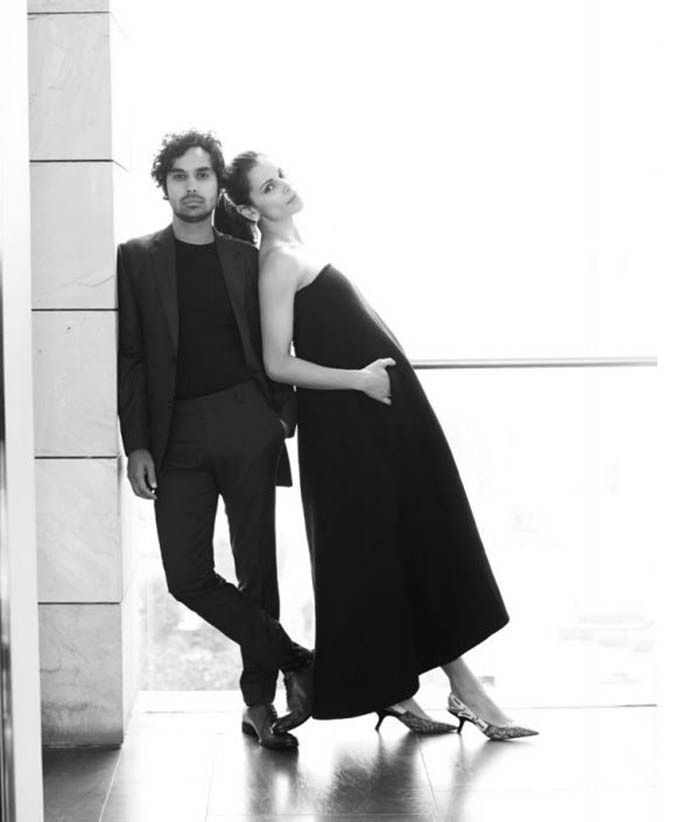 What’s better than meeting the Queen?

K: I get to meet the queen every day of my life.

K: Not good, no? I wrote that last night.

Your first thoughts when you met each other?

K: She’s tall and way out of my league.

N: He was wearing a red and white trucker hat and I thought that was interesting.

A secret you’ve kept from each other?

K: Where do I start? I’ve probably played more golf than she knows I have. Sometimes I’ll sneak out of the house on an excuse but I’ve actually gone to play golf.

N: I shop online and he doesn’t know about it.

K: I’ll ask her what she’s doing, and she’s like emails or researching.

How did you know he/she was the one?

K: When I saw how she was with my family. There was an unspoken language between her and my parents, my cousins. I realised that if I were to have a partner in life then this would be the person. This is a person who is inclusive. This was a day after we had met [New Year’s Eve, 2009, at the erstwhile The Zoo bar in Delhi], and I had invited her home for a party I was having.

N: When I did go to see him in LA and we spent some time alone, I realised being with him was very natural. It didn’t feel like we had to try. I had never felt like that before.

Were you looking to commit at the time?

K: She was not. I wasn’t ready to settle down either, but I knew that if I did meet someone, I would want to have a relationship with them. I had been single for a year-and-a-half, and I did want something serious.

What does it take to sustain a marriage?

N: Space. The fact that we’re married doesn’t change the fact that we are individuals, and still have our own lives. Of course we’re companions and we go through life together, but it’s not like a bound situation.

K: You should definitely have freedom in a marriage. The most challenging part of marriage?

K: We had never lived together before we got married, so that was a big learning curve. Suddenly you have to figure stuff out together. We’re two people with strong personalities. But in the end you have a friend. It’s nice to navigate this world with someone.

N: I had left my life here at 28 — my friends, family, and career — and had to start all over. That took a little time. It became much easier once I started my own business and had a life independent of the one that I had walked into.

K: Last year we were sitting around at dinner with friends, and we somehow started talking about Cabo. Neha had never been to Mexico and I had been to Cabo once and gotten sick so I didn’t want to go. (I picked up a stomach bug that lasted almost two years.) But we decided to just catch a flight and go to Cabo. We’re such planners. It’s important now to add more spontaneity, chill out, and let life happen.

How hard is that?

K: You have to get out of your own way, right? Depends on how stubborn you are.

What’s your best memory of each other?

K: Seeing Neha’s face for the first time when we got married. It hit me that it was real. She looked so happy and beautiful. It’s ingrained in me. We’re very lucky, we have very good memories together.

N: Last year on Thanksgiving, Kunal and I decided to leave LA and go to Tuscany. We went to Lucca — a tiny, walled city — rented bikes, and rode around. It was freezing! That was really special. What do you enjoy doing together?

N: That’s our thing. We love finding new restaurants. And we also read by the fireplace.

Favourite qualities about one another?

K: She includes people. If we’re out somewhere or if we have a new guest, she’ll go out of her way to make them feel comfortable and at home.

Neha, is there a quality of Raj’s you wish Kunal had?

#Marriage, #Relationships, #Kunal nayyar, #Big Bang Theory
The views and opinions expressed in this article are those of the authors and do not necessarily reflect the official policy or position of DailyO.in or the India Today Group. The writers are solely responsible for any claims arising out of the contents of this article.